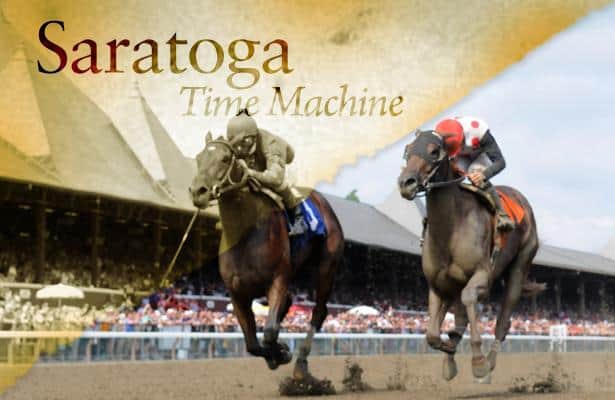 The Saratoga Time Machine travels back to the 1982, a banner year at the Spa, when the stars on the racetrack included Copelan and future champions Conquistador Cielo, Gold Beauty, and Lemhi Gold. Gasoline cost 91¢ a gallon, the Dow Jones Industrial average was 1,096, and the Federal Reserve interest rate was 11.5%. E. T. the Extra-Terrestrial was in the theaters, Michael Jackson’s Thriller was released, and the first Smiley emoticon was used in e-mails. Ronald Reagan was President and George Bush was his Vice-President. San Francisco won the Super Bowl and St. Louis took the World Series in seven games.

On the racetrack, Gato del Sol won the Kentucky Derby, Aloma’s Ruler took the Preakness, while Conquistador Cielo got the Belmont Stakes victory. Those three would meet during this very special year at Saratoga.

Weekend Surprise, a daughter of Triple Crown winner Secretariat won the Schuylerville in 1982, one of three stakes wins in that year. Although she would win seven races and over $400,000 in her career it was as a broodmare that she had remarkable impact. Her famous offspring include the 1990 Preakness winner Summer Squall and the 1992 Horse of the Year, AP Indy.

Gold Beauty – This three-year-old daughter of Mr. Prospector put together a six race win streak in 1982 that spanned her maiden victory and the Fall Highweight Handicap and included a win in the Test at Saratoga. She would subsequently be named Champion Sprinter, which at the time was awarded without a gender designation.

Silver Buck – Owned and bred by C. V. Whitney, this son of Buckpasser followed up a win in the Suburban Handicap with a victory in the race named for that royal family of Saratoga, the Whitney Handicap. Silver Buck’s win in 1982 was the fourth in this race for C. V. Whitney. Five other times the family’s Greentree Stable won the race.

Lemhi Gold – As a four-year-old in 1982, Lemhi Gold established himself as a powerful turf horse, first on the west coast and then at Belmont in the Sword Dancer. Shortly after, the Laz Barrera trainee secured the Eclipse Award as Champion Older Male Horse when he moved Lemhi Gold to the dirt first with a fourth place finish in the Whitney against Silver Buck and then with wins in the Marlboro Cup and the Jockey Club Gold Cup. He finished a very close second in the voting for Horse of the Year behind Conquistador Cielo.

Copelan – This Fred Hooper homebred son of Tri Jet and Susan’s Girl swept both the Sanford and 10 days later the Hopeful at Saratoga. Susan’s Girl was a millionaire and three-time champion who herself was bred by Hooper. He was named for Dr. Robert Copelan, a leading veterinarian, who performed surgery on both the dam and sire during their careers. As a juvenile sensation, Copelan finished in front in his first six races including the Futurity and Champagne at Belmont. Note, that he was disqualified from the purse money for a medication violation in his career second race. He lost the division championship when he was beaten by Roving Boy in the Hollywood Futurity.

Conquistador Cielo – In the Jim Dandy, the Belmont stakes winner would be sent off at odds of .10-1, where he carried 128 pounds compared to the other three runners who had only 114. The son of Mr. Prospector sandwiched a win in the Dwyer between the Belmont and the Jim Dandy. Thirteen days later, he would end his career with a third place finish in the Travers, but was still named Horse of the Year and Three-Year-Old Champion. He was syndicated as a stallion for a then record total of over $36 million.

Runaway Groom – In a five-horse field that included all three winners of the Triple Crown races, Conquistador Cielo was sent off as the 2-5 favorite in the 1982 Travers. It was, however, the gray long shot from Canada that would light up the tote board with his upset victory. After Aloma’s Ruler and Conquistador Cielo battled head to head most of the way around the track, Runaway Groom was able to rally from last down the middle of the track to get the win.

1982 was a remarkable year at Saratoga, when there was only racing upstate during the month of August. Yet, it was not unusual for these horses to face the best competition more than once during that four-week meeting.