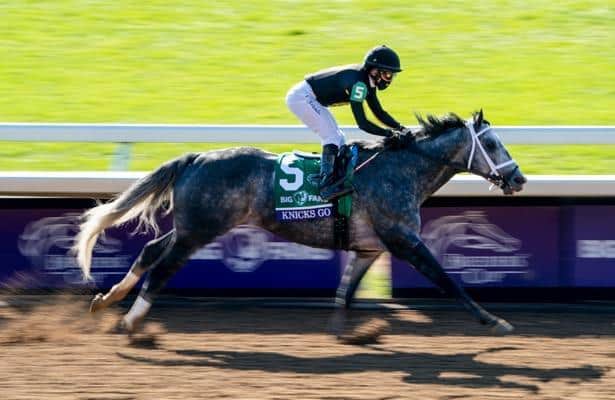 As it turns out, Bob Baffert will not have the chance to win his third Pegasus World Cup (G1) on Jan. 23. First, Baffert had to retire last year’s winner, Mucho Gusto, after a soft tissue injury. Then he announced that the likely favorite, Charlatan, would take more time to prepare for the Saudi Cup next month instead.

Entry in the $3 million, 1 1/8-mile Pegasus is by invitation only, and the horses must run free of all race-day medication.

[RELATED: No Pegasus Turf this year — what's next for Zulu Alpha?]

The Pegasus World Cup committee and Gulfstream Park released an initial list of 16 possible horses for the race that was divided with 12 listed as “invitees” and four as “reserve invitees.”

Since, trainer Peter Miller opted to run Anothertwistafate in the Pegasus Turf (G1) and both of the Baffert runners will not be part of the race. As a result, Math Wizard and King Guillermo drew into the field from the reserve invitee list. So, with only Idol left on the AE list, the Pegasus committee added Independence Hall and Coastal Defense as extras.

Here is a projected look at the field for the Pegasus with possible morning line odds from Horse Racing Nation. The 12 horses given first preference are (in alphabetical order):

Code of Honor (4-1 – Noble Mission – S. McGaughey/J. Velazquez – 15: 6-4-2 - $2,644,320). The now 5-year-old had only one victory in 2020, and that came in his first start of the year in the Westchester (G3) on a muddy Belmont Park track in June. He was well bet in all four of his subsequent races, finishing in the top four in each of them, including three Grade 1s. That campaign has to be considered a disappointment for the Shug McGaughey runner. Since running second in the Clark (G1) at Churchill Downs, he has been training at Payson Park. As a 3-year-old he won the Fountain of Youth (G2) at Gulfstream Park. Can we expect Code of Honor to find the winner’s circle in his 2021 debut? Use underneath.

Harpers First Ride (15-1 – Paynter – C. Gonzalez/A. Cruz – 17: 10-2-1 - $573,055). This Laurel Park-based runner is the winner of his last two starts in listed stakes at the Maryland track. His career record looks impressive, with 10 victories from 17 starts. Last year was the best of his career and included a win in his first and only start in a graded stake in the Pimilico Special (G3) on Preakness weekend. Still, this will be a significant step up in class. Toss.

Jesus’ Team (10-1 – Tapiture – J. F. D’Angelo/L. Saez – 13: 3-4-3 - $518,540). After hitting the board in three Grade 1 races in 2020 —  the Haskell (G1), the Preakness and the Breeders’ Cup Dirt Mile — Jesus’ Team was able to get his first stakes victory in the Claiming Crown Jewel at Gulfstream Park. All three of his victories occurred at the Florida track. His consistency needs to be respected and makes him worth considering in the trifecta. Use underneath.

King Guillermo (15-1 – Uncle Mo – J. C. Avila/J. Ortiz – 6: 2-1-1 - $355,350). King Guillermo made a splash on last year’s Kentucky Derby trail with his long-shot victory in the Tampa Bay Derby. He then was second in the Arkansas Derby behind Nadal but was sidelined and missed the Triple Crown races. From a seven-month layoff, he ran fourth in the Cigar Mile (G1) on a wet track. That was an ambitious spot for a comeback, and the Pegasus may also be a tough spot. Toss.

Kiss Today Goodbye (10-1 – Cairo Prince – J. E. Kruljac/M. Smith – 11: 3-0-3 - $230,802). This West Coast-based runner has won his last two starts, including an allowance at Del Mar, followed by his 15-1 upset victory in the San Antonio (G2) at Santa Anita on Dec. 26. That was his first win in a stakes race, and it came in a field of six. It earned him an invitation to the Pegasus, and he will be one of the longer shots as he makes his first start outside of California. Use underneath.

Knicks Go (5-2 – Paynter – B. Cox/J. Rosario – 17: 5-3-1 - $1,348,528). This Brad Cox trainee is in the top form of his career with three wins in a row, including a powerful front-running effort in the Breeders’ Cup Dirt Mile. He will bring plenty of quality speed to the Pegasus, and he is now the likely favorite in the betting. The defection of Charlatan gives Knicks Go a distinct pace advantage in his first start ever at Gulfstream Park going the mile and an eighth. One of Cox’s talents is his ability to keep horses in peak condition to sustain winning streaks. Top choice.

Math Wizard (20-1 – Algorithms – S. Joseph Jr./T. Gaffalione – 20: 3-3-3 - $1,139,440). Math Wizard found his way into the field from the also eligible list. Math Wizard has not won a race since his Pennsylvania Derby (G1) 31-1 victory in September 2019. In his next seven starts, he has been competitive only once, and that came in the Monmouth Cup (G3) in July behind Global Campaign. His other two wins did happen at Gulfstream. Toss.

Mr Freeze (15-1 – To Honor and Serve – D. Romans/M. Franco – 18: 6-4-1 - $1,595,600). It is hard to know what to expect from this 6-year-old. At his best, he is a graded stakes winner of the Fayette (G2) at Keeneland in October and the Gulfstream Park Mile (G2) in February. But when he faces Grade 1 competition, he has frequently been a disappointment. To his credit, he did finish second in last year’s Pegasus after setting the pace. It is unlikely that he will be able to be on the lead, but he has run well from off the pace. Use underneath.

Sharp Samurai (12-1 – First Samurai– M. Glatt/I. Ortiz Jr. – 25: 8-6-3 - $1,111,270). This 7-year-old gelding brings a streak of six races in which he has finished first or second while racing on both turf and dirt in California in only graded stakes. He has not won a race since October 2018. Last seen, he ran third in the Breeders' Cup Dirt Mile behind Knicks Go and Jesus’ Team. Half of his eight victories were at nine furlongs, but only one of them was on dirt. Toss.

Sleepy Eyes Todd (12-1 – Paddy O’ Prado – M. A. Silva/T. Gaffalione – 15: 8-2-0 - $744,825). Last year was a very good one for Sleepy Eyes Todd, who won four times including his last two starts going seven furlongs in listed stakes at Keeneland and Gulfstream. He has had success on the front end and coming from off the pace. He won the Charles Town Classic (G2) going nine furlongs in August. The Pegasus will be the toughest race of his career. Use underneath.

Tax (6-1 – Arch – D. Gargan/L. Saez – 13: 4-3-1 - $957,060). Tax returned from a seven-month layoff to win the Harlans Holiday (G3) at Gulfstream Park at odds of 2-1 by more than four lengths. He easily handled the field of seven in the local prep race for the Pegasus. Tax had big wins in his career in races such as the Jim Dandy (G2) and the Withers (G3) but has yet to put two victories together. His best effort makes him dangerous. Win contender.

True Timber (12-1 – Mineshaft– J. Sisterson/K. Carmouche – 25: 5-5-9 - $1,215,150). True Timber got a signature victory when he won the Cigar Mile (G1) at Aqueduct in December. The millionaire 7-year-old was able to take control midway through that race and draw off to win by more than five lengths on a sloppy track. He did not hit the board in his three prior starts at Gulfstream, including an eighth-place finish in the Pegasus last year. Toss.

Summary: Three of the first four winners of the Pegasus — Arrogate, Gun Runner and City of Light — prepped for the race with a victory in the prior Breeders’ Cup Championships. In this year’s field, Knicks Go could continue that trend after his win in the BC Dirt Mile.

Without Charlatan in the Pegasus field, the expected front-end battle between him and Knicks Go is gone and the Brad Cox runner now has a significant pace advantage. Tax, Mr Freeze, and Sleepy Eyes Todd all have raced on the lead in the past, but they don’t have the speed of Knicks Go. In his current form, he will be very hard to beat.

The bottom two spots in the trifecta have plenty of contenders in Code of Honor, Jesus’ Team, Kiss Today Goodbye, Mr Freeze and Sleepy Eyes Todd.

Americanrevolution adds to Pletcher's big day in Cigar Mile
On what was an eventful day for trainer Todd Pletc...