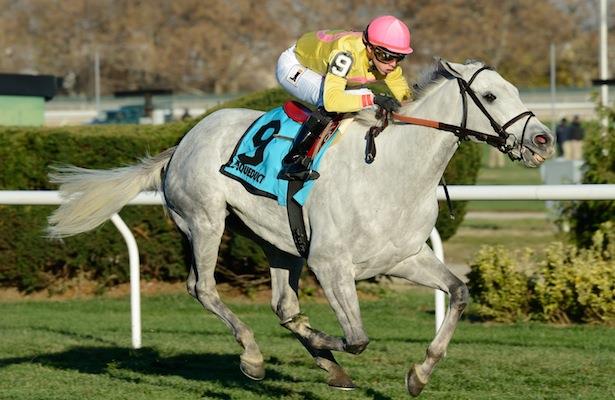 The name of the turf graded stakes race may have changed, but the trainer’s name stayed the same, as Chad Brown was in the Aqueduct winner’s circle again, this time for the $250,000 Red Smith Handicap (G3). Mr Maybe, guided by jockey Irad Ortiz Jr., made a strong closing move down the middle of the stretch to win the mile and three-eighths event by 4 ¼ lengths.

Mr Maybe, an almost white son of Ghostzapper, made his first stakes win a graded one in the Red Smith. Chad Brown became the fourth different trainer of Mr. Maybe in his now thirteen race career. Mr Maybe moved to Brown’s Saratoga barn this summer after being privately purchased by Michael Dubb and others. He won his first start for Brown at Belmont in October in an allowance race at the same 11 furlong distance as today’s race.

"We knew he was sitting on a really good race but how easily he won surprised me,” explained Brown. “He's a horse that has a lot of talent. We thought there was some room for improvement and he's taken to our program nicely. My staff has really enjoyed working with this horse - he's a big teddy bear - and he's only getting better."

After a mile, Ortiz eased Mr. Maybe to the outside and started to make up some ground. It was after the third turn, that they made their big closing move down the middle of the stretch. The early leaders had nothing left down the lane and the other horses that were making up ground were no match for Mr. Maybe. Kaigun, the 3.80-1 third choice, slipped up the rail for second place, and Holiday Star raced down the middle to take third.

Ortiz talked about his trip, "They told me he's the kind of horse you don't push too much and just to save ground. So I broke out of there and tried to save ground the whole way. By the half-mile, I knew they were going a little slow so I had to move. I went a little wide but I had horse and when I asked him, he just took off."

Brown sees a bright future for Mr Maybe, "We'll go down to Florida and freshen him up a little bit. After this performance today, we have big plans for him next year. I think a mile and a quarter to a mile and a half is his game, and I think this horse can get to the Grade 1 level."