Authentic, Tiz the Law in tight race for top 3-year-old 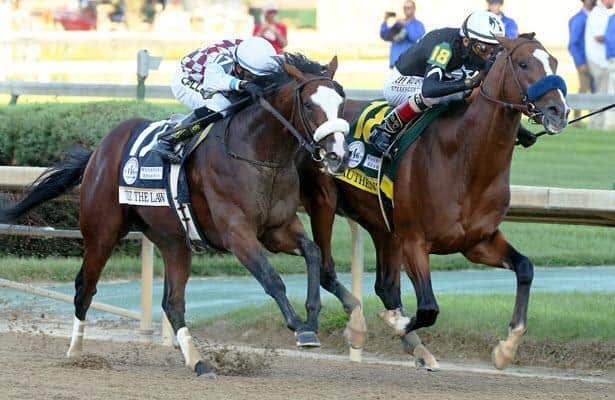 The week before the Run for the Roses, Tiz the Law received 10 first-place votes in the Top Thoroughbred poll, which includes horses of all ages and gender. After finishing second behind Authentic in the Derby, those 10 votes moved to Maximum Security who now sits securely as the No. 1 ranked horse in the country.

In the Top 3-Year-Old Poll, Authentic jumped from fourth to the No. 1 spot with 21 votes. Interestingly, Tiz the Law still retained 16 votes saying he is the best sophomore in the land. In the ballots of all 37 media members, the top two finishers in the Derby were No. 1 or 2, which meant that Authentic totaled 354 points and Tiz the Law was close behind at 349.

Admittedly, I was one of the 10 who switched his Top Thoroughbred vote from Tiz the Law to Maximum Security and also placed Authentic on top of the poll for 3-year-olds.

Tiz the Law headed into the Kentucky Derby with three Grade 1 wins in the Florida Derby, Belmont Stakes, and the Travers. Authentic left Churchill Downs with two Grade 1s in the Haskell and the Derby. No doubt, the 16 voters who stuck with Tiz the Law on top used that Grade 1 count as the measuring stick.

However, the Kentucky Derby is the country’s most famous race and is highly coveted in thoroughbred racing. Authentic won the Derby and in their only head-to-head race he defeated Tiz the Law and that earned the Bob Baffert runner 21 first-place votes.

In a bit of a surprise in the Top Thoroughbred poll, the first two finishers in the Kentucky Derby were ranked lower than I expected with Tiz the Law at No. 8 and Authentic at No. 9, separated by 17 points.

Trainer Barclay Tagg said that Tiz the Law is likely to skip the Preakness to prepare for the Breeders’ Cup Classic, while Baffert will send Authentic to Pimlico for the final race in the 2020 version of the Triple Crown.