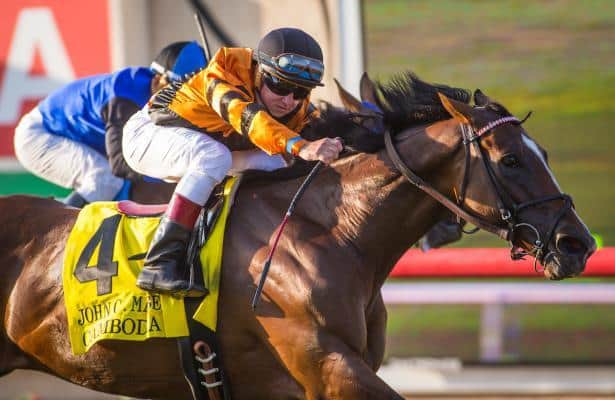 Run on the last day of the Del Mar fall meeting, the $300,000 Matriarch is also the final Grade 1 turf stakes of the year. The Matriarch has a distinct East versus West flavor as Chad Brown sends Rubilinda and Off Limits across the country in an effort to win his 10th Grade 1 on grass in 2017. To be successful he will have to beat the 3-1 morning line favorite, Cambodia, who hails from the California string of trainer Tom Proctor.

Five east coast horses can be counted in the full field of 12, with Race 7 on the card scheduled for 7:30 p.m. ET.

Mrs McDougal [ML 15-1 – R. Mandella/Castellano – 15: 5-0-3 - $496,736] This well-travelled former Grade 2 victor is winless this year and seemingly off form a bit. The mile is the preferred distance for this 5-year-old mare who has found some trouble in her last two starts while racing against several of the other horses from the Matriarch. Javier Castellano rode her last time in the Goldikova (G2) on Breeders’ Cup weekend. She will have to stay out of trouble and get back to her best form to contend here. Not Showing her Best Recently

Lull [ML 5-1 – Clement/Prat – 11: 4-3-1 - $668,057] The one syllable name hints that this filly might in part be owned by Claiborne Farm. Lull won the Autumn Miss (G3) at Santa Anita last out while racing close to the lead, earning a career high Beyer Speed Figure of 94 that makes her competitive with a lot of this field. However, she will need to register an even higher figure to compete for the win spot as she takes on older horses. Prat, who is being allowed to ride while suspended from non-stakes racing, stays on board. Taking on Older

Pretty Girl [ML 20-1 – Lobo/Blanc – 13: 4-3-1 - $228,836] This 6-year-old mare has never won a race in North America with her last victory coming in July 2016 at a lower level in France. Her closing style has earned her a couple of Grade 2 placings, most recently in the Yellow Ribbon during the Del Mar summer meeting. She should get a favorable pace scenario, but this spot looks too tough. Winless in 7 North American Starts

Belvoir Bay (GB) [ML 20-1 – P. Miller/Desormeaux – 16: 6-3-2 - $330,016] On the heels of his two wins in this year’s Breeders’ Cup, Peter Miller sends this speedy front-runner into Grade 1 company after a victory in the SK Maddy (G3) sprinting at Del Mar. No doubt this British-bred filly will help to provide a quick early pace, but it seems unlikely that she will be around after the mile. One of the Pacesetters

Insta Erma [ML 12-1 – Baltas/Nakatani – 14: 4-3-1 - $209,852] Here is another nice horse being asked to run against top-level competition. She had a very nice win going a mile in a restricted Santa Anita stake just last month, but she has had trouble keeping up against better horses. Nakatani rode her for the first time in her last race victory. No doubt they will try and rally to get a piece of purse money. A Lot to Ask

Thundering Sky [ML 20-1 – Weaver/Maragh – 16: 3-4-3 - $356,790] George Weaver sent this 4-year-old West to get a very nice second place finish in the Goldikova behind Kitten’s Roar. If I had to choose between this one and the previously mentioned 20-1 shots, I would stay with the No. 6. That recent second came after a three-month layoff, thus Weaver left her to train at Del Mar expecting improvement. Improvement Expected

Cambodia [ML 3-1 – Proctor/Van Dyke – 14: 6-0-6 - $623,746] This daughter of War Front may have a class edge on this field after a very strong third-place finish in the Breeders’ Cup Filly & Mare Turf. She missed the win by only 1 ¾ lengths against a star-studded field of 14. She has two consecutive 101 BSFs going back a race to her win in the John C Mabee (G2). She has not missed the board since she broke her maiden. Her 3-1 morning line price would be very generous. The One to Beat

Off Limits (Ire) [ML 5-1 – Brown/Rosario – 16: 6-2-1 - $454,680] Another in the long line of horses that the team of owner Martin Schwartz and Chad Brown have successfully brought over from Europe. She has the highest career BSF in the field of 105, which came in the mile Noble Damsel (G3) at Belmont Park. She followed that with another win in the Athenia (G3). She will be among the group running late. Respect this Brown Runner

Rubilinda [ML 10-1 – Brown/Jose Ortiz – 4: 3-0-1 - $240,400] No way this lightly raced 3-year-old will be 10-1, not with Brown as the trainer and the great Frankel as the sire. The youngster has two consecutive stakes wins in races restricted to her age group. She has improved with experience in every start, but she is making a significant class jump here. We will certainly find out just how good she is here. How Good Is She?

Hawksmoor (Ire) [ML 8-1 – Delacour/Leparoux – 15: 5-1-5 - $779,739] This one hails from the Lael Stables of the great Barbaro and no doubt she will be with the early pacesetters. She has found the Grade 1 waters too deep in her last two races, but won a Grade 2 and three in her prior two starts with 100 and 102 BSFs. She will be challenged early in here and will then have to hold off the talented closers. They’ll Have to Catch Her

Miss Julia Star (Fr) [ML 20-1 – Drysdale/Hamelin – 12: 4-5-2 - $144,091] This one is making her first North American start on the heels of three straight wins in France, two of those against the boys. That all sounds attractive, along with the 20-1 odds, but those wins came at second-string tracks in France. Her PPs suggest that she likes to run on the lead and that is unlikely here. The Euros don’t come out of the gate very quickly which will put her in a tough spot in this field. Her French rider comes over for the race. First North American Start

Kitten’s Roar [ML 7-2 – Maker/Velazquez – 19:7-7-2 - $835,268] This Ramsey-owned daughter of Kitten’s Joy is the leading money winner in the field due to her last three races, which included the Goldikova and a place in the EP Taylor (G1). That recent win at Del Mar makes her a serious challenger for Cambodia. She is clearly in the best form of her career, but has been doing a lot of travelling around the country without a break since August. Can she keep it going in here? She won her last from the 14 post-position getting the lead at the top of the stretch. Worthy Competitor for the Top One

Summary: You are going to need a good, clean trip to beat this very nice field of 12. Cambodia and Kitten’s Roar are a very worthy top two in the Matriarch, but the Chad Brown duo should not be taken lightly. Is it possible out of the top contenders that Off Limits may be the one that gets ignored? If so, I will key her in some exactas.