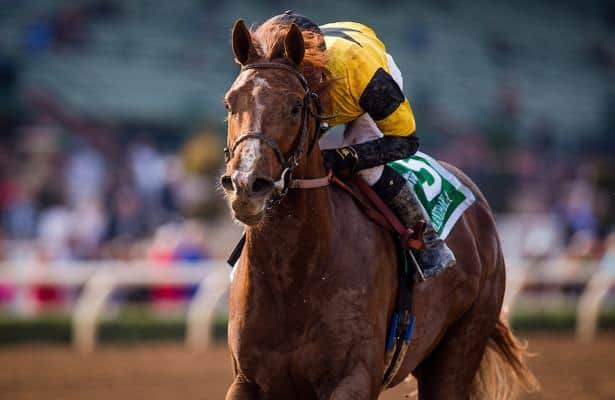 The $300,000 Malibu Stakes, which is the final Grade 1 of the year on the dirt restricted to 3-year-olds, has attracted a rather remarkable overflow field of 16 as the feature race on opening Wednesday at Santa Anita Park.

In all, there are seven graded stakes winners in the field, including previous Grade 1 hero McKinzie. They made their most recent starts at seven different race tracks across the country. Three of them last ran in the Breeders’ Cup.

The seven-furlong sprint is slated as race 9 out of 10 with approximate post time scheduled for 6:30 p.m. ET. Here is a look at the field with projected morning line odds by Horse Racing Nation:

Calexman [ML 50-1 – Midshipman – V. Cerin/G. Franco – 13: 3-2-3 - $171,233] Calexman is a versatile sort with wins on both the turf and the dirt. Most recently he shows an allowance win at Del Mar on the main track. He is graded stakes-placed on the grass and prefers to run on the front end. Breaking from the rail, jockey Geovanni Franco will have to hustle his mount out of the gate. This guy is up against it in this deep field. Pretender.

Majestic Dunhill [ML 30-1 – Majesticperfection – G. Weaver/M. Franco – 10: 4-1-2 - $215,724] This George Weaver trainee made his initial start on the dirt a winning one when he took down a listed stakes race at Laurel going seven furlongs with a rally from last place. He is in excellent form and worked locally for the Malibu. Live longshot.

Copper Bullet [ML 4-1 – More Than Ready – S. Asmussen/J.Ortiz – 5: 3-2-0 - $227,000] Copper Bullet flashed his talent early in his juvenile season when he broke his maiden at Churchill Downs in May by eight-lengths. Since then, he was second in the Bashford Manor (G3) and won the Saratoga Special (G2) going away. It took 15 months to get him back to the races after that score due to shin issues. Copper Bullet handled a solid field of allowance horses in his November return under the Twin Spires. He has been training at Santa Anita since the beginning of this month. We’ll find out just how good he is against this formidable field. Contender.

Still Having Fun [ML 20-1 – Old Fashioned – T. Keefe/K. Desormeaux – 12: 4-2-1 - $480,653] He burst on the scene when he upset the Woody Stephens (G2) at Belmont Park at 13-1. In there, he beat the likes of Engage and Promises Fulfilled, but he has not had a win since that big victory back on the Belmont Stakes undercard. He is certainly a threat if he can recapture that magic, but recent form would seem to say that that is unlikely. Toss.

Identity Politics [ML 50-1 – Into Mischief – C. Brown/I.Ortiz Jr. – 4: 1-2-1 - $81,450] This late-developing Chad Brown runner was an impressive maiden winner at Belmont Park in October in a seven-furlong race taken off the turf. Subsequently, he was second in an allowance race. Making his stakes debut in a Grade 1 of this caliber is certainly a tall order, even for this barn. Maybe there was room on the flight out West. Pretender.

Axelrod [ML 6-1 – Warrior’s Reward – M. McCarthy/J. Velazquez – 11: 4-2-1 - $732,925] Axelrod is certainly a well-travelled veteran among these sophomores with 11 starts at five different tracks and at distances ranging from 6 ½ furlongs to a mile and a quarter. He cuts back in distance after running ninth in the Breeders’ Cup Classic. Not sure what to expect from this talented runner, but he certainly cannot be disregarded. Contender.

Seven Trumpets [ML 12-1 – Morning Line – D. Romans/R. Albarado – 12: 3-3-1 - $400,600] Since returning to one-turn races, Seven Trumpets hit the board in three graded stakes races chasing the likes of Firenze Fire and Promises Fulfilled, but he has yet to break through with that big victory. I think seven furlongs may be his best distance, but it is hard to expect that big win to come in his first trip to California. I do expect him to make a big run down the stretch. Use underneath.

Nero [ML 10-1 – Pioneerof the Nile – B. Baffert/J. Talamo – 4: 2-2-0 - $116,800] This lightly raced Baffert runner was off for nine months until a recent allowance victory at Del Mar. He did create some buzz as a 2-year-old when he finished second in the San Vicente (G2), but that was the final race of his juvenile campaign. He’s never faced a field like this and to do it off one race is asking a lot. Toss.

Ax Man [ML 15-1 – Misremembered – B. Baffert/D. Van Dyke – 6: 3-0-2 - $165,900] He debuted as a 3-year-old on New Year’s Day and created a buzz with his nine-length victory. When he ran fourth in the San Vicente, thoughts about the Derby trail came to an end. His last win came on the Preakness undercard in the Sir Barton. Since then he has two third-place finishes in the Grade 3 Matt Winn and the Los Al Derby, which came back in July. Now a gelding, Ax Man tackles this Grade 1 following a five-month layoff. However, Baffert is quite good at having horses ready to run off of works alone.

“He’s doing really well,” Baffert said. “We cut (gelded) him. He had a meltdown at Churchill Downs (for the Matt Winn last June), so we gave him some time off and he’s been working exceptionally well.” Board hitter.

Bobby’s Wicked One [ML 50-1 – Speightstown – A. Stall Jr./T. Gaffalione – 6: 1-3-1 - $108,080] Based at the Fair Grounds barn of Al Stall Jr., he has only a debut maiden victory to his name. However, he also shows two in-the-money finishes in stakes races. His six career starts are well spaced over the past year. He is another one facing a significant class bump. Pretender.

Greyvitos [ML 30-1 – Malibu Moon – A. Kitchingman/E. Roman – 7: 2-0-1 - $320,465] We remember this son of Malibu Moon from his splash on the Kentucky Derby trail when he broke his maiden in the Bob Hope Stakes (G3) and then backed in up with a win in the Springboard Mile as a 2-year-old. He had problems after that race and tried to sneak into the Derby in the Lexington (G3). He ran a disappointing sixth in an allowance at Del Mar a few weeks ago after a seven month layoff. Toss.

Kanthaka [ML 6-1 – Jimmy Creed – J. Hollendorfer/F. Prat – 6: 3-0-1 - $263,663] Kanthaka has been training smartly for his return to the races having been away since May when he won the Laz Barrera (G3) at Santa Anita after a brief foray on the Kentucky Derby trail. At this point, Kanthaka is a seven-furlong specialist with a perfect record at the distance. In addition to the Barrera, he broke his maiden and took the San Vicente (G2) at seven panels. His strong closing move is ideal for the distance. Top choice.

McKinzie [ML 2-1 – Street Sense – B. Baffert/M. Smith – 6: 4-1-0 - $906,000] At this point McKinzie has to be described as lightly raced with only six career starts as his 3-year-old season comes to close in this race. He returned from a six-month layoff with a stellar performance to win the Pennsylvania Derby (G1). But then, his 12th-place finish in the Breeders’ Cup Classic is hard to explain. The race began well, but he just had no run in the late stages of that race. He gets class relief returning to restricted company. He is the class of the field and. On his best day, he should be the winner.

“He’s doing really well,” Baffert said. “I freshened him up a little after the Breeders’ Cup, and in retrospect, he wasn’t ready to go a mile and a quarter...but I thought I had him back. The Breeders’ Cup took me out of my normal program. It’s a lot of money and it seemed right, but he just didn’t show up. I like the way he’s training here for seven-eighths.” Likely winner.

Solomini [ML 6-1 – Curlin – B. Baffert/J. Rosario – 8: 1-3-3 - $764,000] For a while, Solomini was near the top of many Top 10 lists for this year’s Kentucky Derby, especially after his second-place finish in the Breeders’ Cup Juvenile. But winning has proven to be an issue for the son of Curlin who piled up seconds and thirds on the Derby trail. Tenth in the Run for the Roses, he has been off since running third in the Affirmed (G3) at Santa Anita in June.

“Solomini is coming off a layoff and has been freshened up,” said Baffert. “He’s an off-the-pace sort. I’d prefer running him in a little allowance race, but the Malibu is a Grade I, and when you have horses with their breeding, you have to take a shot.” Use underneath

Super Sol [AE #1 – Awesome Again – B. Baffert/B. Hernandez Jr. – 4: 2-0-1 - $71,480] The fifth Baffert entry got crushed in the Cherokee Run by Audible and others on the Breeders’ Cup undercard. That was after a maiden win and then an allowance victory. He’ll face the big boys again here if he draws into the field. Pretender.

Cool Bobby [AE #2 – Shanghai Bobby – P. Eurton/R. Bejarano – 5: 1-1-1 - $59,640] He is a lightly raced son of Shanghai Bobby who has only a maiden victory in his past performances. Although he has never run a bad race, he has not shown much punch at the end of his recent races. Toss.

Summary: In analyzing this race, a big question comes to mind. Is this a prep race or the prize? For most of the field, the restricted conditions give them one last chance to get a Grade 1 victory without facing older horses. However, for others like Solomini and McKinzie, maybe Baffert has longer, more important races in mind in 2019.

Either way, these seven-furlong contests match up one-turn sprinters with two-turn runners making a cutback in distance.

This is a very deep and strong field. Each of Kanthaka, McKinzie and Solomini -- three of the most likely contenders -- were not helped by drawing the far outside post-positions.

It sure feels like a race where you have to play against the likely favorites from the Baffert barn. Thus, horses that look like better prices to play are: Majestic Dunhill, Copper Bullet and Kanthaka.