Madefromlucky Stars in the Peter Pan 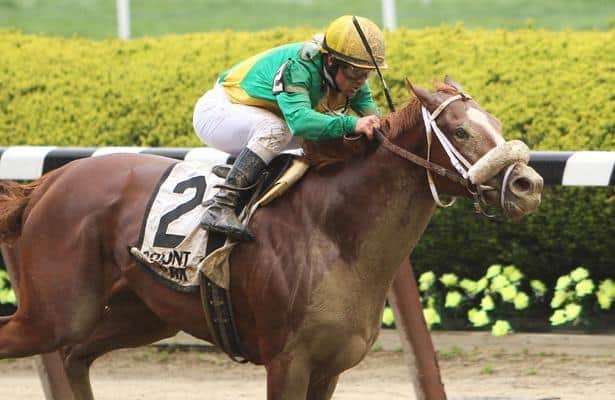 Madefromlucky got a perfect ride from jockey Javier Castellano to sweep by the early leaders and win the $200,000 Peter Pan (G2) at Belmont Park. The Peter Pan is the traditional prep race for the Belmont Stakes for horses that skipped the Kentucky Derby. With the victory, Madefromlucky now has a chance to emulate Tonalist 2014, AP Indy 1992, and Coastal 1979, all who went on to win the Belmont Stakes after scoring victory in the Peter Pan.

Madefromlucky came into the Peter Pan with the most experience, the most earnings, and the most Kentucky Derby qualifying points (30), yet he was sent of as the 9-2 third betting choice in the field of five. His Todd Pletcher stablemate, Two Weeks Off, was sent off as the 4-5 favorite, casting Madefromlucky in the always dangerous roll as “the other Pletcher”. Before the race, jockey John Velazquez opted to ride the favorite leaving Castellano the mount on the winner.

At the start, Two Weeks Off came out of the gate a bit slowly then stumbled a few steps causing Velasquez to rush his horse into contention. In the meantime, Wolf Man Rocket was put on the lead on the rail by Irad Ortiz. After a half mile, Two Weeks Off had the lead while running between Wolf Man Rocket and Tiz Shea D. All the while, Castellano had Madefromlucky relaxed in fourth place on the outside.

The pace was brisk with the first six furlongs going in 1:10.33. Tiz Shea D was not going to be a factor at the end as Wolf Man Rocket and Two Weeks Off battled around the wide sweeping Belmont Park turn. As the early pace battle took a toll on the leaders, Castellano made his move with Madefromlucky and they easily surged to the lead, covering the final furlong in :12.97. Conquest Curlinate was also able to make a closing move to get up for second. Two Weeks Off held on for third place money, and the early leader Wolf Man Rocket ended up fifth and last.

Castellano was happy with his horse after the race, "I had a beautiful trip behind the speed horses; there was a good pace in the race. My horse settled beautifully off the pace and turning for home I had a clear trip. He did it the right way, switching leads at the right time and finished well.”