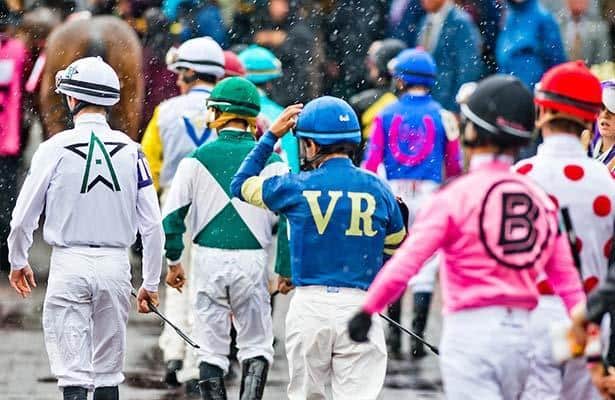 When you look at the career record of the jockeys in the 2020 Kentucky Derby, you have to keep in mind the race happens just once a year and includes the largest field of any in America. Therefore, most riders’ Derby stats are going to look very poor in comparison to their regular record or to their Breeders’ Cup performance.

Hall of Famer Mike Smith is the perfect example. His Breeders’ Cup stats [145: 26-16-8] are fantastic, but his Derby record [25: 2-4-1] pales in comparison. Javier Castellano, another Hall of Famer, has never won the Run for the Roses, but sports 12 victories in the World Championships.

This year, all but Smith and John Velazquez [21: 2-2-0] are seeking a first Kentucky Derby win. It might be easier as only three regular New York riders are making the trip to Churchill Downs. Superstar jockeys like the Ortiz brothers, Irad and Jose, and Joel Rosario are staying at Saratoga because of Covid-19 travel restrictions.

There are 17 jockeys who have won two Kentucky Derbys. Ron Turcotte and Eddie Delahoussaye did it in consecutive years. Turcotte had his Meadow Stable double with Riva Ridge in 1972 and Secretariat in the following year. Delahoussaye had Gato Del Sol in 1982 and then Sunny’s Halo.

Mike Smith [Honor A. P. - 25: 2-4-1] – Smith won his first Derby in 2005 when Giacomo pulled his stunning 50-1 upset and he reunites with trainer John Shirreffs this year. In 2018, Justify brought Smith his second win in the Run for the Roses. He just missed a third victory when favorite Bodemeister got caught near the wire in 2012. Smith also rode the favorite in 1993 with Prairie Bayou, 1994 on Holy Bull, and on Unbridled’s Song in 1996.

John Velazquez [Authentic – 21: 2-2-0] – Johnny V. won the Derby in 2011 with Animal Kingdom when he inherited the mount at the last minute from Robby Albarado. Then in 2017, the favorite Always Dreaming gave Velazquez his other victory in the Derby. He has a pair of second-place finishes in 2001 with Invisible Ink and Code of Honor last year.

A victory by Smith or Velazquez would move them into the elite group of seven riders with three wins in the Derby that includes Victor Espinoza, Angel Cordero Jr., Gary Stevens, Kent Desormeaux, Calvin Borel, Earle Sande and Isaac Murphy.

SEEKING A FIRST
With the difficult travel restrictions from the jockey colonies in New York and California, many Kentucky based riders will get a rare chance to ride in the Run for the Roses.

Manny Franco [Tiz the Law – 2: 0-0-0] will be on the biggest favorite in recent history this year with two uncompetitive mounts in his prior two starts.

Tyler Gaffalione [South Bend – 2: 0-0-0] left Saratoga where he was having a very good meeting to head to Kentucky for his third try in the Derby. His best finish came last year when he was seventh on War of Will.

Julien Leparoux [Storm the Court – 11: 0-0-0] – Leparoux was fourth in 2017 with Classic Empire in addition to a pair of fifth place finishes.

Joe Talamo [Attachment Rate – 2: 0-0-0] gets up on a horse that has a bit of a buzz around him this year after two finishes at the back of the field.

Don’t be upset if your Derby horse is ridden by a rookie — 27 jockeys won the race in their first try. The most recent rookie winners were Mario Gutierrez in 2012 on I’ll Have Another and Stewart Elliot, who rode Smarty Jones in 2004. Steve Cauthen began his 1978 Triple Crown with his rookie Derby win on Affirmed.