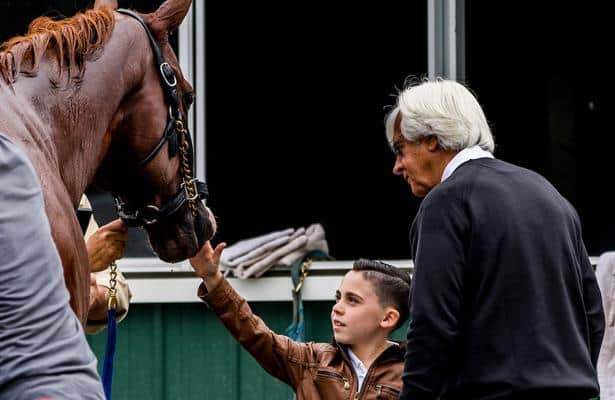 With his victory in the 2018 Belmont Stakes, Justify became the 13th Triple Crown winner and, at the same time, Hall of Fame trainer Bob Baffert moved out of a tie with D. Wayne Lukas at 14 total wins in the Kentucky Derby, Preakness Stakes and Belmont with victory number 15.

For Justify, it all happened in a just shy of four months and in only six career races. For Baffert, it began some 21 years ago, in 1997, when he won the Kentucky Derby with Silver Charm. Justify has won a Maiden Special Weight, an allowance, the Santa Anita Derby, and now the three jewels of American thoroughbred racing. The superstar trainer now has won five Kentucky Derbys, seven editions of the Preakness and, finally, three Belmonts. In addition, Baffert has hit the board in the Triple Crown races 11 other times.

Justify and Seattle Slew are now the only unbeaten Triple Crown winners. In 1977, Seattle Slew was 9-for-9 after the Belmont, including three races as a 2-year-old. At the same time, Baffert became only the second trainer in history to win the Triple Crown twice along with the legendary Belair Stables conditioner “Sunny Jim” Fitzsimmons.

When WinStar Farm's President and CEO, Elliott Walden, was asked why he sent Justify to Baffert, he replied simply and yet profoundly.

"We tried to hire a very good trainer," Walden said. "Bob is maybe the greatest of all time.”