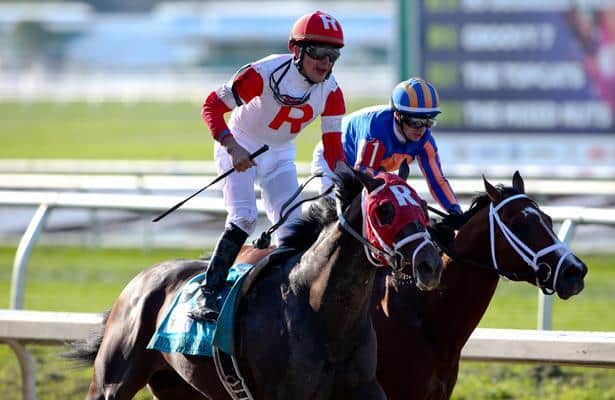 Six months ago, International Star was headed to the Kentucky Derby after making the field with 171 qualifying points, more than Dortmund, more than Frosted, and more than the Derby favorite, American Pharoah. The Ken and Sarah Ramsey runner drew post position one, and had been assigned morning line odds of 20-1.

International Star had accumulated the points after sweeping the three Derby prep races at Fair Grounds Race Course. First the LeComte (G3), then the Risen Star (G2), and finally the Louisiana Derby (G2), each win was better than the one before it. His Beyer Speed Figures for those three races showed the progression, going from 89 to 92 and finally to 96 for the Louisiana Derby.

The son of the Kentucky Derby winner, Fusaichi Pegasus was headed to the Run for the Roses on a winning streak of three graded stakes, but he never got the chance to test his mettle against the rest of the three-year-olds in the Triple Crown.

On the morning of the Derby, International Star was declared out of the race when heat was discovered in his left-front hoof. Then a few days later, a very tiny bone chip was discovered in that same foot and that surgery would be required. Trainer Mike Maker hoped that he would be ready to return in the fall. In mid-October International Star got back to training at Churchill Downs and he will make his return to the races on Thanksgiving Eve Day in the $200,000 Zia Park Derby.

With 2015 winding down, the six figure purse and a field restricted to three-year-olds seems like an ideal spot for Maker to bring International Star back to the races, even if it does require a trip to New Mexico. A field of nine has been assembled for the mile and a sixteenth Zia Park Derby, which is carded as race seven on Wednesday with a post time of 4:51pm ET.

Although International Star [ML 5/2] is by far the most accomplished horse in the field, it will not be easy for the millionaire to get a win after the eight month layoff. The competition includes Mobile Bay [ML 3-1], the winner of the Sept. 12 Super Derby (G2) at Louisiana Downs. Bold Conquest [ML 9-2], who is a multiple graded stakes placed son of Curlin from the barn of Steve Asmussen, won an October allowance at Keeneland as his second race off a brief layoff. While on the Kentucky Derby trail, Bold Conquest was third in the Rebel (G2) behind American Pharoah. Pain and Misery [ML 6-1], who is unbeaten in three tries at the New Mexico track, will try and get an edge with the home course advantage.

There will be a rider change as regular jockey Miguel Mena is off and instead, Martin Garcia will get the mount. International Star will try and do what Dortmund has done recently and get back near the top of the three-year-old rankings.