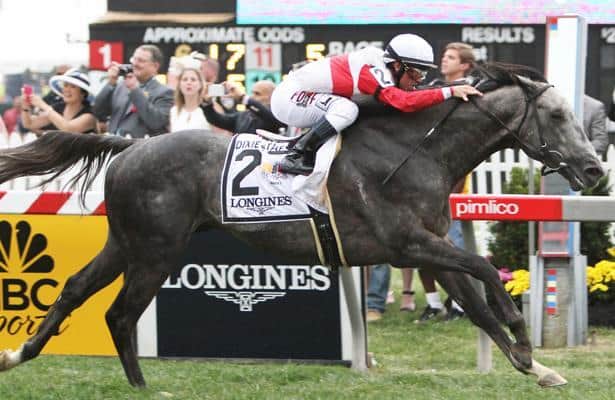 Put your past performances away and stop spending hours handicapping the big races because jockey Javier Castellano has made the business of picking winners easy -- just bet on Javier. Castellano rode Ironicus to victory in the Dixie (G2) giving the rider his fourth stakes win during Preakness weekend.

Apparently the betting public has adopted the new Castellano wagering system as Ironicus was bet down to 7-1 from his morning line odds of 15-1. At 7-1 Ironicus appeared to be an underlay, this son of Distorted Humor had only two wins with his best coming in a first level allowance at Gulfstream Park in January. The Stuart Janney owned four-year-old had never run in stakes race let alone a grade two event like the Dixie.

With the late scratch of Grand Tito from post position one, Ironicus essentially had inner most post position in the field of 13. As usual Ironicus broke slowly and Castellano allowed his horse to settle into his stride and they began a ground saving trip near the back of the pack.

The pace setters carved out moderate fractions of :23.69 and :48.14 for the first half mile, but the pace picked up from there. After six furlongs in 1:11.95 the field began to pack together with now five horses strung across the track near the lead. Cage Fighter had managed to make a move up the rail to get into contention and Castellano, who had still been saving ground with Ironicus, decided to follow Cage Fighter.

Cage Fighter surged to the lead with Ironicus close behind. Castellano made another perfect decision and quickly shifted Ironicus one path outward so that he could make his move to the outside of the leader. From there Castellano urged Ironicus quickly and easily to the front.

After the race, Castellano commented, “This race set up perfectly for us. In his last race the leader just galloped and he made a run but didn’t have a chance to win. The turf was also softer that day. He likes a little harder track and with today’s fast pace, it was exactly what we needed. I think he may be able to step up.”

This victory gave both the jockey and trainer Shug McGaughey their third win in the Dixie. Castellano had won previously in 2012 on Hudson Steele and 2008 with Pays to Dream and McGaughey in 2009 with Parading and in 1993 with Lure.