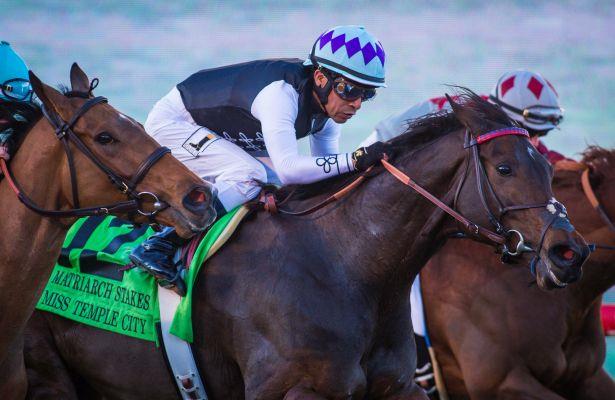 The October 7 edition of the Cross-Country Pick 4 teams up Belmont Park and Keeneland for an All-Stakes, All-Grade One, and All-‘Win and You’re In’ sequence. The multi-race bet starts with the two-year-olds, first the Champagne in New York followed by the Breeders' Futurity at Keeneland, then the Jockey Club Gold Cup at Belmont, and finally the Shadwell Turf Mile from Kentucky.

This Pick 4 is being hosted by Keeneland, so the takeout rate will be 22%. The wager will be listed as Belmont-Keeneland Pick 4 when using a betting machine at the track or in an ADW account. Post time for the sequence is scheduled for 4:13pm ET.

Three very big fields and a challenging group of seven in the Jockey Club make this one of the tougher versions of the Cross-Country Pick 4. Let’s drive right in and see what we can come up with.

Leg 1 - Champagne - Belmont race 8 - 4:13pm ET – Not only are all four of the races Breeders’ Cup WAYI qualifiers, but the two-year-old races also carry Road to the Kentucky Derby points to the top four finishers (10-4-2-1).

A full field of twelve juveniles has been assembled for the Champagne. The majority of the field has only a maiden victory to their credit except for two horses that are still maidens, and three that also have a stakes win of some type.

Kowboy Karma (#1) is homebred gelding that is owned, bred, and trained by Larry Jones. This son of Kodiak Kowboy won his first two races at Delaware Park, including the overnight Strike Your Colors. Going two turns in the Sapling, he made a big closing move to finish second. He can get the distance and the rallying style could serve him well. The always unpredictable Eric Guillot brings Stronger (#3) to Belmont Park after a six-length maiden win going a one-turn mile at Gulfstream Park. He had a bullet work at Belmont the other day. Enticed (#4) is my top choice. This Godolphin homebred had an impressive maiden victory in the mud at Saratoga closing weekend. He did not like the muddy kickback while racing on the rail, but once he got clear in the middle of track, he mowed down the leaders. His dam is the $1.6 million earner It’s Tricky, who was also trained by Kiaran McLaughlin to win the CCA Oaks and Ogden Phipps, so the mile distance should not be an issue for Enticed. Enticed is also entered at Keeneland, but he will not run there after drawing the 13 post. Aveenu Malcainu (#8) has dominated two starts against New York-breds and now tries open company. Both wins got good speed figures and he might have a chance in this field. Firenze Fire (#12) is the only graded stakes winner in the group. He defeated Free Drop Billy (see Breeders’ Futurity analysis) to take the Saratoga Special, but then ran a disappointing fourth in the Hopeful. He probably deserves another chance.

Leg 2 - Breeders' Futurity – Keeneland race 8 - 5:10pm ET – Another big field of babies with 13 entered to go in this two-turn mile and a sixteenth. This race should have a strong early pace with six horses that appear to like to be on or pressing the early going. Thus, I will focus more on the horses that will rally from behind.

My top choice is Free Drop Billy (#9). The Dale Romans trainee will definitely appreciate the two turns and the extra distance. He ran a big race to finish second by a neck in the Hopeful after going very wide on the turn and rallying from last. Givemeaminit (#7) is still a maiden, but ran a very good closing race to get third in the Hopeful just a head behind Free Drop Billy. Captivating Moon (#11) won his maiden on the turf at Arlington Park and then was second on the synthetic surface in the Arlington-Washington Futurity. In both of those races, he had impressive rallies from behind.

Leg 3 - Jockey Club Gold Cup – Belmont race 10 - 5:23pm ET – Although there are only seven horses in the JCGC, it is hard to feel overly confident about any of them. You can click on the link above to access my full preview of the race.

Keen Ice (#7) has a big class edge over most of this field. He has been running in graded stakes company his entire career and is doing well since moving to the Todd Pletcher barn. He finished third in last year’s Breeders’ Cup Classic and has run very well in his last two starts. Ultimately though, Keen Ice has only won three times. Pavel (#4) is a three-year-old with only three career starts who was very impressive in winning the Smarty Jones at Parx in his last start. The ten furlongs is a lot to ask so soon, but there are experts that think this Doug O’Neill runner has a bright future. The distance will not be an issue for Destin (#6). His big question is whether he can return to the form that got him to within a nose of victory in the Belmont Stakes last year. If so, he will be very dangerous here. Diversify (#1) has been running fast against New York-breds. Last race was a big front running winner going nine furlongs. He’ll be on the lead in this one, but how far can he carry his speed?

Leg 4 - Shadwell Turf Mile – Keeneland race 9 - 5:45pm ET – Fourteen are entered in the Shadwell, which is a very competitive race. Suedois (#3) has been a contender in group stakes in Europe. He has run well on firm turf and may like our harder surfaces. First-time Lasix is noteworthy for this six-year who has only one win the last two years. The last two races from Ballagh Rocks (#4) were very good with both on yielding tracks, when his best surface is firm. The mile is his best distance, also. Miss Temple City (#8) tries to win the Shadwell for the second year in a row. She will have to step it a bit because her races this year are a notch below last year when she was beating the boys. Heart to Heart (#10) rarely runs a bad race and he has a great record going the mile. He goes to the lead and runs fast and has a chance of wiring this field. If you draw line through the last two races of American Patriot (#14), first because of a yielding track and then because it was Royal Ascot, he’s beating Heart to Heart in the Makers Mile at Keeneland. He’ll be running late.

TICKETS – I’ll make two tickets and each one will have a single in a two-year-old race, so it will be possible to cash both tickets, but only if both of those singles win.