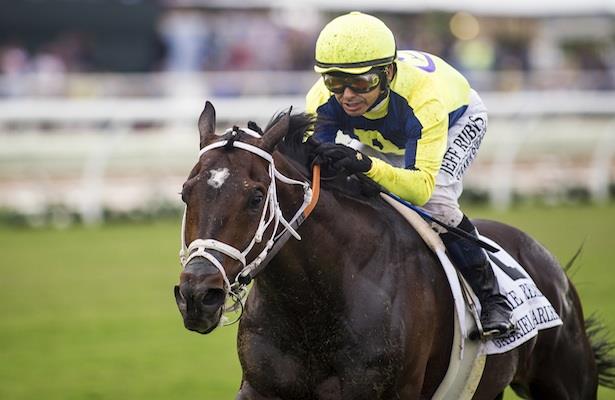 The day at Del Mar began with heavy rains and a lightning storm, both very unusual during the summer racing meet at the San Diego beach town. The main track was turned sloppy for the first time since 1991 and the turf course for the Eddie Read (G1) was labeled YIELDING, which was another unusual and rare condition for Del Mar. Most of the field of seven had no experience running on anything but a FAST turf course, but it was Gabriel Charles that relished the wet going as he recorded his first victory since September of 2013 when he won the Del Mar Derby (G2) as a three-year-old. For the Jeff Mullins trainee this was his third start after nearly a year and a half layoff, following a bowed tendon.

Hall of Fame rider Mike Smith was reunited with Gabriel Charles for the first time since the horse’s comeback began. It was Smith who had ridden him in that Del Mar Derby victory in 2013. The win gave Smith back-to-back victories in the Eddie Read having won in 2014 on Tom’s Tribute.

The race began as expected with Big Cazanova going to the early lead and the 6-5 betting favorite Midnight Storm sitting just behind the pace setter. Big Cazanova held the lead for the first half-mile that went in 23.43 and 47.26. After three-quarters in a quick 1:11.04, Midnight Storm had headed the early leader. All the while Smith was content to sit in sixth position with only Finnegans Wake behind them.

Entering the clubhouse turn the leaders began to fade and Gabriel Charles was asked to make an outside run by Smith. The son of Street Hero responded, easily passed the field, and by mid-stretch was in command and in front. The winner ran the final quarter mile in 24.18 and widened his advantage to finish 3 ¾ lengths in front of Twentytwentyvision. Finnegans Wake was also able to rally from last place and he managed to get the third place money.

“I don’t think it rained on the turf course; only the main track,” joked Smith. “It was plenty fast. My horse was so nice and comfortable; going along so easy. I was watching the competition up front, but I thought I could handle them. I was worried about that one in the back (Finnegans Wake). I knew he was going to be coming and he’s run some big ones. On the turn I gunned him (Gabriel Charles) to put a little distance between myself and the rest. I guess I sure did. He was impressive.”

Trainer Jeff Mullins was proud of the comeback from his runner, “How many horses bow a tendon and come back and win a Group I? We took our time with him and that was the key. We knew he had this caliber of talent, it was a matter of keeping him healthy. We were worried about the turf course after the rain but Mike (Smith) said the course was great.”