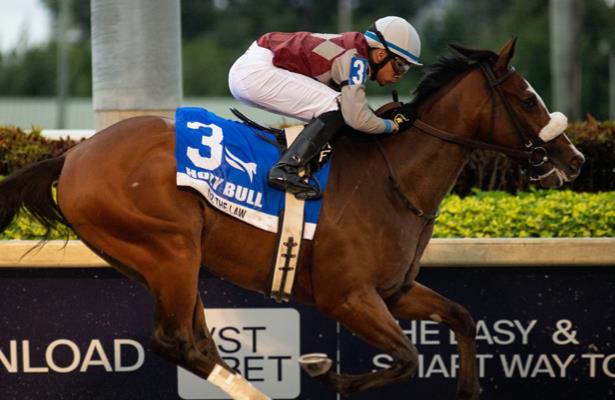 The COVID-19 pandemic caused the 2020 Kentucky Derby to be delayed by four months. When the Derby date changed to the first Saturday in September, the Kentucky Derby Future Wager was expanded to include three additional advanced wagering opportunities.

Kentucky Derby Future Wager #5 opened on Friday and will be available for betting until 6:00 pm ET Sunday, June 28. On Saturday, the Ohio Derby (G3) was run and included Kentucky Derby qualifying points for the first time. But the longshot winner, Dean Martini, is currently not nominated for the Run for the Roses.

With 69 days left until Sept. 5, Tiz the Law and Honor A. P. sit on top of most Kentucky Derby contender lists as the two favorites. They lead the Derby point standings with secure spots in the Derby field.

As of Sunday morning, $135,218 was bet in the win pool for Kentucky Derby Future Wager pool #5. Here is a look at the horses that have attracted the most action in KDFW pool #5 thus far.

Tiz the Law [9-5] is the overwhelming favorite after his impressive victory in the Belmont Stakes, which makes him the only 3-year-old with a chance to win the 2020 version of the Triple Crown. Trainer Barclay Tagg and owners Sackatoga Stable have targeted the Travers on Aug. 8 at Saratoga for their New York-bred’s next start. The Midsummer Derby corresponds to KDFW#7, which will be offered Aug. 7-9.

Honor A. P. [5-1] got his first stakes victory when he won the Santa Anita Derby (G1) on June 6 while defeating Authentic. Trainer John Shirreffs has not announced his plans for this son of Honor Code, but he is likely to stay in California.

All Others 3-Year-Old Males [10-1] is the third choice by a very narrow margin. A wager on this mutuel field includes all of the 3-year-old males except the 22 individual horses listed in pool #5. It is interesting that #1 through #22 include eight horses that each currently have 0 qualifying points to the get in the Derby starting gate and eight have not even won a stakes race.

Authentic [10-1] was undefeated until he ran second behind Honor A. P. in the Santa Anita Derby. Trainer Bob Baffert has the son of Into Mischief nominated for the Haskell Invitational at Monmouth Park on July 18. Baffert has won the Jersey Shore race a record eight times, all coming since 2001. Authentic currently sits in third on the Derby points list. The Haskell anchors KDFW pool #6, which will run July 17-19.

Dr Post [18-1] currently sits in eighth in Derby points after his second-place finish in the Belmont Stakes. The late developing Todd Pletcher trainee is owned by Vinnie Viola’s St. Elias Stable. Viola was a part owner of Pletcher’s second Kentucky Derby winner, Always Dreaming. Pletcher is considering the Haskell or the Travers for his next start.

With this information in mind, here are four keys to playing KDFW #5, considering that the goal of a future wager should always be to find some value.

1) Don’t bet the favorites to win. Yes, right now it seems very likely that Tiz the Law or Honor A.P. will win Kentucky Derby 146. However, there is just no value here. In the 20-horse field on Sept. 5, you would get odds very close to what is currently available in this pool. Plus, you wouldn’t have to wait 69 days and you would know their post position. So, don’t bet the favorites now in the win future.

2) Placing a win wager on Authentic in KDFW #5 pool basically is a bet that he will become the latest Bob Baffert runner to win the Haskell Invitational on July 18. Right now, his KDFW odds stand at 10-1 and if he wins at Monmouth Park in less the three weeks his odds are likely to drop in KDFW pool #6. He’ll be the favorite in the Haskell, so if you are a fan of Baffert runners, you might consider a wager today.

3) Stay away from the #24 All Other 3-Year-Old Males. There is a reason that the odds on this betting option are so much higher than in the previous KDFW pools. With just two months or so left until the Derby it is unlikely that any of these unknown horses will qualify for the field -- especially since the field of 22 individual offerings in pool #5 include a bunch of horses at higher odds that have only a maiden victory and/or haven’t won a stakes race.

4) Use Dr Post and Max Player underneath in the exacta with Tiz the Law and Honor A. P. In the Belmont Stakes, the second and third place runners proved that they will be able to handle the Derby distance and they both gained valuable experience in the first leg of the Triple Crown.