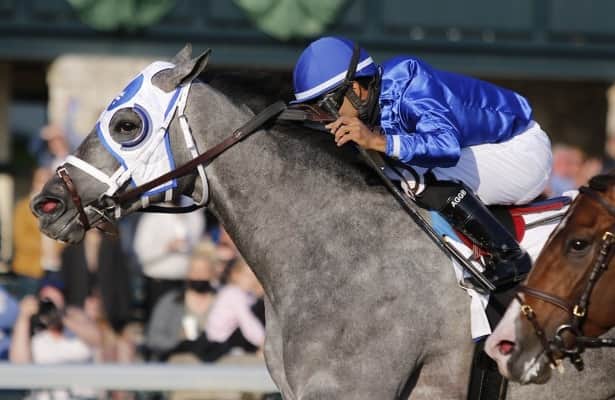 The NTRA top 3-year-old poll made its 2021 debut on Feb. 16 with the juvenile champion Essential Quality in the No. 1 spot with 24 first-place votes. At that time, the Brad Cox trainee had yet to make his first start of the year. In the next eight weeks he increased his career record to a perfect 5-for-5. Thus, Essential Quality has been in the top position in the poll for all nine weeks of the year and garnered 34 of the 37 top votes cast in the current rankings.

Essential Quality was one of only three horses that won two official points races in 2021, along with Life Is Good and Greatest Honour. Going back to September, when the road to the Kentucky Derby began, Essential Quality won four of the races. Those victories also put him on top of the final Kentucky Derby points leaderboard published by Churchill Downs, with 140 points.

To continue with his impressive resume, Essential Quality was the only favorite to win his start in the 100-point prep races with his victory in the Blue Grass (G2) at Keeneland.

While Essential Quality stayed on top in this weekly poll, other contenders have come and gone. Bob Baffert runners held the No. 2 position in the poll for the first eight weeks. Before his surgery-requiring injury, Life Is Good held the second spot for five weeks. Then his stablemate Concert Tour took over that ranking until he was upset in the Arkansas Derby (G1). This week, the John Sadler runner Rock Your World, who won the Santa Anita Derby (G1), claimed the No. 2 ranking.

It is worth noting that the NTRA poll for the top 3-year-olds is not a Kentucky Derby poll. Although those two rankings have significant overlap, horses such as Life Is Good and Greatest Honor still get votes based on races they ran in 2021 even though they will miss the Run for the Roses.

With Essential Quality heading to the first Saturday in May as a clear-cut favorite, the time also came for me to include the best 3-year-old in the overall Top Thoroughbred Poll for the first time. I put him in the No. 5 spot, just behind the powerful pair of older female stars, Monomoy Girl and Swiss Skydiver.

The biggest race of this coming Saturday is the Apple Blossom (G1) at Oaklawn Park with the anticipated meeting of Monomoy Girl, who is ranked at No. 3 with five first-place votes, and No. 4 Swiss Skydiver, with one vote as top thoroughbred.