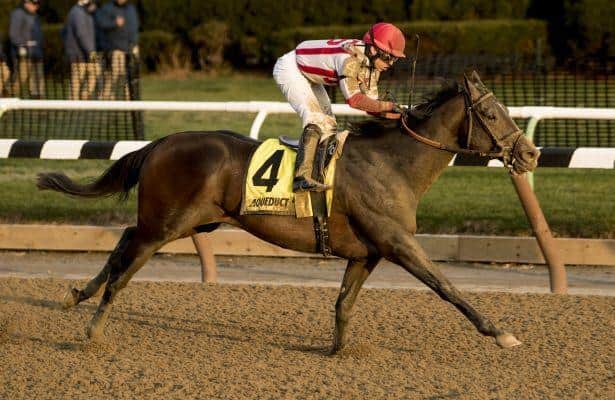 With his rival, and leading 2016 Kentucky Derby candidate Mohaymen, training in Florida, Flexibility easily won the Jerome (G3) at Aqueduct. Contested on the inner track at a mile and 70 yards, this New York-bred son of Bluegrass Cat added 10 more Derby qualifiying points to the four that he had won when finishing second in the Remsen (G2) in November.

The Jerome had a troubled beginning when Donegal Moon, who was in the stall right next to Flexibility, stumbled badly at the start banging into the eventual winner and unseating Manuel Franco. The loose horse was quickly grabbed by the outriders and came out of the race unscathed.

All day the Aqueduct track had been playing very strongly to front runners, while stalkers and closers had no luck gaining on the lead horses. At the start Vorticity, Bird of Trey, and Condo King sought to get that early advantage in the race. All three of the horses had been successful in their previous races but none of them had ever raced around two turns.

Flexibility and rider Irad Ortiz, Jr. were content to settle in fourth place five lengths behind as the three pace setters were within a length of each other. Those three carved out early fractions of 23.48, 47.31, and 1:12.97.

At this point Ortiz was ready to make his move with Flexibility, who was sent off as the overwhelming .55-1 favorite. The Klaravich Stables and William Lawrence owned colt was able to easily take the lead in the clubhouse turn and he drew off to a 4 ¼ length victory.

“He broke very sharp today, I had to take a hold of him to get him back,” explained Ortiz. “I was told they wanted him to rate and save ground. When I asked, he took off and I just wanted him to be able to switch leads in the stretch and finish in the stretch. He did it easy."

Without Mohaymen in the race, Flexibility was able to show his class and learn the lessons that are important for young horses. Chad Brown’s assistant trainer Cherie DeVaux said, "It's very exciting to have him continue to perform well going in these races. It was a very professional effort, sitting behind the speed today and moving on cue. The race set up well for him. He's always been a big, strong colt who did everything correct. Chad [Brown] and the owners will talk about what's next for him. After following Moyhamen [in the Remsen and Nashua] it was a good feeling to see him get his head in front of the other horses."

Of the early leaders only Vorticity was able to get the distance as he finished second. Bird of Prey ended up in fourth and Condo King finished sixth. In Equality, who had shown the ability to close in his maiden victory, picked up third place money.