El Areeb stands out in the Withers 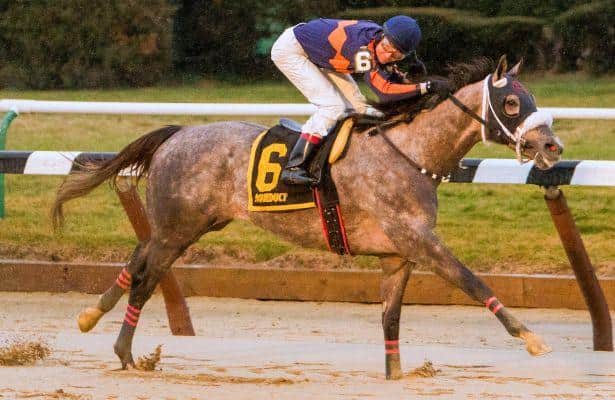 The $250,000 Withers (G3) is the second of four Kentucky Derby 2017 prep races that are run at Aqueduct. El Areeb is returning to New York, from his home base at Laurel, as the favorite to try and back up his win in last month’s Jerome, and in doing so, pick up 10 more Derby qualifying points.

In recent years, the Withers has been an important starting point in the careers of several horses. A few have done well in the Kentucky Derby and the Triple Crown series while others have gone on to have significant impact on racing.

2006 - The Withers was the first stakes win for Bernardini in April of that year and he used the race as a prep for his victory in the Preakness. He would go on to be named the Champion Three-Year-Old of 2006.

2007 – For Divine Park, the Withers was his third consecutive career victory and his first stakes win and he went on to win the Met Mile as a four-year-old. Today he is best known as the sire of Lady Eli.

2012 - Bernardini’s son, Alpha, won the Withers in 2012 before finishing second in the Wood Memorial behind Gemologist. Alpha’s twelfth place finish in the Kentucky Derby was followed by consecutive scores in the Jim Dandy and the Travers.

2013 - The Withers was also the first stakes victory for Revolutionary and he went on the win the Louisiana Derby and finish third in the Derby.

2014 – For Samraat, the Withers was number four in a five race win streak to start his career. Samraat was beaten by Wicked Strong in the Wood Memorial before running fifth in the Derby.

The Withers, which has drawn a field of 10 sophomores, is slated as race eight in a nine-race card with post time scheduled for 4:20pm ET.

True Timber [Calumet Farm – Kiaran McLaughlin – K. Carmouche - 3: 1-0-1 - $52,800] – You have to like the connections of McLaughlin and Calumet for this son of Mineshaft. Last out he was third in the Jerome and will face the top two from that race in here again. Although I think he could better Bonus Point in this rematch, the favorite seems out of his reach. He could pick up a couple more Derby points to go with the two that he earned in the Jerome. Trifecta Contender.

Apartfromthecrowd [Klaravich – Chad Brown – I. Ortiz - 3: 1-0-1 - $46,150] This son of Gio Ponti was a $90,000 yearling purchase who just broke his maiden at Aqueduct on Jan. 14 going two turns. He earned an 81 BSF from that victory, which is the second highest in the field. His first career start was on the turf as Saratoga and his second try came off the grass. Figures have improved with each start and the Aqueduct surface seems to suit him. He has been training all winter in New York. These connections always have to be respected, but tend to get bet heavily. Exacta Contender.

Jaime’s Angel [Youngs Racing – Richard Metivier – A. Garcia - 4: 1-0-0 - $37,568] This New York-bred is by the state’s promising young sire Mission Impazible, but sold for only $15,000 as a yearling. It took four tries for this one to break his maiden in races that were all pretty slow. This is a very big step-up in class. Longshot in Open Company.

El Areeb [MMG Stables – Cathal Lynch – T. McCarthy - 5: 3-1-0 - $184,200] – This son of Exchange Rate is a standout in a field that includes only three other horses with stakes experience. El Areeb is the only stakes winner in the field and he has already won the Jerome (G3) and the JF Lewis at Laurel before that. His recent three consecutive wins have come by margins of 11¼, 5¼, and 8¾ lengths. He is the only horse in the field with a BSF above 90, which he did in his last two starts; just one horse achieved a figure in the 80’s. The Jerome was run at a mile and 70 and the Withers adds another 40 yards to get the mile and a sixteenth. Previously a frontrunner, El Areeb showed the ability to sit off the pace in the Jerome. I expect another stalking trip and another victory for the Cathal Lynch runner. A Standout Here.

Bonus Points [Three Diamonds – Todd Pletcher – M. Franco - 6: 1-2-2 - $116,650] Bonus Points is the most experienced runner in the field with six starts under his girth. Last out on the wet and muddy Aqueduct inner track he was soundly defeated by the favorite and was one length ahead of the third place runner, True Timber.  This Maryland-bred also has a second place in a restricted stake at Laurel. This Todd Pletcher trainee did not get to go to Florida and has been training at Belmont Park. With his worst finish a fourth place in his debut on the grass at Saratoga, another in the money performance seems possible. Very Consistent Performer.

Fillet of Sole [MeB racing Stable – Todd Pletcher – R. Maragh - 4: 1-0-3 - $54,300] Fillet of Sole, needed four starts to break his maiden and then had to travel to Parx to do it. He has not run since that juvenile win going a mile on Nov. 29 when he came from off the pace, which is not easy to do at the Pennsylvania track. He, also, has stayed in New York to train at Belmont. He finished third behind quality horses, Bobby On Fleek and Fact Finding, in his first two maiden tries. His speed figures have improved with every start and he will need to continue that trend if he is to be competitive here. Improvement Possible.

Always a Suspect [Victory Racing – Kiaran McLaughlin – A. Gallardo - 4: 2-1-0 - $85,650] – Three good performances of late while racing off the pace in sprints. Most recently in the Lost in the Fog Stake at Aqueduct, he gave up the lead just before the wire. Those races were not particularly fast and now he stretches out to two turns for the first time. Distance Concerns.

Small Bear [August Dawn Farm – Gary Sciacca – D. Davis - 4: 2-0-1 - $72,932] A gray son of Macho Uno has gotten rolling in his last two starts with a maiden win at Aqueduct and then an allowance victory at Parx going a two-turn mile. Both of those races were very slow and he would need to make a significant step forward to contend in the Withers. Asking A Lot.

Square Shooter [Gold Square – Michael Lerman – F. Pennington - 2: 2-0-0 - $60,600] – This son of Trappe Shot is putting a perfect two for two career record on the line to try a lot of things for the first time. First time in a stakes, first time away from Parx, and first time going two turns could make the Withers a lot to ask. He was well thought of when bought as a juvenile for $185,000 and he hasn’t disappointed. This will be his first start of year and it will be very interesting to see how he handles the step up in class. Interesting Shipper.

J Boys Echo [Albaugh Family – Dale Romans – R. Albarado - 3: 1-1-0 - $94,600] – This expensive yearling purchase of nearly $500,000 is shipping up north from the Gulfstream barn of Dale Romans. He has one Kentucky Derby point already from his fourth place in the Delta Jackpot. He has not run since then, but has been training steadily including a quick 59.60 breeze. Favorite Romans rider, Albarado, is back on board. Expect a late rally from this son of Mineshaft. Top Three Finish Possible.