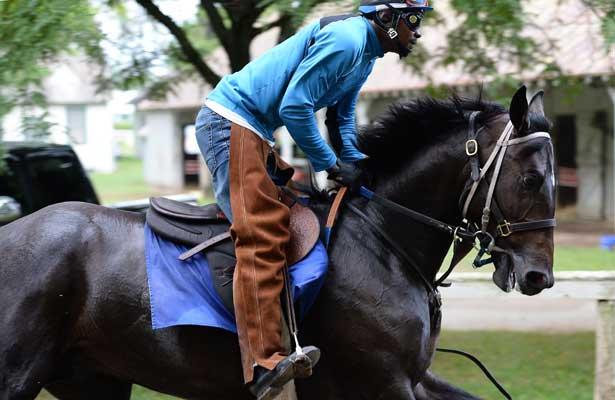 Cozmic One, the first foal of Champion Zenyatta, came home last in his long awaited debut in the second race at Santa Anita, a maiden special weight at a distance of one mile with a purse of $56,000. The son of Bernardini broke slowly from post-position one and dropped back to last much like his mother used to do.

Cozmic One, or “Coz” as he is known around the barn, was part of a field of six horses, all that had previous racing experience on the track at Santa Anita. The John Shirreffs trainee spotted the field an eleven-length advantage down the backstretch. Entering the clubhouse turn track announcer Trevor Denman was hopeful when he called, “Starting to wind up now, Cozmic One is rolling.”

However, heading for home Coz could not maintain a move and finished at the back of the field. The winner Tried And True, a Godolphin home-bred runner for Eoin Harty making his second career start, won the race at odds of 10-1 in a time of 1:37.04 for the mile.

Posters of Cozmic One as a foal with Zenyatta were given to the first 1,000 people at Santa Anita. It also seemed like many people purchased souvenir betting tickets because Coz was 1-9 in the win pool when wagering opened even though he was a distant second in the first race Daily Double pool. By post time Cozmic One was the second choice at 9/5.

Cozmic One received special permission from the Santa Anita stewards to go to the paddock already under tack with an exercise rider in the saddle as Shirreffs walked him to the track.

Over the years Shirreffs has had a stellar record with his first time starters. According to a tweet from @DRFFormulator, “John Shirreffs has had six horses debut at odds of 5-2 or lower in the past five years. Four of them won, including Zenyatta’s sister Eblouissante at 7-5.”

Shirreffs reported that his barn will be shipping back to Belmont Park in May where Coz began his racetrack training, so his next start will likely be in New York.