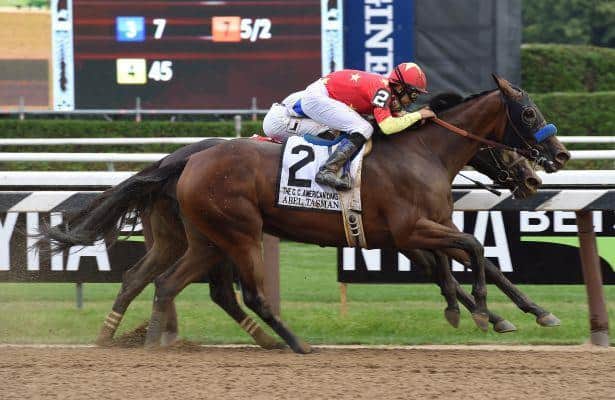 The $1,000,000 Cotillion (G1) has had a long history of producing Three-Year-Old Champions and with Abel Tasman as the headliner of the 2017 edition, that could very well continue this year. A victory at Parx Racing on Saturday would be the Bob Baffert trainee’s fourth grade one win in a row and would virtually lock up the Eclipse Award for her.

If that scenario plays out, then the Quality Road filly would become the seventh Cotillion winner to become a Champion. From the early days when the race was run at Liberty Bell Park, there have been great fillies like Shuvee and Susan’s Girl, and then Revidere at the formerly named Keystone Racetrack to the current century at Philadelphia Park, now Parx, and the stars Ashado, Havre de Grace, and Untapable.

The leaders of the Cotillion, which was first run in 1969, all have three wins. Mike Smith has the most wins for a jockey, including last year with Songbird. Todd Pletcher leads all trainers, most recently with India in 2006, but also with Ashado. Rick Porter, and his Fox Hill Farm, is the winningest owner with, of course, Songbird and Havre de Grace, and the other being Jostle.

A large field of twelve fillies has been assembled for this year’s Cotillion, which is carded as race 10 with post-time scheduled for 4:55pm ET, just before the Pennsylvania Derby.

Thristforthecup [PP 6 - ML 12-1 - Stay Thirsty – Todd Pletcher – John Velazquez - 12: 4-2-3 - $187,484] This filly, part of a three horse Repole/Pletcher entry, is a solid allowance horse with two wins in a row, one at Monmouth by six lengths going a mile and most recently in the slop closing weekend at Saratoga by 16 lengths in a field of seven at seven furlongs. Both of these wins were on the front end on tracks that had moisture in them. Her one foray in stakes company, as a juvenile, ended in a distant sixth place. She appears to be distance and class challenged in the Cotillion. Nice Allowance Horse.

A Stay Fond [PP 7 – ML 12-1 - Stay Thirsty – Todd Pletcher – John Velazquez - 7: 1-1-1 - $66,900] The second part of the Repole entry is the least qualified of the three with only a Gulfstream Park maiden victory to her credit. She finished fourth in the Gazelle after that maiden win, and since then she has been running in allowance company. A Longshot.

X Run and Go [PP 9 – ML 12-1 -Union Rags – Todd Pletcher – John Velazquez - 2: 2-0-0 - $73,800] This, the third part of the entry, is unbeaten in both career races. The first came at Gulfstream in January going six furlongs and the second was seven months later at Saratoga in another sprint. The dame produced stakes winners, that had success sprinting and at the most 8.5 furlongs. She could be a good horse, but this is an enormous step up in class. She, also likes to be up with the early pace. Lacks Stakes Experience.

Lockdown [PP 1 – ML 8-1 -First Defence – Bill Mott – Jose Ortiz - 7: 2-3-1 - $313,000] Lockdown has been a very consistent sort with a stakes win in the Busanda and top three finishes in the Kentucky Oaks and the Mother Goose. Her most recent performance in the Alabama was the worst of her career, a distant sixth place finish. She has shown the ability to run close to the lead or to make a late move. A closing move would probably be best in here. Contender for Exotics.

Actress [PP 2 – ML 5-1 - Tapit – Jason Servis – Kendrick Carmouche - 5: 1-2-1 - $235,150] If you remember, Actress was the filly that broke her maiden while winning the Black-Eyed Susan on a sloppy Pimlico track on Preakness weekend. Since then she finished third in the Delaware Oaks and then fourth in the Alabama.  She does not have a published workout since her Saratoga start. Actress certainly has quality, but she may not have progressed while others have gotten better. Below the Top Ones.

Proud and Fearless [PP 3 – ML 20-1 - Proud Citizen – Larry Jones – Brian Pedroza - 8: 3-2-0 - $135,520] Trainer Larry Jones has done good work with this filly. In the Spring she won three in row, a maiden claimer and two allowances, one of them at Parx. She was second in the Delaware Oaks after setting the pace and then was not competitive in the Monmouth Oaks. As another one that wants to contend for the early lead, this will be a big challenge. In a Tough Spot.

It Tiz Well [PP 4 – ML 4-1 - Arch – Jerry Hollendorfer – Drayden Van Dyke - 9: 4-2-2 - $586,840] As is often the case, Hollendorfer has sent this filly around the country to face the best competition. She has two grade three wins, first in the Honeybee and then in the Delaware Oaks. Most recently she led the Alabama for the first half of the race and held on for second after getting passed by Elate. I would look for It Tiz Well to run a stalking race at Parx and, if so, she has a chance. A Versatile Contender.

Mopotism [PP 5 - ML 20-1 - Uncle Mo – Doug O’Neill – Mario Gutierrez - 11: 2-4-1 - $281,800] Always willing to ship across the country and take a shot at the big money, Doug O’Neill is doing just that with Mopotism. She is looking for her first graded stakes victory against the best three-year-old in the country without having won a race since February at Sunland Park. The daughter of Uncle Mo is stakes placed on three different occasions and the Cotillion could become the fourth time. There should be plenty of pace to set up her closing move. She had a nice work over the Parx track early in the month. Place or Show Possible.

Sine Wave [PP 8 – ML 20-1 - Big Brown – Ben Perkins Jr. – Robbie Albarado - 6: 3-2-0 - $121,640] Sine Wave ran a big race to finish second in the Monmouth Oaks. She also placed in the Beaumont at Keeneland. She had a big allowance win at Parx in her second career start. Sine Wave has been successful stalking the early leaders, so she will get a good set-up in here, but she will have to make a significant improvement. A Consistent Runner.

Teresa Z [PP 10 - ML 12-1 - Smart Strike – Anthony Margotta Jr. – Javier Castellano - 10: 3-2-2 - $348,540] Teresa Z was a $635,000 yearling purchase for the St. Elias Stable of Kentucky Derby winner Vinnie Viola. This filly comes into the race at her very best. Trainer Margotta used a Penn National allowance victory to prep for her big victory in the Monmouth Oaks. She likes to rally from well off the pace and could the one to pick up the pieces if a hot pace develops. How far will that take her is the big question. Will be Running Late.

Abel Tasman [PP 11 - ML 8-5 - Quality Road – Bob Baffert – Mike Smith – 9: 6-2-0 - $1,467,060] Abel Tasman has already won at six different racetracks, so it is unlikely that the Parx surface would cause her any difficulty. This daughter of Quality Road has been on top of her game since she won the Kentucky Oaks (G1) and began her streak of grade one victories. She is the likeliest of winners in the Cotillion. This field of 12 is not easy, although she has already handled most of these in the past. There is plenty of pace to set up her powerful closing run. If we learned one thing from Arrogate, it’s that no horse is a sure thing. A Very Worthy Favorite.

Salty [PP 12 – ML 5-1 - Quality Road – Mark Casse – Tyler Gaffalione - 7:2-2-2 - $427,670] Salty has been in contention in the big races this summer, running right behind Abel Tasman and Elate while picking up two thirds and a second, all in grade one company. She is a horse who has been her own worst enemy by finding trouble frequently and now she draws the far outside post-position. That could be an opportunity to stay clear and make a big late run or just another excuse. I have picked her in the past to win, but not today. Can She Finally Get a Good Trip?