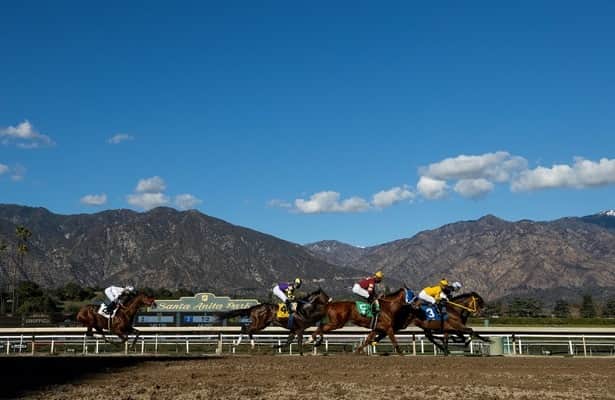 There will be no conventional Triple Crown winner in 2021 after Medina Spirit won the Kentucky Derby and then Rombauer was victorious in the Preakness. However, those two wins have set the table for a possible sweep of the series if another West Coast based 3-year-old can win the Grade 1 Belmont Stakes on June 5.

For the past 10 years or so, the horses that are stabled in California have had a significant edge in the Triple Crown races, especially the Derby and the Preakness.

Since 2000, 3-year-olds from the left coast won the Kentucky Derby 10 times, but they have dominated the Derby with seven of those victories coming since 2010. In the Preakness, west coasters won nine times since the turn of the century and again seven times beginning in 2010.

However, the numbers are very different in the Test of the Champion. Since 2000, West Coast connections won the June classic only four times and that includes the historic campaigns of American Pharoah and Justify, the 12th and 13th Triple Crown winners. Bob Baffert also trained Point Given to a 2001 triumph. The fourth Belmont winner was in 2003 when Bobby Frankel got his only classic victory with Empire Maker.

The 2021 Belmont is expected to feature a strong field of possibly 12 with seven from the Kentucky Derby including two of the top three betting choices being joined by four out of the Preakness, and three from the Todd Pletcher barn.

The field described above does include the three horses from California that are expected to start in the $1.5 million race.

Rombauer won the Preakness by 3  1/2 lengths in a fast time of 1:53.62 that earned a 102 Beyer Speed Figure that will be the highest for any horse in the field on the first Saturday in June. He got a perfect set-up with fast early fractions. Jockey Flavien Prat was able to get Rombauer to use tactical speed as they got into a stalking position in sixth. Down the stretch he was an easy winner by 3 1/2 lengths. That tactical speed and the ability to get the 1 1/2-mile distance are crucial for success in the Test of the Champion.

Hot Rod Charlie was the third betting choice in the Derby and ended up being the third-place finisher. The Doug O’Neill runner battled through the early traffic out of the gate, got comfortable in fifth, and finished just a length behind the winner earning a 100 Beyer. O’Neill opted to skip the Preakness to have a fresher horse at Belmont Park.

Rock Your World was the second choice in the wagering in the Run for the Roses based on his front-end victory in the Santa Anita Derby (G1) that also got a 100 Beyer. He lost all chance at Churchill Downs when he left the gate a step slow and was banged around on both sides. Trainer John Sadler also passed on the Preakness with an eye on the Belmont.