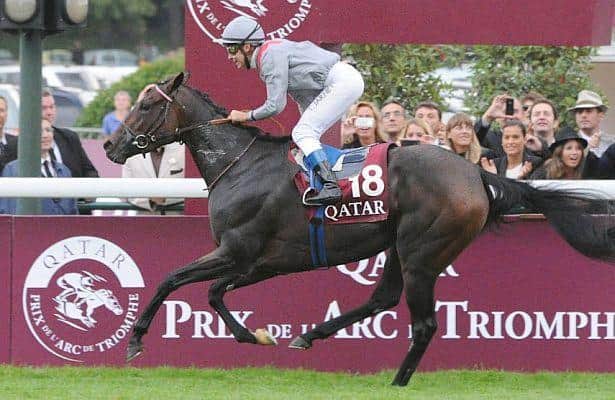 Photo: Eclipse Sportswire - Bob Mayberger
With the running of the Prix de l’Arc de Triomphe on Sunday, all races that could be considered prep races for the Breeders' Cup Turf have now been run. I think that I can hear some racing fans chortle and say, ‘The Arc isn’t a prep race for anything, that the Arc is the Arc, one of the great racing events in the world.’
I can’t argue with the fact that the Arc is a stellar race. It is run at Longchamp, one of Europe’s most glamorous racetracks. If I’m lucky one day I’ll return to Europe and get to go to this great race. However, it does remain a fact that in recent years, horses that have finished in the top five in the Arc, have had a significant impact on the Breeders’ Cup Turf. Does that make the Arc a prep race for the Turf?
Call it what you please, but since 2000, five winners of the Turf had their last race prior to the Breeders’ Cup in the Arc. All of those winners were trained by one of the three best European trainers at preparing horses to make the trip to the year-end World Championships.
High Chaparral finished third in the Arc in both 2002 and 2003 when four-time Turf winner, Aidan O’Brien brought him right back to victory in the World Championships. O’Brien also did it in 2012 after St. Nicholas Abbey finished fifth at Longchamp. Right now O’Brien does not appear to be bringing any of his 2014 Arc runners, but he does have defending champ, Magician as a likely runner.
In 2005 Andre Fabre brought Shirocco from a fourth place Arc finish to the Belmont Park winner’s circle. It appears that Fabre will be bringing the Arc second place finisher, Flintshire, to Santa Anita.
Four-time Turf winning trainer Michael Stoute went from the Arc to a Turf repeat win with Conduit in 2009. This year Stoute as been aiming Telescope for the Breeders’ Cup since his August 20th third place in the Juddmonte International.
Taghrooda finished third in the Arc, but right now it seems that there is only an outside chance that this one will make the trip across the pond. Trainer John Gosden said that they will come if owner Sheikh Hamdan Al Maktoum makes that decision. 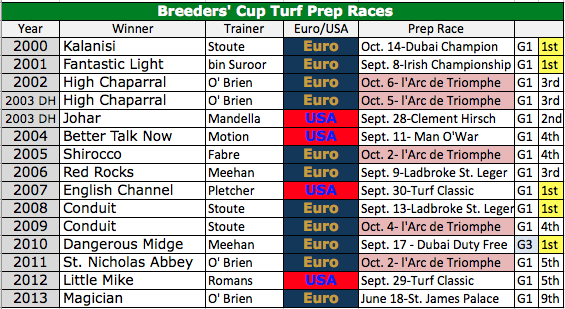 The chart shows where all of the Turf winners since 2000 raced prior to the Breeders’ Cup. For the Americans, New York has been the best place to have had prepped. For the Europeans it has been runners from Longchamp that have by far had the most success in the Turf, so when you start handicapping for the race, “Beware of the Arc.”