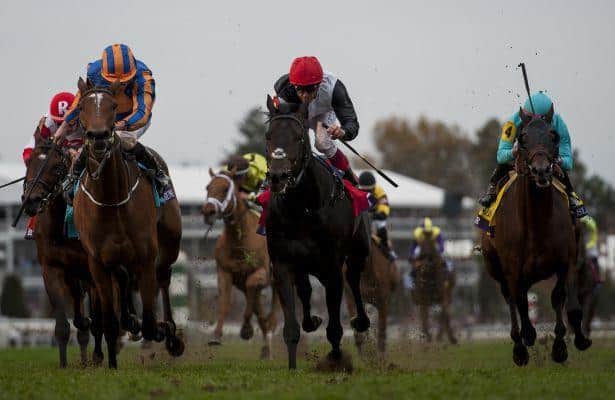 Interested in the history of 2016 Breeders’ Cup Turf? Here is a look at facts and figures about the jockeys, trainers, horses, and betting arranged by the numbers.

1 – There has been one Canadian based winner of the Turf, Chief Bearhart trained by Mark Frostad in 1997 at Hollywood Park. Frostad was the outstanding (Sovereign Award) trainer in Canada in 1997, 1999, and 2000.

4 – The leading jockeys in the Turf, Ryan Moore and Frankie Dettori, have won the race four times.

5 – Aidan O’Brien leads all trainers with five wins in the Turf, spanning from 2002 to 2015. O’Brien ranks third in all-time money won by a trainer at the World Championships behind D. Wayne Lukas and Bob Baffert.

5 – Better Talk Now, who won the Turf in 2004 giving trainer Graham Motion his first Breeders’ Cup victory, competed in this race five consecutive times. After his win in 2004, Better Talk Now finished seventh, second, fourth, and eighth for earnings of $1,793,000.

7 – The Turf is one of the original seven Breeders’ Cup races, along with the Classic, the Distaff, the Sprint, the Mile, the Juvenile, and the Juvenile Fillies.

7 – In 2007 at the very wet and rainy Monmouth Park, English Channel won the Turf by seven lengths, which is the largest margin of victory for that race. That is also the fourth largest in the history of the World Championships.

9 – This year’s Breeders’ Cup Turf will mark the ninth time that race will have been run at Santa Anita.

9 – Only nine times has the betting favorite won the Turf, most recently Conduit was the victor at odds of .90-1 in 2009.

9 – John’s Call is one of four nine-year-olds who are the oldest horses to run in the Breeders’ Cup. He participated in the 2000 Turf.

11 - There are eleven Breeders’ Cup Challenge “Win and You’re In” qualifying races for the Turf. Only four of them happen in the USA: the Arlington Million, the Del Mar Handicap, the Sword Dancer, and the Joe Hirsch Turf Classic.

12 – Horses bred in Ireland have accounted for twelve winners of the Turf.

14– Fourteen American based horses have won the Turf. Since the year 2000, there have been five with Main Sequence most recently in 2014.

18 – European based horses have won the Turf eighteen times, including twelve since 2000. Found was the most recent Euro winner last year.

18 – Joseph O’Brien, who won the 2011 Turf on St. Nicholas Abbey for his father trainer Aidan O’ Brien, is the youngest jockey to win a Breeders’ Cup race. He was eighteen-years-old at the time.

28 – Kotashaan is the oldest living winner of the Turf (1988) at 28-years of age. He is listed as still being at stud in Ireland at Ballycuragh Stud after spending time in Japan until 2000.

53 – The biggest longshot in BC Turf history came in the inaugural running when Lashkari scored at odds of 53-1 and paid $108.80 to win.