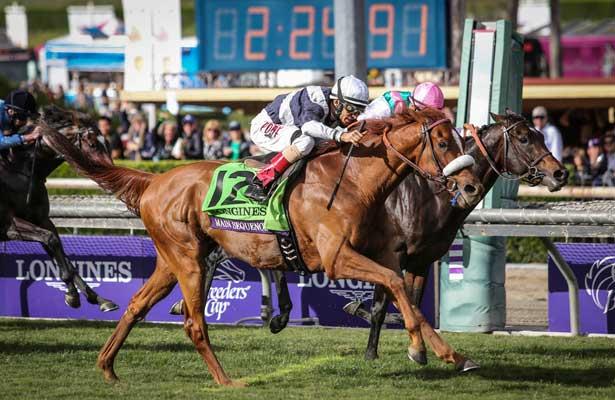 Regardless of which horses face Flintshire in the 2016 Breeders’ Cup Turf at Santa Anita, the Juddmonte owned and Chad Brown trained runner will be a significant favorite. Since moving to the American barn of Brown and starting to run on Lasix, Flintshire has won all of his starts in three straight graded stakes.

Now six-years-old, Flintshire has career stats of 22: 8-10-1 with earnings of $8,809,910, which ranks him seventh all-time for horses that have run in North America. His record here is stellar, 5: 4-1-0. This British-bred son of Dansili has won the Sword Dancer (G1) the past two years, the Manhattan (G1), and the Bowling Green (G2). His second place came in the 2014 Breeders’ Cup Turf when he finished second to Main Sequence.

Flintshire’s North American debut in the BC Turf from two years ago is well worth a look back. In 2014 he went right from a second place finish in the Prix de l‘Arc de Triomphe behind the superstar Treve to travel from France to Santa Anita to run in the Breeders’ Cup on less than a month’s rest.

At Santa Anita, Flintshire, who at the time was trained by Andre Fabre, faced off against Main Sequence. Main Sequence had moved to America from England to run for Graham Motion.  Much like the Flintshire of 2016, Main Sequence loved racing on the turf courses in the U. S. and was unbeaten here while running with Lasix.

In the 2014 Breeders’ Cup Turf, Flintshire was sent off as the second betting choice at odd of 3.40-1 behind the favorite Telescope with Main Sequence as the 6.20-1 third choice. When you watch the replay, you will see that Flintshire held the lead briefly in the stretch, right after he had passed Telescope. However, Main Sequence who relished the American racing experience, made the last and best move to pass Flintshire and get the victory.

Now, in 2016, Flintshire looks very much like Main Sequence. He has the American win streak as Main Sequence did in 2014, he is running with Lasix, which he did not do in 2014. This British turf expatriate is unlikely to be overlooked at the betting windows as Main Sequence was two years ago. Flintshire is going to be very hard to beat come November 5, regardless of which Europeans decide to make the trip to Santa Anita.