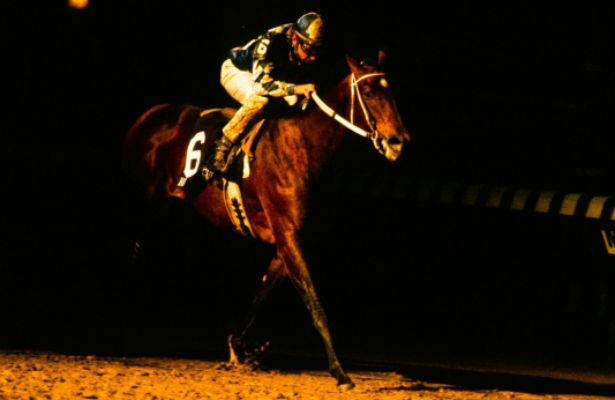 Hop on board the Breeders’ Cup Time Machine and travel back to November 5, 1988, where we will join 71,237 people at Churchill Downs on a chilly damp 50 degree Saturday for an exceptional day of racing. This trip back in time will remind us of the days when the Breeders’ Cup was a one-day event with only seven races. From this historic day, eight of the horses would earn Eclipse Awards and five would eventually be inducted into the Racing Hall of Fame.

The main track was initially SLOPPY but changed to MUDDY as the day progressed. The first World Championship race was the Sprint. Gulch would rally from off the pace to defeat a field that included Precisionist and the previous year’s winner Safely Kept. Hall of Fame rider Angel Cordero Jr. was aboard for Hall of Fame trainer D. Wayne Lukas. The win was Cordero’s second in the Breeders’ Cup and for Lukas it was his seventh. Gulch would go on to win the 1988 Eclipse Award as the Top Sprinter.

The Juvenile Fillies were next and the future Hall of Famer Open Mind would bring Cordero and Lukas back-to-back victories. The New Jersey-bred, owned by Lukas’ top owner Eugene Klein, was 15-lengths behind in the early stages of the race according to the call of Tom Durkin. Two others from Klein and Lukas set a quick pace, which enabled Open Mind to rally down the middle of the track to get the win. Lukas would sweep the top three spots in the race from the five juvenile fillies he had in the race. Open Mind was named the Two-Year-Filly Champion in 1988.

The Distaff featured the unbeaten Phipps Stable star Personal Ensign who was looking to close out her career with a thirteenth victory. In what I consider one of the most determined and courageous stretch drives in Breeders’ Cup history, Personal Ensign needed every inch of the long Churchill Downs stretch to get the victory. I remember watching the race that day and thinking that there was no way that she would get up on that wet track while chasing the Kentucky Derby winner, Winning Colors.

The 1988 Distaff would be future Hall of Famer Shug McGaughey’s first Breeders’ Cup victory. Personal Ensign would win the Eclipse for Older Female and would later be inducted into the Hall of Fame.  Second place finisher Winning Colors would get the Award for Top Three-Year-Old Filly and join the Hall of Fame in 2000.

Miesque enjoyed the SOFT turf conditions as she would come from off the pace to beat the boys in the Mile for the second year in a row making her the first horse at the time to win two consecutive Breeders’ Cup races. The French filly, who would never finish off the board in her 16 race career, was trained by Francois Boutin, ridden by Freddie Head, and owned by Flaxman Holdings of Stavros Niarchos. Miesque would win her second straight Eclipse Award as the Top Turf Female and she would join the Hall of Fame in 1999.

It was a big upset in the Juvenile as the .30-1 favorite Easy Goer would be defeated by Is It True, who was trained by D. Wayne Lukas for Eugene Klein. That would be Lukas’ third victory of the day and his ninth career Breeders’ Cup win. Is It True went right to the front out of the gate and repelled all early challenges for the lead and was able to hold off the late closing move of Easy Goer to win by a length. At the end of the year Easy Goer would win the Top Juvenile Eclipse Award and would go on to join the Hall of Fame.

The biggest price of the day came in the Turf when the 12.40-1 Great Communicator beat the top two favorites. He was rushed right out of the gate to the lead by jockey Ray Sibille. The slow early fractions of :51-3 and 1:17-2 on the soft turf allowed the winner to have enough left to fight off all challengers. Down the stretch there were four horses across the track and Great Communicator lost the lead, but he fought back to give Sibille a Breeders’ Cup win in his first and only mount in the World Championships. Sunshine Forever, who finished second, would win the Eclipse Award for the Male Turf division.

The 1988 Classic, which was run under dark conditions, was nicknamed the “Midnight Classic”. Alysheba would battle Seeking the Gold in the final furlong and prevail by half a length.  Alysheba at the time would become the world’s richest horse after winning the $3,000,000 purse.  For Alysheba’s Hall of Fame connections, jockey Chris McCarron would win his second of nine career Breeders’ Cup races and for trainer Jack Van Berg this was his lone BC victory. Alysheba would go on to be named Champion Older Male and Horse of the Year for 1988 and he would join the Hall of Fame in 1993.

Is the 1988 Breeders’ Cup the best edition of the World Championships? The performances of Personal Ensign and Alysheba could be enough, but throw in Miesque and Open Mind running in front of a one of the largest crowds in Breeders’ Cup history, along with a couple of big upsets, and you end up with an amazing day of racing.