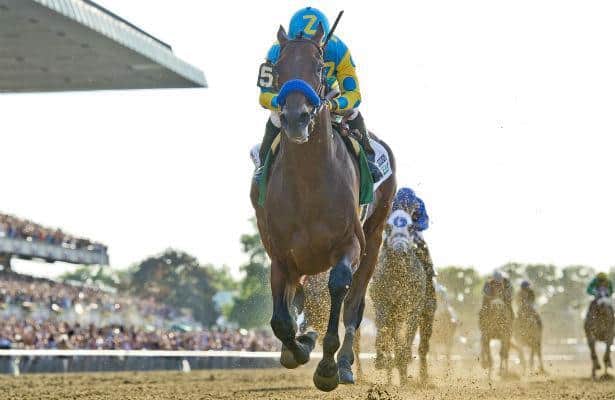 It is finally Breeders’ Cup week, the World Championships, in the greatest year of thoroughbred racing in the 21st century. Yet, I find it very hard to believe that I have to jog the memories of some of you horse racing fans.  Do I really have to go through what happened this year? Do I really have to give you a nudge? We had a horse do something that hadn’t happened in a very, very, long time. Do I need to say, Triple Crown winner? Just a friendly reminder, he is American Pharoah.

I know, I get it, it is part of horse racing to try and beat the favorite. It happened all through the Triple Crown, and it seems to be happening again. Some people think that American Pharoah is not going to win the Breeders’ Cup Classic on Saturday.

It was very hard for the favorite to win the Kentucky Derby from far outside, in a field of eighteen, going the Classic distance of a mile and a quarter. Just a reminder, American Pharoah did it.

2015 had one of the best crops of three-year-olds and now the horse had to go to the Preakness with only two weeks rest to get his fourth win in a row, while travelling the unusual distance of a mile and three-sixteenths. Throw in horrible weather conditions and it became a more daunting task. Yet, one horse handled it all with aplomb. Just a reminder, it was the son of Pioneerof the Nile, American Pharoah.

Now on to the Test of Champions, the Belmont Stakes, going a mile and half. No horse had been able to win the Triple Crown for 37 years. The owner of 2014’s star three-year-old declared after his defeat in this race that it was an unfair and impossible task because horses rested up and were lying in wait to upset the favorite. In 2015, they waited once again, they were fresh and talented, but 90,000 people got to see history made on that first Saturday in June. This time I really don’t need to remind you, do I? Well, just in case, it was the Zayat Stables homebred, American Pharoah.

Then, finally a couple of months between races, but it was back on the airplane again, time to meet all of the fans in the barn and to parade at the racetrack. Back in the air again, this time to New Jersey, to his fifth different track since March. The Haskell was the stage for another rousting victory. By now you are getting my point, that only one horse could handle this kind of campaign and perform at the highest level. Yes, of course, it was American Pharoah.

As happens to even the very best thoroughbreds, American Pharoah tasted defeat, narrowly losing in the Travers. They headed back to California to rest-up and to gain lost weight. Now it is time for the Breeders’ Cup Classic and I have heard and seen the comments of racing fans who seem to have forgotten what American Pharoah accomplished this year and they think that he is not the likely winner of the Classic.

Many different horses have had their moment or two in the spotlight, but those horses come and go. American Pharoah has faced top competition on racetracks all over the country, winning all but one of those races. I don’t think any other Classic participant can check all of those same boxes and he is my pick to win the biggest race on the biggest stage. In the end let me remind you one last time that he is American Pharoah and he is the Horse of the Year.