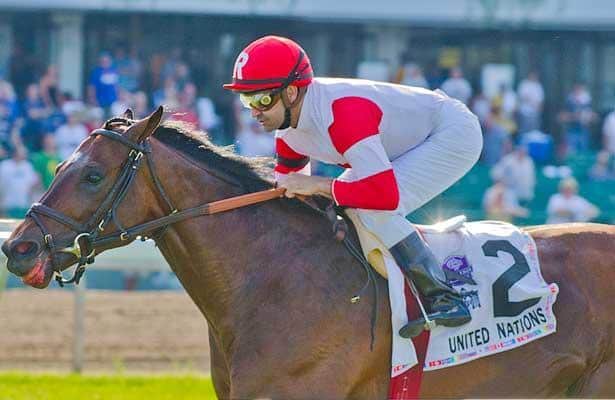 Photo: Eric Kalet/Eclipse Sportswire
There is plenty of great racing in New York and New Jersey during the Fourth of July weekend. Belmont Park kicks it off with the very smart Stars and Stripes Festival on Saturday. On Sunday, Monmouth Park has one of the best cards that I have seen at the Jersey Shore in several years. The card features very deep and competitive fields anchored by the $150,000 Salvatore Mile (G3) and the $500,000 United Nations (G1).
I recommend that you save plenty of your wagering dollars for Monmouth because in races six through twelve, where you can bet the 50¢ Pick 5, the 10¢ Jersey Shore Pick 6, and a Pick 4, the field sizes are: 11, 12, 14, 12, 12, 12, and 10.  The rain has cleared the area and beautiful weather is expected all weekend, so the Monmouth track should be fast and all races should stay on the turf.
Here are my top three choices and analysis for each of the final seven races. I will allow you to use them as you attack the great wagering opportunities at Monmouth Park.
Race 6 (3:09 ET) – New Jersey-bred Allowance N1X, six furlongs, $27,000 Pick 5 carryover  - #6 Cheddar Chub has had two improving races since a layoff and this winning pattern has him set to come from behind what should be a contentious early pace. #4 Loverbil comes from the unpredictable and always dangerous barn of trainer Jorge Navarro. Loverbill is running first time for Navarro (43%) off of a layoff (34%) and is back to state bred company for the first time since 2013. #11 Slow Heart Break is turning back in distance to 6F where he broke his maiden first time out.
Race 7 (3:39 ET) – OC30/N2X, mile and a sixteenth TURF, 10¢ Jersey Shore Pick 6 - #4 State Flag ran a big race first time off a layoff at the same level at Parx for the red hot New York barn of trainer Bruce Brown. Rajiv Maragh is in from Belmont to ride. #10 Just Foolin Around won a first level allowance off a layoff and comes right back. #3 Michael With Us scratched out of a Friday race and has a lot of back class in stakes races as he makes his 2014 debut.
Race 8 (4:10 ET) – New Jersey-bred Allowance N1X, mile and 70 yards - #5 Chunnel was stakes placed going a mile on the turf last time and now returns to the dirt on which he broke his maiden. Meet leading jockey Paco Lopez will need to show some finesse and not rush this one to the front. #9 Caylee’s Song is making his third start off a layoff. He improved in his two previous races and should be ready for a peak performance. #12 Gadget Man returns to Jersey-bred races after breaking his maiden against open company.
Race 9 (4:41 ET) – Allowance N1X mile and a sixteenth TURF, Pick 4 - #4 Picozza has made his last four starts at GP, Kee, CD, and Bel including a second in the Transylvania (G2). A top effort should give this Bravo/Pletcher runner the win. #7 Kildare ran a big race off a layoff having prepared at a training facility. That race should have him ready for a top effort. #6 Kwacha has two second place finishes in his last two for trainer Bob Dibona who is 4 wins for 10 at Monmouth. 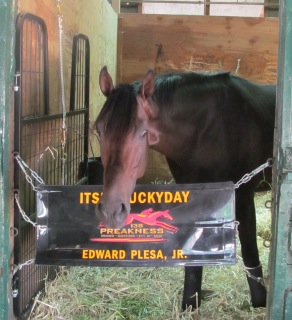 Race 10 (5:13 ET) – Salvatore Mile (G3) – I am going to bravely and maybe foolishly pass on the David Jacobson runners in this stake and go with #1 Itsmyluckyday. Although the BSFs of 90 and 93 for his last two wins have not been very high, he did win those races pretty easily. If we draw a line through #2 Bradester’s last two races in the New Orleans Handicap and the Alysheba, he won the Mineshaft (G3). His best can easily take the Salvatore. I really like the big closing move of #3 Sailor’s Revenge in the Mountainview against Last Gunfighter and Valid.
Race 11 (5:43 ET) – OC20/N1X mile and 70 yards - #11 Jax Maxx ran a big race on the turf off a layoff. Trainer Ben Perkins returns him to the dirt where he has all 10 career wins at distance that he loves with 6 wins in 15 tries. #8 Inmyfathersimage lost by a nose in a comeback Belmont sprint that appeared to be a workout for this router. #1/1A entry of trainer Liam Benson could provide an upset at a generous price. This young trainer has piled up a bunch of second place finishes at the meeting.
Race 12 (6:13 ET) – United Nations (G1) mile and three-eighths TURF, televised on Fox1 Sports Network – I love saying this: #1 Charming Kitten cuts back from the two mile Belmont Gold Cup for this race. He was ultra impressive that day. #3 Twilight Eclipse is going to need a better ride from Jose Lezcano today than he gave him in that Gold Cup. His winter form his certainly good enough to win. Chad Brown seems to have figured out European import #2 Ghurair and with Gary Stevens staying aboard he has a shot to take the UN.
Chunnel, from race 8, would be my SINGLE of choice in the Pick 5 and Pick 6.
Here are my tickets for the Pick 5 carryover.

I hope this analysis helps you cash some big tickets at Monmouth Park, but for a sure thing do not forget to cash in on the Jersey Shore beach towel giveaway. See you there Sunday.