Another Big Win for Cathryn Sophia 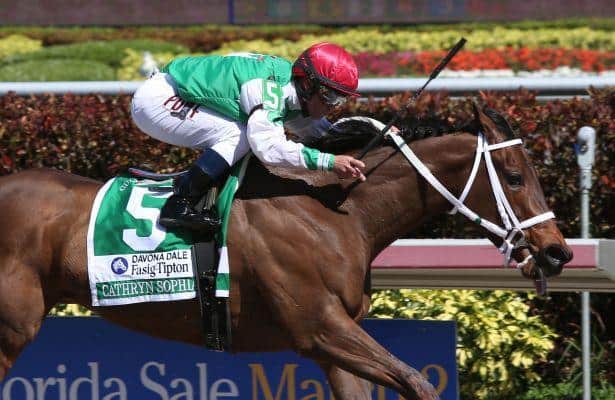 Twelve and three-quarters, sixteen and a quarter, five and a half, and now seven lengths in the $200,000 Davona Dale (G2); those are the winning margins in the four races in the unbeaten career of the three-year-old filly sensation, Cathryn Sophia.

Every step of the race, Cathryn Sophia ran to her .20-1 odds, sitting patiently behind the early pace setters, just as she had done in the Forward Gal (G2), which was also run at Gulfstream Park. When Jockey Javier Castellano asked her to run she blew past the leaders and opened up to her big winning margin very quickly and very easily. In her fourth start she showed none of the erratic movement down the stretch that she had displayed in earlier starts.

The early pace in the one-turn, one-mile race was set by R Girls a Charmer, Dearest, and Bagema. Castellano, who was riding the favorite for the first time because he inherited the mount from Joel Rosario, recently injured in a spill, was content to sit just outside and behind as the fractions of 24.05, 47.12 and 1:11.88 were run.

Castellano asked Cathryn Sophia to run just as they were coming out of the clubhouse turn. As they straightened away, the speed with which she opened up a big lead was impressive and the final fractions were 1:24.26 and 1:36.61. The last two quarters went in 24.38 and 24.35.

This stakes race is named for the Hall of Famer, Davona Dale, who was bred by and raced for the legendary Calumet Farm. As a three-year-old filly in 1979, Davona Dale dominated her division with eight consecutive wins that led to winning two versions of the Triple Tiara. She swept the National Triple that consisted of the Kentucky Oaks, the Black-Eyed Susan, and the Acorn. The daughter of Best Turn also took the New York Tiara that began with the Acorn and included the Mother Goose, and the Coaching Club American Oaks. Her final racing record was 18: 11-2-1 with earnings of $641,612. As a broodmare she produced 4 fillies and 8 colts with La Voyageur, who finished third in the 1989 Belmont Stakes, being her most successful runner.

After the race, Trainer John Servis of Smarty Jones fame said, “She’s been very sharp coming into the race. I was a little concerned, maybe a touch too sharp, that she might want to be out there on the lead with the first time going that far. But like she showed in her last race, she settled so nice and Javier did a great job.”

At this point there seems to be little question that Cathryn Sophia will be able to handle more distance around two turns, thus moving her into competition with the best in the division, Songbird and Rachel’s Valentina.

“When you get into those two turn races, you know the grade ones and those, you have to have that kind of horse,” added Servis. “They have to be almost push-button where they can turn it and turn it off. When you call on them you have something there. She has shown us that in the last two starts.”

Looking ahead Servis said, “I’m sure the Gulfstream Park Oaks (G2) [April 2] is one of the races on the schedule, but we will let her tell us how she is doing.”