Actress gets her maiden win in the Black-Eyed Susan 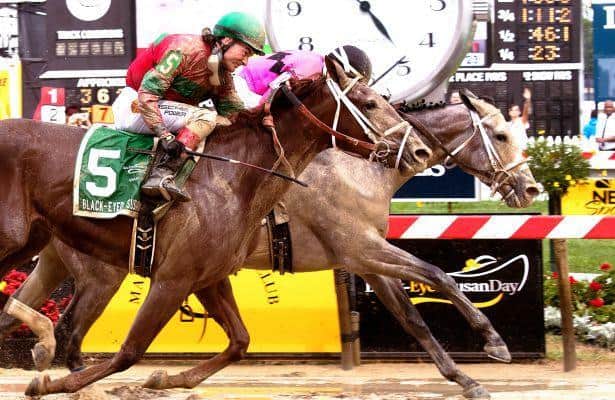 A hometown jockey in Nik Juarez made good in the $250,000 Black-Eyed Susan (G2) when he guided Actress to an unlikely maiden victory in the signature race for three-year-old fillies at Pimlico Race Course. Actress was making only her third career start for trainer Jason Servis and owner and breeders, Gary and Mary West.

“This is home for me. I’m from Maryland,” said Juarez. “My grandfather was an outrider here for thirty years. My father rode here. To do this here is an amazing feeling. It’s just a dream come true.”

When heavy rain began falling during the 10th race and continued until just before the field of eleven broke from the gate for the Black-Eyed Susan, the racing surface changed quickly from fast to SLOPPY.

Actress began her racing career exactly two months ago when she closed from tenth to finish second in a maiden special weight at Gulfstream Park. Encouraged by that first race, Servis put her in the seven-furlong Game Face Stakes, a restricted overnight stake also at the Florida track, where she again got second, this time racing closer to the pace.

Juarez had ridden her in both of those starts and said, “I really got to figure her out. I really think she needed two turns. We knew she liked to be covered up.”

Out of the gate, it was Tapa Tapa Tapa who went right to the lead and would set the early pace ahead of Full House and the favorite Moana. Tapa Tapa Tapa would extend her margin out front for the first six-furlongs as she carved out fractions of 23.12, 46.38, and 1:11.56.

Initially, Actress was running in ninth position 19 lengths behind, after a half mile she was still 16 behind, but as the field approached the final turn this daughter of Tapit began to quickly gain on the leaders. Actress was closing so fast and easily on the tiring pace setters that by the time they hit the stretch Juarez found himself right on the heels of those horses and had to steady her and veer to the outside to find a clear path.

Juarez added, “I saw a hole there and she was making such a good move, but when I got there it closed. She was still able come around and still get the job done.”

Once clear Actress had to hold off the late charge of the Todd Pletcher trainee, Lights of Medina, who had rallied from eighth position. At the wire, Actress prevailed by a head to break her maiden in a final time of 1:51.87.

“We always liked the filly,” said Servis. “I have to give credit to the Wests. They gave me a chance and said that if you really feel that, then let’s go for it. We went for it and it worked out. It was great, terrific.”