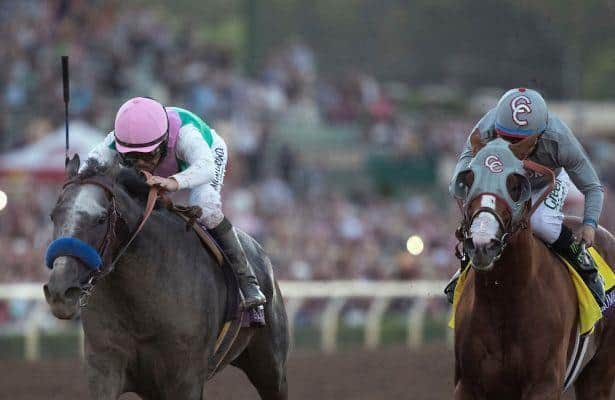 The inaugural running of the $12,000,000 Pegasus World Cup Invitational (G1) on Jan. 28, 2017, may feature a rematch between California Chrome and Arrogate. The race's website has a countdown clock that prominently announces that it is a mere 73 days until what will be the world’s richest horse race.

According to pegasusworldcup.com, “The innovative Pegasus World Cup Invitational, to be contested at 1 1/8 miles on the dirt, is restricted to 12 horses. Twelve owners have reserved a spot in the starting gate for $1 million USD. They can race, lease, share a starter, or sell their place in the gate. The owners will share equally in the net income from betting, media rights and sponsorships. The winner of the race will earn a world-record $7 million USD.” The shareholders also have first option to buy a spot in the 2018 Pegasus World Cup.

The announcement of the creation of the Pegasus World Cup came on May 11, 2016, the shares went on sale on May 16, and all twelve were sold by May 19. The most recent list shows the names of the owners of a spot in Pegasus as follows.

Reddam Racing, LLC, is headed by Paul Reddam, who at the time of the sale had just won the Kentucky Derby with Nyquist. Reddam had his share on the market for $2,000,000 during the summer. Since then Nyquist was retired from racing.

Ronald & Jerry Frankel are prominent producers of Broadway shows who own thoroughbreds in a wide variety of partnerships. They shared ownership of Dayatthespa, who was the winner of the 2014 Breeders’ Cup Filly and Mare Turf and the Eclipse Award for Top Turf Female.

Jim McIngvale purchased his share with the plan of running his 2015 Champion Sprinter, Runhappy. His return to racing did not go as planned, and he was retired to stud at Claiborne Farm.

Coolmore is owned by the powerful international racing team of the Magnier Family, along with Michael Tabor, and Derrick Smith. Trainer Aidan O’Brien has the finest thoroughbreds in the world with the Breeders’ Cup Turf winner, Highland Reel, atop the list of horses that Coolmore could run in the Pegasus.

Mohammed Faissal Al Saud and Earle I. Mack, LLC - Al Saud is member of the Royal Family of Saudi Arabia and Mack is a real estate executive and former US Ambassador during the George W. Bush administration.

Starlight Pegasus Partners – Jack Wolf, the co-Managing Partner of Starlight Racing, is also the CEO of the Pegasus World Cup. Starlight was the owner of Hall of Fame and multi-Eclipse Award winner, Ashado.

Dan Schafer is an owner of a chain of pizzerias in Detroit and an avid racing fan.

Adena Springs, which is the Kentucky Farm owned by the Stronach Group, plans to run the Woodward Stakes winner, Shaman Ghost, in the Pegasus.

Reeves Thoroughbred Racing came to prominence as the owner of the Mucho Macho Man, the winner of the 2013 Breeders’ Cup.

Rosedown Racing Stables is owned by Jeff Weiss, a Florida real estate executive and owner of a small racing stable.

With only two of these shareholders having probable runners in the Pegasus, those being California Chrome and Shaman Ghost, it will be very interesting to follow the deals that will have to be made over the next couple months. The other 10 on the list will have to exercise their right to “race, lease, share a starter, or sell their place in the gate”.

The new race has grade one status because technically it is a renamed version of the Donn Handicap. The Pegasus is scheduled to be last of seven stakes races.

The Pegasus experience stands to be a pricey experience for the fans, also. Since Gulfstream Park has very little traditional racetrack seating, tickets for the Pegasus WC are available for various venues around the property. Seats recently went on sale with prices ranging form $100 to $785. The cheapest ticket is for a spot at Stretch’s Tiki Bar or in the casino and the highest price is for Ten Palms, the trackside restaurant. Tickets are being sold for spots in all the bars and restaurants on the property, as well as in the Poker Room.