2016 Kentucky Derby: A First Look at the Trifecta 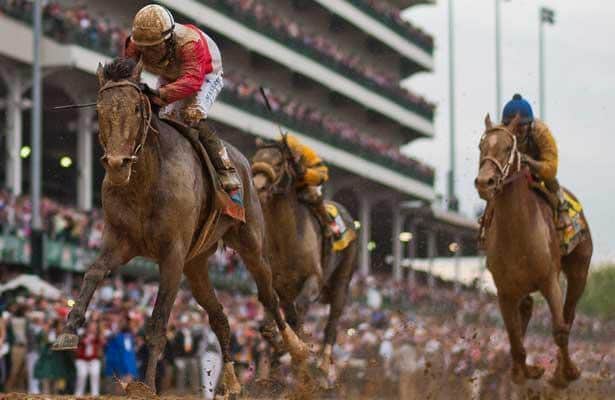 The Kentucky Derby field size of 20 presents unique challenges and opportunities to the American bettor. As one of those handicappers that faces and bets on a field of 20 only once a year, I adjust my wagering strategy to fit this very special betting opportunity. On the First Saturday in May I become a trifecta player.

As the horses move along the Road to the Kentucky Derby and earn enough points to qualify for the race, I find myself thinking about whether they will fit into my “Top 3”. You have probably heard me on HorseCenter talking about whether a horse is in my “Top 3”. At those times I am not just thinking about my Derby Top 10 for the show or the NTRA poll of which I am a voter. I am constantly evaluating whether each horse has a chance to finish in the Derby trifecta.

The rest of the year when 12 is considered to be a big field, I rarely play the trifecta. I find that the takeout on the bet, which at most tracks is around 25%, is way too high and is too difficult to overcome on a regular basis. In the Derby, however, the payout of trifecta has been so hefty that I overlook the takeout. [If you are interested in takeout rates for all types of wagers, the Horse Players Association, HANA, publishes a chart for all racetracks and it is a wonderful resource.] At Churchill Downs the trifecta takeout is 22%, which is on the low side for that particular wager.

In the chart of Kentucky Derby trifecta results you can see some amazing payouts. Payouts of above a $1,000 are common even when the favorite has been part of the result. Note that the top choice has hit the board nine times since the year 2000 by finishing first or second.

The wager is available for a minimum bet of 50¢, which allows a smaller player to make a trifecta ticket using a lot of horses and that is what I do. In 2014, when the favorite California Chrome won the Derby, I hit the 50¢ trifecta playing a ticket with 192 combinations that cost $96 for a payout of $856. Last year American Pharoah won and the 50¢ trifecta paid an unusually low $50.50. I had it, but lost money on the wager.

When I make my ticket I look for a horse or horses to key in the trifecta, looking for a runner or runners that are most likely to finish in the top three. Then I try and identify the other horses that have a chance to fill in the other spots in the trifecta, of course hoping that they will have higher odds. With that in mind let’s take an early look at the 2016 Derby trifecta based on the current top 20 in the points standings.

Here I am looking for horses that I trust to get in trifecta. Last year it was American Pharoah. I was very confident that he would also win the race. In 2014 it was Danza at 8.70-1 who ended up finishing third. I will use one or two key horses on the ticket.

Mohaymen has been my top choice to win the Derby all year long. The son of Tapit has an effortless running style and possesses a nice turn of foot, which makes me confident that he can get the Derby distance and be in the right position throughout the race. I have a high level of confidence that he is a trifecta key.

Even though I don’t have Mor Spirit as highly ranked as other writers because I don’t feel that he is the likeliest of Derby winners, I do have confidence that he is going to finish in the money. That makes him a great horse to key in the triple.

HORSES TO COMPLETE THE TRIFECTA

Here I will use five, six, seven horses, hoping that at least one of them will have high odds and produce the desired big payout. In 2014 it was Commanding Curve at 37.80-1. I like most of these horses to be late runners, the kind that can get the distance and pass the many tired horses that needed the finish line to come after nine furlongs.

Let’s watch the 2014 Run for the Roses and see how that trifecta played out because it has the kind of race flow that is becoming the norm in the current Kentucky Derby era.

After Tom’s Ready finished second in the Louisiana Derby, I am willing to take another shot with trainer Dallas Stewart.  He has proven that he can get a long shot ready to run a big race under the Twin Spires as he did in 2014 and in 2013 when Golden Soul finished second at 34.50-1 triggering a $6,925 triple.

Destin demonstrated a successful stalking style and the ability to put strong races together. This brother of Creative Cause is improving and should be able to compete in the Derby all the way to the wire.

The people who don’t like Shagaf say that he is not fast enough to win the Run for the Roses and that may be true, but he can grind out the distance. That is the kind of horse I want coming down the long stretch at Churchill Downs passing tired horses.

I will have to use Mo Tom even after the two trouble filled trips at the Fair Grounds. He has shown a strong closing kick in all of his races and I can see him swinging wide in the final turn and barreling down the stretch in the Derby. Everyone knows this about the son of Uncle Mo, so he won’t be a big long shot, but he sure won’t be a short price either.

I love Nyquist’s determination and competitive spirit and I want that kind of horse fighting for the Derby money. Like many others I have concerns about him and the Derby distance, otherwise he would be one of my key triple horses.

Whitmore is another late runner who will be a healthy price in the Derby. I don’t expect him to win the race, but he has the capability to finish second or third. I like to have that kind on my trifecta.

I hope I have gotten you started thinking about the Derby trifecta and this opportunity to make some money on the biggest race with the biggest field of the year. When all of the prep races are finished and the field firms up, I will be back with less hypothetical horse selection and more specifics about ticket construction. However, for now you can be thinking about which horses might fit into your Derby “Top 3”.