If a time capsule from Churchill Downs' 2018 season was left behind, what types of images would need to be inside?

Several things come to mind: Justify, the Kentucky Derby winner who trained there throughout the Triple Crown; the Breeders' Cup's return; and the death of beloved track official John Asher, the personification of the Derby.

Below are 29 favorite images I captured this year under the Twin Spires, all of which I'd include in that time capsule.

This is truly where it all begins.

A rider and horse prepare to go out to train on the track during Derby week.

Exercise rider Penny Gardiner gives her horse some love as the morning sun reflects off the grandstand.

Justify looks on as he gets his morning bath.

Hoppertunity also stabled at Churchill Downs during Derby week. He ran in the Alysheba (G2) and finished fourth. The fan favorite was retired later that year after three more starts. The 7-year-old finished with 34 starts and $4,712,625 in earnings.

Justify drew large numbers to Churchill Downs each morning as he trained for the Triple Crown series.

Sunny was Justify’s lead pony on site. During his downtime, he showed off his personality.

After winning the Triple Crown, Justify returned to Churchill for a parade. Fans crowded outside of the paddock to get a glimpse of him before the champion left for California.

Cairo Cat won the Iroquois Stakes (G3), the first race on the road to the Kentucky Derby.

Serengeti Empress took the Pocahontas Stakes (G2) on the same card, beginning her quest for the Kentucky Oaks.

Mind Your Biscuits dominated Toast of New York in the Lukas Classic (G3). The next time we saw him on race day at Churchill was in the Breeders' Cup Classic.

Breeders' Cup week at Churchill Downs begins as Classic runner Lone Sailor walks back to his barn after morning training.

Eventual Juvenile Fillies winner Jaywalk gets some love from her exercise rider.

Talismanic was among the flashiest of all the 191 horses that were stabled at Churchill for Breeders' Cup.

The 2018 Arc winner Enable led turf training each day. Watching the Euros on the grass was a real treat.

Bucchero was among the top Americans on the green. Here he's seen coming off the turf.

Dubai World Cup winner Thunder Snow looked fantastic leading up to his run in the Classic.

Roy H’s groom showed his excitement after he went back to back in the Breeders' Cup Sprint.

Expert Eye, winner of the Breeders' Cup Mile, led to jockey Frankie Dettori with the traditional flower toss on their way to the winner's circle.

Later on the card, Wonder Gadot took the early lead in the Breeder’s Cup Distaff.

The winner, Monomoy Girl, chased down Wonder Gadot going into the first turn.

Enable became the first horse in history to win the Arc and Breeder’s Cup Turf in the same year.

Getting close up to Mendelssohnn during the Classic's post parade.

Accelerate in the thick of it all before his charge into the Horse of the Year conversation. 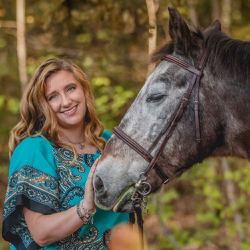