Dew: Why Spinoff will key my 2019 Kentucky Derby bets 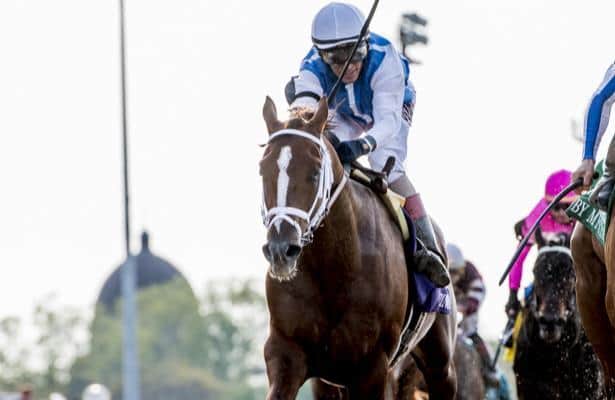 With less than three weeks until the 2019 Kentucky Derby, it’s probably not a bad time to get yourself as familiar as possible with all of the horses that will take their spots in the starting gate at Churchill Downs on May 4.

It is arguably the best wagering opportunity that horse racing has to offer all year. Even last year, as logical horses occupied the top three finishing positions, the superfecta paid more than $19,000 for a $1 wager — and cashing a ticket like that requires the bettor to do his or her homework in advance.

Starting this week at my website, LoneSpeed.com, we will be covering at least one Derby contender each day as we work to reduce our key horses to a workable number. While the ALL button can be your friend here and there, as a bettor, you need to develop conviction somewhere and take stands for and against as many runners as possible.

For me, one horse has emerged as my key horse, at least for the moment. This is not to say I will pick him to win — I still might — but my key horse is the one I will be requiring to hit the board if I am to hit my big Derby bets. And the horse I have singled out this year is Spinoff.

Todd Pletcher is in the unusual position of flying under the radar this year. It seems funny to say that about a trainer who should send two to the post in the Derby. But doesn’t it seem like in most years, he’s got at least one of the top choices? Neither Spinoff nor Cutting Humor should attract a lot of support at the windows, and that’s part of the reason that I like Spinoff as an interesting key horse.

I am getting the feeling like connections mapped out a plan for Spinoff early in the year, and that plan has gone, well, as planned. But let’s start by taking a look at his juvenile season.

Spinoff broke his maiden at first asking going five furlongs at Gulfstream Park in June. Now, Gulfstream Park in June is not exactly where you’d expect to see a future Derby winner make his debut. I’ll give you that. But he did beat future stakes winner Garter and Tie in that race, as well as next-out winner Reservenotattained. It’s not like he was facing a field of total bums.

Then Pletcher sent him to face stakes company at Saratoga, where he was the longest shot in a four-horse field and ran a non-threatening third.

According to Equibase, Spinoff didn’t work after that August stakes attempt until Jan. 11. But he has breezed steadily since then, and it appears the time off did him some good. He made his sophomore debut going a route of ground at Tampa Bay Downs, where he crushed four foes, including stakes-placed Cave Run, by 11 lengths.

From there it was on to the Fair Grounds and the Louisiana Derby and an honest second-place effort behind By My Standards. Spinoff took the lead in the stretch before giving way late to the winner who was making the fifth start of his form cycle and fourth start at his home track. It’s hard to knock the effort put forth by Spinoff given it was just his second start since August.

Gone are the days when we were forced to demand a certain number of career starts or even prep races from our Derby contenders. Who are we to argue with Pletcher if he thinks two preps are enough for Spinoff? I think you have to assume that the year has gone exactly as Team Spinoff had hoped.

From a tactical standpoint, Spinoff has the speed to be close. And he showed in the Louisiana Derby that he can stalk and pounce when asked.

Is he good enough to beat the big guns in this group? Well, that of course remains to be seen.  But we just might get 30-1 on a well-bred Pletcher trainee that appears to have a ton of upside.  Maybe we’ve seen all of what Game Winner, Omaha Beach, Improbable, Tacitus and the others are capable of. Maybe Spinoff can take that next big jump while the favorites run the races we’ve already seen them run.

If Spinoff does in fact continue his improvement, don’t be surprised if he’s the one with dead aim on the leader late in the Kentucky Derby.

» Horse: Spinoff
Meet Justin Dew
Justin Dew founded LoneSpeed in 2018 out of a desire to bring racing fans and bettors together to discuss about how they approach the game. Before that, he contributed to the official Kentucky Derby website and TVG, among other outlets. Oh, and he wrote this bio in third person, too.
Website: LoneSpeed.com
Twitter: @justindew