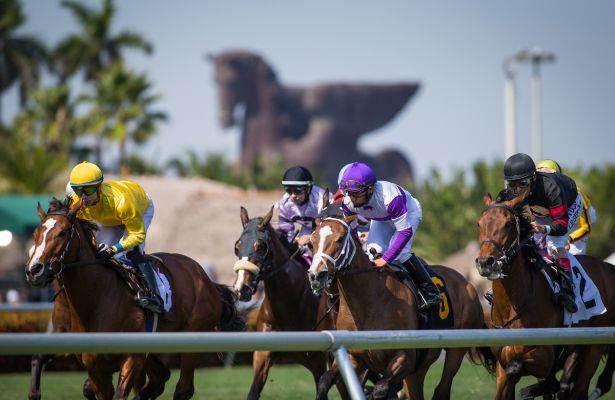 The eight fillies and mares entered in Saturday’s Grade 3 Marshua’s River at Gulfstream Park have run a combined 60 races on grass. It’s intriguing to me to see Rose Tree, a 5-year-old mare by Harlan’s Holiday and trained by Jonathan Sheppard, in this field. She accounts for just one of those turf starts.

While Rose Tree’s one prior grass effort came over this very Gulfstream turf course, the vast majority of her 14 previous races came scattered around Pennsylvania’s ovals at every distance — from 5 1/2 furlongs to a mile and a sixteenth, on dirt and synthetic. What is more, her last start was a romping win on dirt…at Gulfstream!

All of the above just makes this seem like a bit of an interesting spot for Rose Tree. And if she’s to be victorious in just her second grass try, she’ll have to beat several more accomplished rivals. Six of her seven foes are stakes winners on the lawn, and Valedictorian has two wins and four board finishes from seven starts over this course.

That said, Rose Tree comes off two consecutive bullet works over the Gulfstream dirt, and Brian Hernandez Jr., who was aboard for the win in her last start, has the return call Saturday.

If you’re looking for an actual handicapping angle that falls in Rose Tree’s favor instead of merely speculative assessments, it’s worth noting that a few of the others entered in here appear to prefer to be up front early, and I’m Betty G and Valdictorian seem at least probable to go at it early. Rose Tree does her best running late, and any quickness at the start will help her chances.

Let’s make a small win/place wager on Rose Tree on Saturday. It’s a wide-open event, and she could go as the longest shot on the board. So why not take a swing and see if we can connect at a price with a horse that does not look nearly as hopeless as the tote board might suggest?

If your angle is more for win bets on the most-likely winner, give La Signare a look. She’s run big off a layoff before.

Be sure to check out LoneSpeed.com for more wagering insights this weekend.

» Horse: Rose Tree
» Race: Marshua's River Stakes (2019)
Meet Justin Dew
Justin Dew founded LoneSpeed in 2018 out of a desire to bring racing fans and bettors together to discuss about how they approach the game. Before that, he contributed to the official Kentucky Derby website and TVG, among other outlets. Oh, and he wrote this bio in third person, too.
Website: LoneSpeed.com
Twitter: @justindew