Verrazano Undefeated But Not Untested...Really? 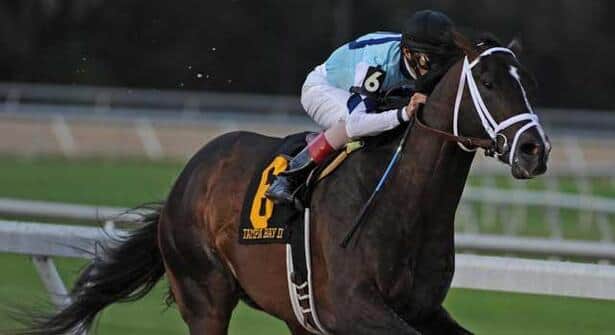 Verrazano remains undefeated after his visually impressive, in-hand Wood Memorial victory.  In the process, he stamps himself as the undisputed Kentucky Derby favorite.  Clearly, this colt needs to be considered a serious contender despite finding the pace and competition conditions experienced in each of his four lifetime starts quite to his liking.  Verrazano is clearly a sustained presser type that is most comfortable being part of the early action.  Will the Kentucky Derby pace be as accommodating to Verrazano as it was in his final preps?  We’ll know more about the Derby pace scenario once the final preps are completed this upcoming weekend.  But, let’s take a look at the Wood Memorial and how it was run for clues as to how much Verrazano was truly tested.

The third line in the chart above shows the splits for the Wood Memorial.  I then compared these splits to other route races run on the card at Aqueduct.  I want to draw your attention to the G2 Gazelle Stakes for fillies and let’s compare the splits produced in that contest and compare them to the splits cut in the Wood Memorial.  What I found particularly striking was the difference in the 6-furlong fractions yielded in these two stakes races.  Note that the Wood Memorial 6-furlong split was run nearly 3 seconds slower than what was posted by the fillies in the Gazelle stakes.  Wow!...now that is remarkable.  I also decided to pull up the fractions produced in the Santa Anita Derby.  This race was run at a fair but moderate pace for the Santa Anita surface.  While the SA and AQU surfaces are different and difficult to compare…regardless, the difference in the splits yielded in these two races was quite impressive.  In fact, if you look at other races run on the Aqueduct undercard, you’ll find that a few of the 7 furlong heats were run much faster than 7 furlong races contested on the Santa Anita undercard.

So, you be the judge…was Verrazano “tested” or did he and Vyjack both have plenty of energy left in the tank after negotiating the dawdling pace to run on even terms with one another throughout the stretch?  Who ran the best race?  You would have to give serious consideration to closer, Normandy Invasion, who overcame the slow pace to run fastest of all in the final two furlongs in this race.

In what will be one of the more contentious Kentucky Derby fields in recent memory, eliminate the noise, hype and all the distractions and focus on “how” these horses have run their preps and how that compares to 20 years of historical performance thresholds.  Go to www.superscreener.com to learn more about how you can get an insiders view of what it take so win and finish on the board in the Kentucky Derby.