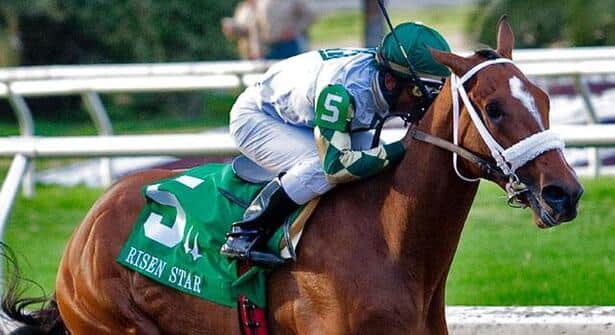 There is plenty of Kentucky Derby prep action this weekend with the G2 Louisiana Derby and G3 Spiral Stakes on tap for Saturday and the G3 Sunland Derby going on Sunday.  All three are terrific betting races even if the quality of each remains suspect.  For the first time this year, each of the preps will be contested at the all-important 1 1/8 distance.  It’s get it done or get out of the way time!

Kelly Breen must be grinning ear to ear as his speed/stalker coupling loom large in determining the outcome of the Louisiana Derby.  Pants on Fire will be sent and Mucho Macho Man will sit just off that one but will have to work hard early and long to stay in contention to the stretch.  It is at that moment Mucho Macho Man will show us what of mucho macho man he really is…Derby contender or just another pretender?  He looks more like the latter to me.  Nice 3 year-old that will be competitive at the middle distances but not a genuine Derby win contender.  His last two races are mediocre at best from a pace and final speed perspective.

While the Spiral Stakes lacks star power, it is the most evenly matched and deepest field of the three mediocre preps going this weekend.  Terrific betting race in that chaos is likely to ensue as dirt and synthetic types come together to do battle.  I don’t see Derby implications here but it will be a great race to watch.

On Sunday, the race that Mine that Bird made famous, the Sunland Derby, will feature the 2011 debut of Astrology.  He hasn’t run since November, is completely suspect with too much to do too late and will be over bet here. So, value is created elsewhere in this race that is missing a pace.   Trainer Bob Baffert makes routinely successful assaults on this track and his weapon of choice this year is the lone-speed candidate, Sinai.  That speed will be enhanced as blinkers go back on.  Question is distance.

Will Mucho Macho Man and Astrology disappoint as predicted?  Will an upstart Derby contender move to the forefront?  Stay tuned racing fans as the exciting details unfold this weekend.

Notes: Mucho Macho Man and Pants On Fire comprise the only speed.  Pants on Fire will set the pace and make Mucho Macho Man work hard early. Stablemate Nacho Business will stalk that pair and leverage the 1 1/8 distance for a late pounce for the win.

Notes: Great betting race in that chaos seems likely.  Evenly matched field though subpar and I don’t see any of these advancing to the Kentucky Derby field.

Energy Distribution Profile of Field: Dominated by Off-the-Pace and Closers

Notes: Complete lack of speed in this one favors Sinai and that one will be extra sharp early with blinkers back on.  Distance remains a question.  Astrology looks the type to disappoint here at low odds.  Making his first start of the year and it’s almost April.  Doesn’t have the look of one ready to do battle in the Kentucky Derby.

Come back to this blog Tuesday and we’ll take a look at these preps to see if trips, biases and pace/speed rating outcomes will alter our HRN SUPER SCREENER QUALITY RATING.

Want a great tip?  Now you can get your own OTB network in your home!  Get 80 racetrack live channels, plus TVG, HRTV and 120 Dish channels for under $80 per month!  Just ask for Racetrack Television and America's Top 120.  Click here for more info!