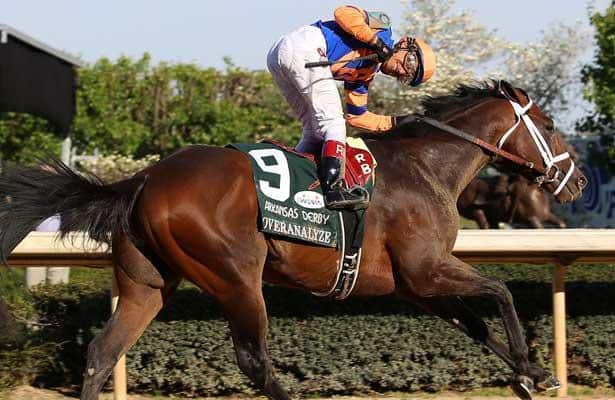 Though the final major preps were certainly entertaining to watch and produced excellent wagering opportunities, the top finishers in each race will likely have little to no impact on the outcome of the Kentucky Derby. This is particularly true for the Arkansas Derby.

Each of the final major prep races was rather “formful” with the exception of the turn-around performance by Frac Daddy as he finished a game second at huge odds in the Arkansas Derby.  The Blue Grass Stakes field was very competitive, but in the end, the second and third choices finished one-two.

Let’s look at “how” the winners of each race ran their final preps and what that foretells regarding their prospects for an “in the Superfecta” performance come the first Saturday in May.

First up, Java’s War, winner of the Blue Grass Stakes.

Did Java’s War break poorly at the start of the Blue Grass Stakes or is that just the way he breaks in his races?  He broke last in the Tampa Bay Derby and going back to his Kentucky Jockey Club race the commentary states “broke slow”.  So, you know he’ll come running late in the Kentucky Derby as stamina is no question, but with what now appears to be a moderate Derby pace, count on nothing more than a bump up, bottom-of-the-Superfecta finish at odds far less attractive than what other one-run closers will offer.

Let’s move on to the Arkansas Derby which, in my opinion, was one of the least significant of the final prep races. The winner, Overanalyze, out of the Todd Pletcher barn, redeemed himself after a rather disappointing, even effort in the Gotham stakes. He has every right to move forward going into the Kentucky Derby but he’ll need to take a big step forward to get anywhere close to his impressive Futurity and Remsen victories.

Overanalyze produced a very similar BRIS Pace and Speed Rating line to that of the 2010 Kentucky Derby winner, Super Saver, in his Arkansas Derby prep.  But that 2010 three year-old crop was particularly weak and there are far too many others coming into this year’s Kentucky Derby that have submitted superior preps.