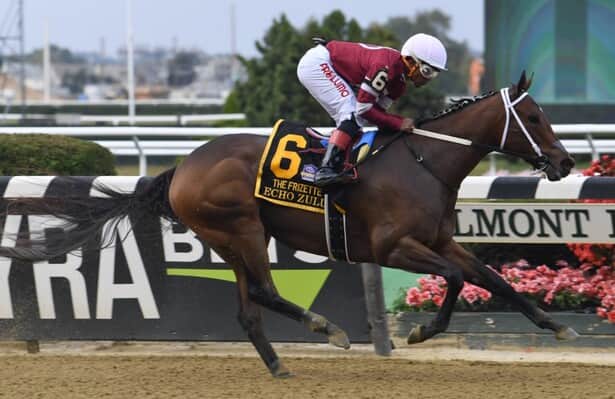 Today’s edition of HorseCenter will be in blog form due to circumstances which prevented video production this week. However, your co-hosts Brian Zipse and Matt Shifman wanted to make sure that you could get their picks and favorite wagers for the 2021 Breeders’ Cup.

In this show, the guys cover the five races for 2-year-olds on Future Stars Friday. Check back here tomorrow for Matt and Brian’s analysis of the Saturday’s nine Breeders’ Cup races. As always, thanks for coming to HorseCenter.

Brian’s Top Choice - Averly Jane - Wesley Ward-trained filly has proven herself on any surface at any track. She looks like a sprinting freak.

Brian’s second choice - Armor - Experienced English-bred from the barn of Richard Hannon looks like the most likely of all the Europeans.

Matt’s top choice - Averly Jane – This filly is fast. She was an open-length winner of her three dirt races and then her turf debut at Keeneland last month.

Matt’s second choice – Derrynane – It would be great if Christophe Clement could get his first Breeders’ Cup win this year. On a firm Woodbine turf course, Derrynane won a fast race with a big closing move. Joel Rosario is the best jockey in the world in turf sprints.

Brian’s top choice - Echo Zulu - Hard to look past the favorite, who has dominated her competition in all three starts, including last two in Grade 1 races.

Brian’s second choice - Hidden Connection - The way she won her first two has me believing that the daughter of Connect is the biggest threat to the heavy favorite.

Brian’s Top Choice - Haughty - Chad Brown-trained filly has impressed in first two starts. She should only get better with experience.

Brian’s second choice - Cairo Memories - California-based filly has taken over her races with an impressive turn of foot and has a win over the course.

Matt’s Second Choice – Haughty – Chad Brown has been winning big races throughout September and October and this filly is 10-1 on the morning line.

Brian’s Top Choice - Oviatt Class - With plenty of speed to set the table, I believe this improving son of Bernardini has a real shot to run by them all at big odds.

Brian’s Second Choice - Commandperformance - While I am not crazy for his low morning line odds, I think this maiden is going to be a good one and also should come running.

Matt’s Second Choice – Pinehurst – I like the rider change to John Velazquez who just might sit a stalking trip on this other Bob Baffert runner.

Brian’s Top Choice - Albahr - Dettori is in the irons again after an impressive North American debut, winning in style in the Grade 1 Summer Stakes at Woodbine.

Brian’s Second Choice - Modern Games - Like the top pick, he is trained by Charlie Appleby and has plenty of class. Dubawi colt is getting better with every start.

Matt’s Top Choice – Albahr – Four wins in a row for this Charlie Appleby and Godolphin runner who impressed in the Summer (G1) at Woodbine.

Matt’s Second Choice – Modern Games – From the same connections as the top choice, this guy just won a Group 3 at Newmarket.