The Maktoums: From Bedouins to Billionaires 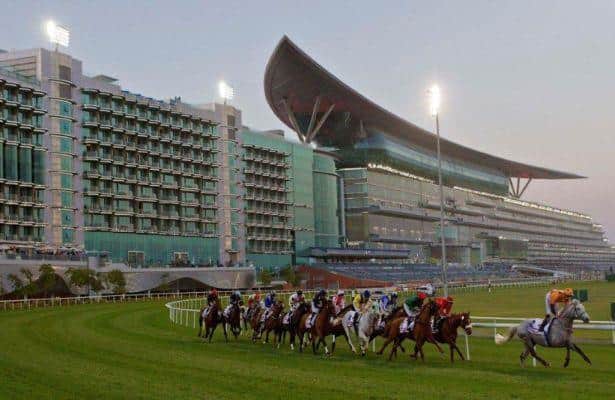 Time does not wait in Dubai. It is an impatient measure of what is immediately past and what is going to happen next. And so it is for Sheikh Mohammed bin Rashid al Maktoum who dreamt the same dreams of his father, Sheikh Rashid…the dream of transforming Dubai from a sleepy seaport dependent on pearling into an international trading center sustaining his people into the future. Yet this Sheikh doesn’t just conjur; he plans and executes. He hires the brightest of talent and expects the best in performance. He operates, in part, from OPM (other people’s money)…investment dollars. And like any dream that requires a kind of myopia with the reality of investments amid world fiscal meltdowns and international terrorism, Sheikh Mohammed never wavered from his vision of Dubai. Much like the racehorse in flight, he grabs the bit and charges forward.

Of the things that Sheikh Mohammed treasures beyond Dubai’s future are his children and his horses. For this is a determined man, a champion endurance rider himself, who has consistently infused the pockets of bluegrass breeders at the Keeneland and Fasig-Tipton auctions in his quest for the Kentucky Derby roses and Breeders' Cup glory. The Maktoum brothers first set their sights on American bloodstock in 1980, spending $2.45 mil on primarily the Northern Dancer line (Levin/2002). “The Dancer” had been a relatively smallish colt but had proven heart and stamina on the American track in the 60s. As a sire, his progeny had proved adept on all track surfaces, particularly grass, which was the European, Asian and Australian surface of choice. The Dubai entourage was just getting warmed up when in ‘84 they spent close to $42 mil setting a record for single day sales at Fasig-Tipton. Continuing to make purchases into the present day with his majib, led by John Ferguson and some of the finest bloodstock minds in the racing industry, they are a force in international racing. Of note is the fact that 1980 was not the first sale attended by “Sheikh Mo” in Lexington. The previous year he flew commercially into Lexington incognito. Upon arrival he discovered that the area’s hotels were booked to capacity and ended up staying at a small motel down the road from Keeneland. The next morning, dressed to blend in, he hovered in the back of the sales theatre, careful not to draw the attention of the Irish bloodstock agents from the Curragh that might recognize him from British stakes racing where the Maktoum brothers had been making their mark (Wilson/2006).

What is unique about the Maktoum mentality is that they consider any loss as a lesson and a factor in the next victory….something to build upon. While their Bedouin family lineage of the Bani Yas tribe stretches over thousands of years equal to the history of the famed Arabian desert horse, the progenitor of today’s thoroughbred, the Maktoums have their collective feet planted firmly in the 21rst century. Darley and Shadwell farms and racing team honor the origin of the international thoroughbred: Darley to commemorate the Darley Arabian from Yemen and Godolphin Racing to recognize the Godolphin Barb foaled in Syria (Levin/2002). The Dubai World Cup, inaugurated in 1996 and won by the American legend, Cigar, was conceived as a tribute…a desert Nabati poem to the God gift of the horse. It is the richest horse race on the planet.

The link between the Arabian horse and the modern thoroughbred has been substantially documented by dated English stud registries. Even though over 103 stallions of oriental descent were registered in the General Stud, the blood from those pedigrees became obliterated by 1850 (Wilson/2006).There were only three that remained evidenced in racing stock and continue today: the Godolphin Barb (acquired by Lord Godolphin), the Byerley Turk first recorded as a cavalry mount in the siege of Vienna for a Captain Byerley in 1683 and the Darley Arabian, purchased in 1703 by the British Consul in Syria, Thomas Darley, as a gift for his brother, Richard (Wilson/2006).

Taught to ride at the age of 12, Sheikh Mohammed grew up with a love of horses, often sharing his bagged lunch with one of his father’s thoroughbreds on his way to school. As a student at Cambridge, he boarded with family friends whom were involved in racing in the UK learning the finer points of confirmation, training and race riding. He studied sire pedigrees yet he also he came to realize that the tail line, the dam line, could prove dominant for stamina, a characteristic that he valued as important as speed. He was an endurance rider, after all. 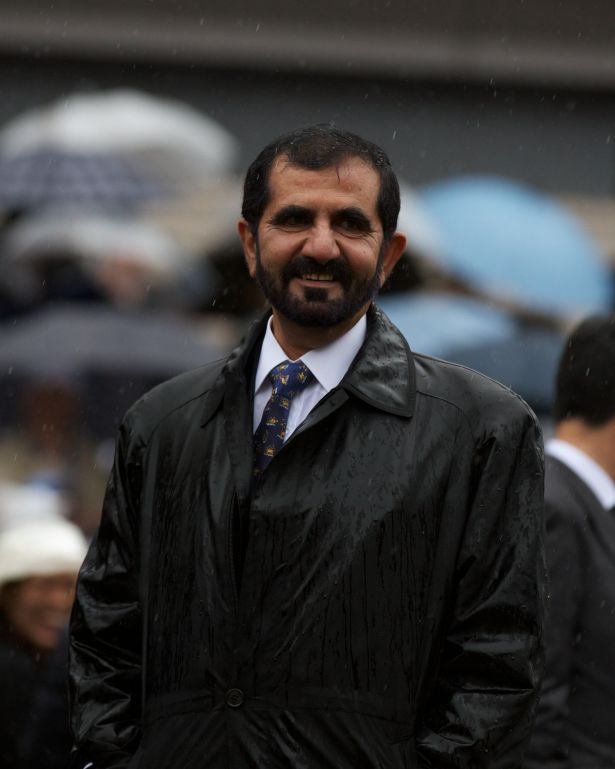 Sheikh Mohammed and his brother, the elder Sheikh Hamdan have succeeded against impossible odds. World-wide, their Emirates Airlines, helmed by Sheikh Hamdan have become the most recognizable sponsors of stakes racing in the US, Australia, the UK, South Africa and Hong Kong, sustaining racing in Western alliance countries post 9-11 when there was a creeping antipathy for anything Muslim.

The day that changed the world had implications for the Maktoums and the other Sheikdoms that make up the United Arab Emirates and the other Peninsula states. The provinces of the UAE sit on the border of Saudi Arabia separated from Iran by the Persian Gulf. Primarily Sunni by sect, extreme Islamist propaganda has been prohibited in Dubai and other religions are accepted and their churches and temples encouraged to be built. In fact there seems to be an aura of secular tolerance within Dubai as the Maktoums behave in accordance to their Muslim heritage yet think in terms of globalism. As oil represents roughly only 9% of their GNP (Cooke/2014), Dubai is dependent on international trade, foreign investments and tourism, all three factors that have seen remarkable growth in the past fifty years. To understand the concept of the then and the now is to grasp the fact that there was no electricity in Dubai until 1968. Dubai’s land mass is slightly less than total square mileage of Houston, Texas. Dreams and concepts litter the global corporate landscape because often a foreign location cannot supply the infra-structure required to attract international business. Sheikh Mo and his brothers, Maktoum and Hamdan recognized this. They tackled the electrical grid system, water salination and re-built the harbors, allowing for massive cargo ships to come and go. Universities were built in conjunction with Harvard and now, Columbia University, as well as online learning platforms for both men and women; moreover it was free to locals. E Dubai, his stakes winning colt was named for Dubai’s technological park also called eDubai (now called Internet City), a trade free zone that housed Cisco, Microsoft, Sony, Logica, Dell among the other international purveyors of wired wizardry (Wilson/2006). From a seaport that was populated by pearl divers in the 1920’s, the brothers built their father’s dream of a destination ‘brand’ for tourism and capitalism. And for Sheikh Mohammed, the Dubai World Cup was the ideal vehicle to remind the world of thoroughbred origins and televise their astounding growth. It was, after all, his passion.

Sheikh Mohammed was among the buyers at the Fasig-Tipton yearling sale on Tuesday September 11, 2001 in Lexington, Kentucky and was present when Keeneland President Nick Nicholson requested a moment of silence and sale postponement followed by an announcement of the formation of a relief fund. He was present at Wednesday bidding, much to the relief of the Kentucky breeders and consignors, waiting until Thursday when the American air-space was re-opened to head home. While still in the air, Sheikh Mohammed personally and very quietly donated $15 mil to the Keeneland Relief Fund through his associate, John Ferguson.

The Emirates Airlines sponsorship of several of the 2001 Breeders’ Cup races continued six weeks later in Elmont, New York, mere miles from the tragedy of 9-11. Sensitive to the understandable rancor of the American public, the Maktoum brothers watched the races by satellite from Dubai.

From a distance out at sea, the Burj al Arab appears as a monolithic sparkling sail. Billowing skyward, it is considered to be the most innovative architectural structure in the world only eclipsed by another of Dubai’s wonders, the Burj Khalifa, the needle-like hotel which currently holds the record for world’s tallest building. Both are audacious symbols of capitalism rising from the Middle East. The former hotel looks like a sail, yet the developers of the Burj drew their inspiration from “a figure fitted with a kandura (a long robe garment) and gutra tied with a egal (headscarf with a rope to keep it in place ) (Mitchell/2007). To capture the essence of Dubai is to understand that the tribal tradition lives intertwined with the multi-cultural demands of the digital age much like a braid being woven from multiple strands of hair (Roth/2012). Rarely seen in anything but native kandura, the Maktoums do observe the traditions of the dress code of the Royal enclosure at Ascot with their top hats and requisite tail coats.

Sheikh Mohammed is the third son of the original visionary, the late Sheikh Rashid bin Saeed al Maktoum and succeeded his father upon his death at 78  as the autocratic ruler. The ruling family of Dubai is not a traditional monarchy in the fashion of the Windsors or the royal houses of Scandinavia and Jordan. Within tribal hierarchies, the eldest son does not automatically succeed the father. They are not referred to as ‘kings’ but rulers. While alive Rashid the father had appointed Mohammed, his son, as Crown Prince to clearly establish Sheikh “Mo”s right to succession. Yet all of the four Maktoum brothers took advantage of familial expertise and formed their intra-family majid, or council. Mohammed is, therefore, not a king…yet he is a ruler in every sense of the word as opposed to the Windsors whom are titled and privileged yet powerless. The Maktoums are primarily anglophiles; all have been educated at English boarding schools, Sandhurst, Mons Military, Cambridge University and in the present Crown Prince Hamdan Rashid’s case, the London School of Economics (Wikipedia/2016). As a rule, English is their second language. Yet the Maktoum’s have also forged an alliance with America.

"The UAE and America have long been allies and partners, in development and trade as well as diplomacy and defense. It is clearly an important relationship for both countries that is cemented on a long history of goodwill and mutual understanding and most importantly, trust."

One is struck by the Maktoum adherence to an almost Arthurian principle of establishing a utilitarian, “the greatest good for the greatest number of people” environment yet ascribing to a monarchist rule. It is Camelot in the sand; yet the more civilized tribes of Arabia have always, when they last past a despot, believe in a benevolent hierarchy. King Arthur while having historical models was a myth. And while skeptics argue that Dubai is more mirage than certainty, the Maktoums continue to realize progress.

"I have no clue who invented the word ‘impossible’, but it is clearly someone looking for an easy life."

Artwork courtesy of A.E. Sabo (Off the Pace)

Maktoum, Mohammed (2015) Flashes of Thought: Lessons in Life & Leadership by the Man behind Dubai

Wilson. Graeme (2006) Rashid’s Legacy: The Genesis of the Maktoum Family and the History of Dubai

Levin,Jason (2002) From the Desert to the Derby