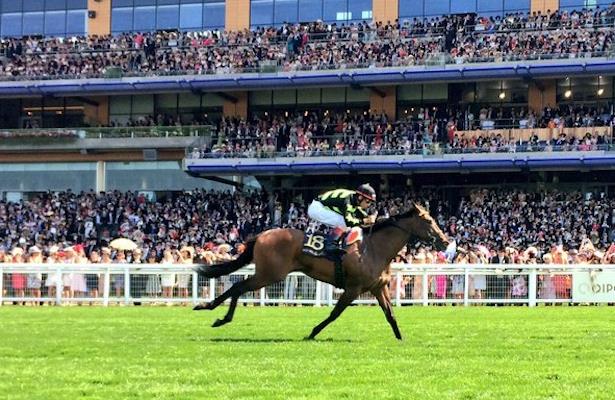 American dirt bred horses are not supposed to win at Royal Ascot. Evidently, no one told the Wesley Ward trainee, Lady Aurelia. The Stonestreet-bred filly competed last year in the The Queen Mary Stakes for 2 year-old fillies and put on an incredible display of athleticism.

After going through Stonestreet’s training program in Ocala, Florida, she was purchased at the Keeneland September sale as a yearling by frequent Stonestreet partner George Bolton and Peter Liedel, Stonestreet retained an interest in the filly. The Scat Daddy filly was sent to Wesley Ward for training. After a slow start, Ward realized he had something very special. At first he breezed her with other fillies but as soon as she began gate training, she was an eye opener. Her debut was at Keeneland  where she beat five other juveniles by 7 ½ lengths, in track record time. From there, she flew to England where she proclaimed her brilliance in the Queen Mary Stakes. Ridden by Frankie Dettori, she embarrassed her 16 opponents with a race for the ages. The Racing Post described her run as “One of the most devastating displays seen in modern times at Royal Ascot.”

After a short break,  Lady Aurelia added more frequent flier miles by flying to France. She was entered in the Group 1 Prix Morny at Deauville Racecourse and went off as the favorite. She hit two bad patches of ground which made her lose her momentum. Nevertheless, she won by 1 length. Her jockey, Dettori, remarked afterwards,“She should have won by 3 lengths if it were not for those bad patches of ground... with a sound surface she would have skipped right away.” Lady Aurelia traveled back to England and raced at Newmarket in the Group 1 Cheveley Park Stakes. Again, she went off as the favorite. She cleared the field until she came under pressure approaching the final furlong and ended up coming in third behind Brave Anna and Roly Poly. Ward was puzzled by her performance and when the vet scoped her after the race, they discovered she had bled. She was awarded for her astounding performances as Champion Two-Year-Old Filly with only the second Cartier award to be given to a horse trained outside of Europe (the first went to the Australian, Black Caviar).

After a long break, The Lady made her three-year-old debut at Keeneland April 15, 2017, in the Giant’s Causeway Stakes where she drove clear by 2 ½ lengths. I arrived at Keeneland June 1st, hoping to see Lady Aurelia but she was in quarantine, awaiting travel to England. So I did the next best thing. I saw her dam, D’Wildcat Speed, a beautiful bay who had a foal by Munnings by her side. Stonestreet was very high on the foal’s prospects. Could we have another progeny in a few years?

Our Lady’s usual European rider, Frankie Dettorri was incapacitated with a hurt shoulder so John Velasquez, who had ridden her in the Giant’s Causeway, was on board for the filly’s return to Royal Ascot in the Group 1 King’s Stand Stakes. This time she’d be running against her elders including some colts. She was taking a big step up before the champagne drinking dapper guests and the Queen of England, Lady Aurelia, competing against nine other horses. This time, instead of taking the lead, The Lady ran mid-pack and slowly took the lead. “It’s Lady Aurelia who’s let go now by Johnny Velasquez and she's scorching the Ascot turf!” “Lady Aurelia where were the rest?!”

After the race, Wesley Ward said she was a once in a lifetime horse. She ran 1/100th of a second off the track record. Who can now say American horses cannot compete in Europe?

Meet Mary Dixon Reynolds
Mary Dixon Reynolds passion for horses began at an early age. She grew up riding, showing and training Arabians. The great Curlin brought her into horse racing and the celebrated filly, Rachel Alexandra, solidified her love of the sport. The amateur handicapper found beginner's luck during her first outing to a racetrack at Colonial Downs near Richmond, Va.