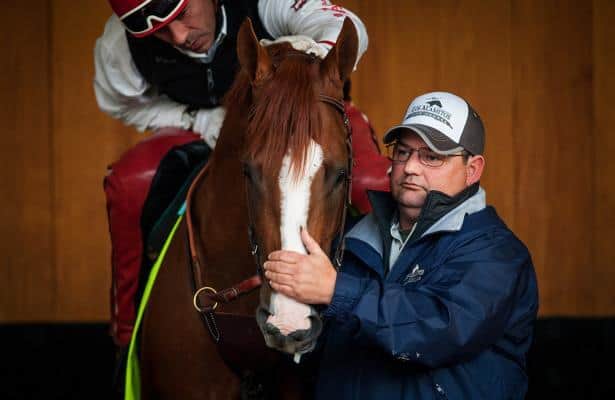 Duncan Taylor, president and CEO of Taylor Made, said Monday that the two-time Horse of the Year California Chrome is expected to make his way from Kentucky to his new home, Japan, sometime around Jan. 6-7.

And he'll have a familiar guide during his travels.

"Well, we had Alan Sherman working for us during the Keeneland Fall Sale," Taylor said.

Of course, Sherman, the assistant to his father and California Chrome's trainer, Art Sherman, often led Chrome on road trips during his racing days.

"I couldn't think of a better person to accompany the horse," Taylor said. "They know each other so well and had traveled all over the world together. I asked, and Alan said yes."

RELATED: Chrome's new owner says 'we promise to take care of him'

California Chrome, who won the Kentucky Derby, Preakness Stakes and Dubai World Cup, among other Grade 1 events during his career, will see his first crop of runners hit the track next year in the U.S.

It has been a big year for former American racehorses heading to Japan. California Chrome is joining the likes of Horse of the Year favorite Bricks and Mortar; another Derby-Dubai winner Animal Kingdom; and New Year's Day, sire of Maximum Security.

Sherman told me there will be no other horses on California Chrome's special flight overseas. He's looking forward to spending time with an old friend.

I also asked Sherman if he'd play his "hat trick" with Chrome, who was wont to grab them right off Sherman's head.