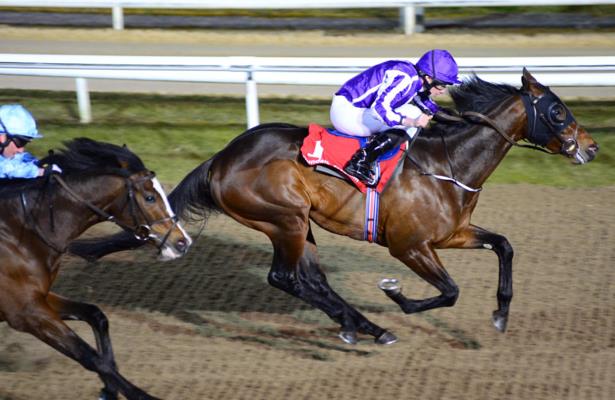 One of the racing community's most-anticipated weekends of the year includes the Dubai World Cup night at Meydan, the richest race card of the year, and pairs quite well with Gulfstream Park's Florida Derby program.

With Easter falling on Sunday, only four tracks will be in action then.

Here's a rundown of the major races, with all given times in Eastern Standard. Looking to place a bet? Sign up for a TVG account to receive $20 instantly, then double your first deposit up to $75!

The road to the Kentucky Derby and Kentucky Oaks goes international this weekend. The Burradon Stakes at Newcastle in England drew a field of 10 led by Gronkowski, who is undefeated in three starts on synthetics. This race went to post Friday morning, and “Gronk” kept his streak alive with a gritty win. Iconic Sunset was second, Dark Acclaim was third, and Purser was fourth. Points for this race were offered on a 30-12-6-3 scale.

From England, the trail winds east with a stop at Meydan in the United Arab Emirates. The Group 2 UAE Derby drew a field of nine. Gold Town was installed as the 6-5 morning line favorite off his victory in the UAE Two Thousand Guineas (G3). Mendelssohn, half-brother to champion Beholder, is the 5-2 second choice. He won the Breeders’ Cup Juvenile Turf (G1) to conclude his 2017 campaign and triumphed in the 32red Patton Stakes, also a Kentucky Derby points race, to begin 2018. Reride, who most recently won the Mine That Bird Derby, is the only American in the race. Because it is technically part of the American Road to the Derby, the UAE Derby will award points on a 100-40-20-10 basis.

Back in the U.S., Gulfstream Park hosts the Grade 2 Gulfstream Park Oaks and the Grade 1 Florida Derby. The Oaks drew a field of 13 headed by Take Charge Paula. The Kiaran McLaughlin trainee won the Forward Gal (G3) before running second in the Davona Dale (G2). Third place finisher Heavenhasmynikki will try again for a graded stakes victory and a shot at the Kentucky Oaks. The Suncoast at Tampa Bay produced several Oaks starters, with the first through third and fifth place finishers lining up to take a shot at “Paula.”

West Coast has been installed as the 4-5 favorite in the Group 1 Dubai World Cup, the world’s second richest horse race, off his runner-up finish to Gun Runner in the Pegasus World Cup Invitational, the current richest horse race in the world. He is joined in the race by fellow Americans Gunnevera, Forever Unbridled, Mubtaahij and Pavel.

Economic Model is the lone U.S. runner in the Group 2 Godolphin Mile. He is the 7-2 second betting choice behind favored Heavy Metal, who has been based at Meydan for some time now.

Stormy Liberal, Holding Gold, Richard’s Boy, and Conquest Tsunami will all contest the Group 1 Al Quoz Sprint. All four of our runners are longshots with Conquest Tsunami being the best regarded of the bunch at 15-1 on the morning line. Meydan Sprint (G2) runner-up Blue Point is the 4-5 favorite but will have his work cut out for him in breaking from post 13.

Top dirt sprinters Mind Your Biscuits, X Y Jet, and Roy H will face off in the Group 1 Dubai Golden Shaheen, with Roy H garnering 4-5 favoritism. X Y Jet was tabbed at 5-2 with Mind Your Biscuits the third choice at 4-1. This race is ours to lose with the other six in the field posted at double digit odds. There’s no reason for this to not be an American trifecta.

Always Dreaming, last year’s Kentucky Derby winner, makes his 2018 debut Saturday in the Grade 2 Gulfstream Park Hardacre Mile. This will be his first start since running a disappointing ninth in the Travers (G1). He was found to have a bad case of ulcers following that poor showing, which resulted in this seven month layoff. The Bodemeister colt is a perfect two-for-two at Gulfstream Park, and post two suits his front-running style. Irish War Cry will be his main competitor in the six-horse field, but Tommy Macho is likely to run a big race off his Fred Hooper (G3) victory in January and has never been out of the trifecta at Gulfstream.

The one-mile, Grade 3 Honey Fox Stakes, to be contested on the lawn, drew a field of 10 headed by Lull, who steps down in class off a fifth-place finish in the Matriarch (G1) to conclude her 2017 campaign. Challenging her for top billing is On Leave, who won the My Charmer (G3) here at Gulfstream back in mid-December. Both of those ladies will be making their respective 2018 debuts.

When Sadler’s Joy enters the gate Saturday, not only will he be seeking to defend his Grade 2 Pan American Stakes title, he will also be looking to join a select cast of those that have won the race twice. Only four have won the race twice, and of those four, two did so in back-to-back years. Sadler’s Joy has been installed as the 2-1 favorite. Also of note in the field are Bullards Alley, Hi Happy, and Bigger Picture.