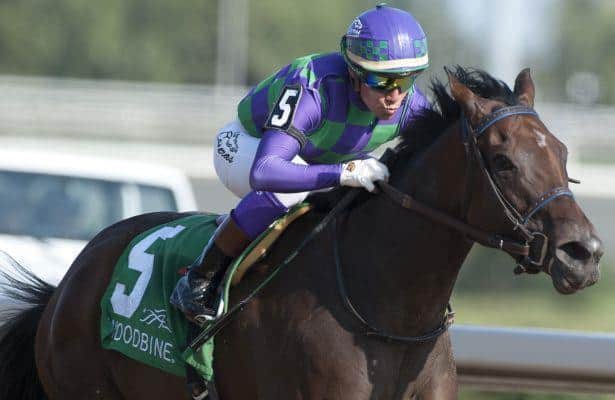 Each weekend, Horse Racing Nation previews the top races to tune into coast to coast and runs down the main contenders. Post times are all in Eastern Time. This edition covers Sunday’s and Monday’s races.

This horse may represent more than a comedic name, as a play on a typo of a tweet sent by President Donald Trump. We're hearing she could also be Brad Cox's big filly of this current 2-year-old crop. The $250,000 LNJ Foxwoods purchase goes postward for the first time Sunday at Churchill Downs, where she's the 5-2 morning line favorite facing 10 rivals in Race 7. Post time is 3:48 p.m. ET. Cox, who also trains Monomoy Girl, the Kentucky Oaks winner, has breezed the daughter of Into Mischief three times from the gate. The big question: How will Churchill track announcer Travis Stone pronounce Covfefe?

La Pelosa versus My Gal Betty in the Natalma

Woodbine's Grade 1 Natalma Stakes, a one-mile turf race at Woodbine for 2-year old fillies, drew a full field of fourteen led by group three placed La Pelosa and My Gal Betty. La Pelosa was second in both the Albany (G3) at Ascot and the Sweet Solera (G3) at Newmarket and will be making her North American debut. Meanwhile My Gal Betty has raced exclusively at Woodbine, and while she has crossed the line first in each start, she was disqualified to third in the My Dear Stakes in July. Also being given solid shots despite the stretch out in distance for most is stakes winner Stillwater Cove, stakes placed Mintd (IRE), and impressive maiden winner Artilena. The winner will also receive a fees paid berth to the Breeders’ Cup Juvenile Fillies Turf. Post time is 4:26 p.m.

Chad Brown-trained Fog of War is the 5-2 favorite to annex the Grade 1 Summer Stakes, a one mile turf race for 2-year olds also at Woodbine, off a nice closing debut victory at Saratoga in August. The War Front colt will break from post three, and right to his inside is speedy second choice Avie’s Flatter, another debut winner. Tricky Magician has not yet found the winner’s circle in three career starts, but the son of Magician has been competitive in each race and has never been worse than third. The field also includes other stakes winners and will go to post at 5:30 p.m. The winner will receive a fees paid berth to the Breeders' Cup Juvenile Turf.

The Grade 2 Presque Isle Downs Masters Stakes attracted a full field and then some despite its place on a Monday card. Hotshot Anna enters on a three race win streak and will break from post nine as your likely favorite. Last year’s Masters winner, Ami’s Mesa, will attempt to defend her title but has just one start this year after a heartbreaking loss in last year’s Breeders’ Cup Filly & Mare Sprint. Back in April, Ami’s Mesa was a late gaining, close up sixth in the Madison (G1). Allowance winner Browse will make her first start on an all-weather surface while Seaway (G3) winner Code Warrior will ship in from Woodbine. Post time is 7:40 p.m.