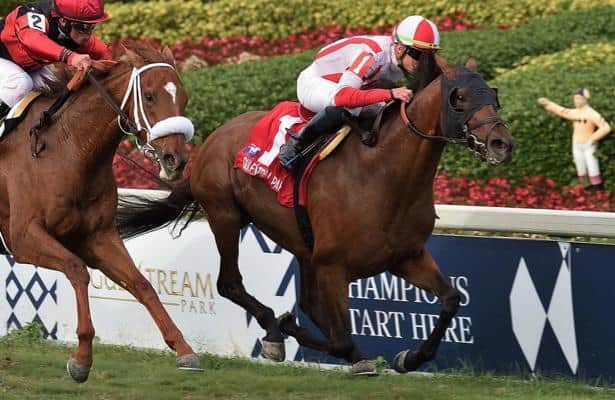 The Grade 3 Eatontown Stakes attracted a field of just six, with local standout Valedictorian break from the rail, giving the Kelly Breen trainee a perfect setup to nab the lead and set the pace. The Chad Brown invader Inflexibility meanwhile drew the far outside post and should be ready to roll off a good effort in her season debut last month. Those are the two to beat, while four other fillies and mares fill out an otherwise evenly matched field.

Charles Town Classic (G2) winner Runnin’toluvya will put his 10-race streak on the line and take his show on the road when stepping back up in class for the Grade 3 Philip H. Iselin Stakes off a win in state-bred allowance company. This makes for a Classic rematch with Diamond King, the runner-up last time who earned morning line favoritism in this spot. Salvatore Mile (G3) third-place finisher Bal Harbour will break from the rail and could challenge the Top 2.

Two Triple Crown race alumni top the Grade 3 Ohio Derby. The Preakness Stakes' third-place finisher Owendale has been tabbed as the 9-5 favorite, with the Brad Cox trainee a winner of the Lexington Stakes (G3) two back. Second choice Long Range Toddy will be making his first start since a troubled trip in the Kentucky Derby. His two worst races -- also his last two races -- were run in the slop. Trainer Steve Asmussen expects his colt to contend on a dry track. The morning line third choice Global Campaign will scratch due to a quarter crack, leaving a field of six going 1 1/8 miles.

Imagine pointing your filly to an overnight stakes, only to find out that she has to face last out graded winners Covfefe and Mia Mischief. That's what connections of eight others are dealing with for the Roxelana Overnight Stakes. Covfefe, the slight morning line favorite, enters off a record-setting win in the Miss Preakness (G3) when she covered six furlongs in 1:07.70. This time, she'll face older foes, including Mia Mischief, who's taking an even bigger class drop after a victory in the Humana Distaff (G1). The heavy favorites are just that for a reason. However, look for Winning Colors (G3) heroine Funny Bunny to make some noise at a much better price.

Mommouth’s Saturday feature is also the weekend's lone Grade 1 race, with the United Nations Stakes attracting a field of eight. Chad Brown’s Focus Group leads the field at 2-1 on the morning line. Though most recently a disappointing sixth in the Man o' War, the 5-year old son of Kitten’s Joy did win the Pan American (G2) to begin his 2019 season. Elkhorn (G2) winner Bigger Picture breaks from the rail as the second choice. He's also a previous United Nations winner running in this race for the fourth time. Fellow turf routers Channel Cat and Zulu Alpha will keep the odds competitive for bettors.

My Miss Lilly drops into the Lady’s Secret off a poor showing in the Dupont Distaff (G3) and is the lukewarm morning line favorite. The field includes graded stakes-placed Pink Sands, stakes-placed Coffee Crush and recent allowance winner Alberobello. The pace should not be too crazy, giving Coffee Crush or Alberobello a good opportunity to take the field wire to wire.

Storm the Hill is the tepid morning line choice in the Grade 3 Wilshire Stakes. The 5-year old mare most recently won the Senator K Maddy (G3). Ollie’s Candy shook the rust off in the Gamely (G1) and is a must play if her odds hover around her 5-1 morning line odds in her second start for the John Sadler barn. All in all, this is a nicely matched field of 1, so bettors should be able to catch some solid payouts.

Sharp Samurai and River Boyne square off in the Grade 3 American Stakes at one mile on the turf. Both are searching for their first victory in 2019. Sharp Samurai is making his second start off the layoff, while River Boyne has a pair of seconds and fourths so far this year. Both are quite adept at the one-mile distance. If you’re looking for a bit of price, Bombard is the way to go. He has three runner-up finishes at this distance and gains the services of Flavien Prat.

If you’re not sure what to do with the Grade 3 San Juan Capistrano, then you’re in good company. Carded at a distance rarely seen, 1 3/4 miles, this race attracted turf and dirt runners alike. Aside from no one having previously tried this distance, there are also starters who have never even won on turf. With all the unknowns in this race, I like the mare Causeforcommotion the best. She’s long-winded and dropping out of a tougher spot.