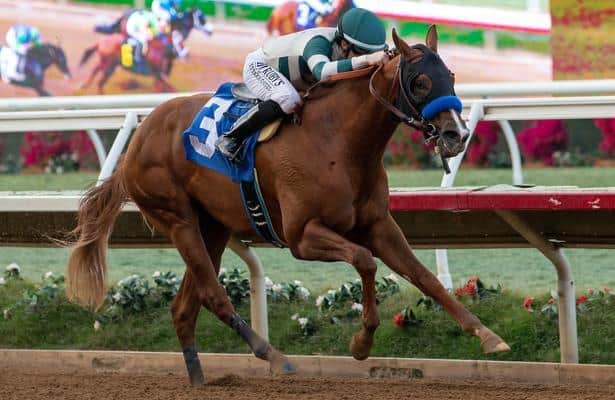 Seven to contend for points in Withers

With neither of the top two Remsen (G2) finishers back in the Withers Stakes (G3) at Aqueduct, Tax will attempt to turn a Remsen show into a Withers win. The Arch gelding tried to stay with winner Maximus Mischief but could not keep up in the 1 1/8-mile contest on Dec. 1 and was ultimately passed for second. Like Tax, Moretti, a half-brother to Battle of Midway, already has experience at the Withers distance; however, the son of Medaglia d’Oro took home the win while breaking his maiden. That race was also at Aqueduct, making the Todd Pletcher trainee look like a solid choice. Lucky Lee ships in from Pennsylvania to make his graded debut. He earned a good Equibase figure in his last start but will have to bring his “A” game for the step up in class. Not That Brady exits state-bred company to try his luck on the Derby trail, and maybe a win by Not That Brady may precede another Super Bowl win for that Brady. Post time is 4:30 p.m.

While the northern half of the country gets pounded with more snow, the South has been getting rain. For Gulfstream Park’s trio of graded stakes, that means running in the slop. Several in the Forward Gal Stakes (G3) have wet track experience, including Hollywood Glory who enters off three straight off turf races. For the two that went off on a wet track, the filly ran second. Fashion Faux Pas easily won the Sandpiper Stakes on a sloppy track at Tampa Bay. At 4-1 on the morning line, she could be a steal. Favored Feedback is making her first start since convincingly breaking her maiden in August. How she handles the surface will be key.

Saratoga Special (G2) winner Call Paul heads the Grade 3 Swale Stakes. The Friesan Fire colt has never been worse than third, including a show placing in the one mile Champagne (G1). High Crime was a sharp maiden winner at Gulfstream in January, breaking on top and sprinting away to a nearly eight length victory. Seismic Jolt has been undefeated since switching to dirt. Both of those races were in restricted company, but he looked quite good regardless. Despite being parked in post 11, Country Singer is another with a good shot, but he could end up being part of a contentious pace.

Kentucky Derby points are on the line in the Holy Bull Stakes (G2). Maximus Mischief is the even money favorite to make his 2019 bow a winning one. While he has never faced an off track, he has been training at Gulfstream and has a posted work in the mud. Mucho Macho Man Stakes winner Mihos will try to make it three wins in a row, while the Todd Pletcher-trained Federal Case will attempt to stay undefeated off a local allowance score.

Oaklawn Park plays host to the Martha Washington Stakes, an official Kentucky Oaks prep race. Stakes winner Sunset Wish has been installed as the 9-5 favorite in the field of seven. It will be a rematch for her and Take Charge Brandi Stakes runner-up Taylor’s Spirit, who set the pace but gave way in the stretch. Sunset Wish will likely get another favorable setup as maiden winner Marathon Queen and a couple others like to be on the lead. Post time is 5:38 p.m.

Bob Hope (G3) winner Mucho Gusto and Sham (G3) winner Gunmetal Gray will square off in the Robert B. Lewis (G3). The two colts have completely different running styles with Mucho Gusto being a pace-setter and Gunmetal Gray closing from off it. Easy Shot went off at long odds in the Sham but ended up running a close fifth. He is being given an 8-1 shot here based on that effort. John Sadler will take a shot with maiden winner Nolo Contesto for owner Hronis Racing. Points will be awarded to the Top 4 finishers towards a spot in the Derby gate in May.

McKinzie kicks off his 2019 campaign in the Grade 2 San Pasqual. The talented colt ended 2018 with a Malibu (G1) win but will most likely be looking to fill the void left by the retirements of Accelerate and City of Light in the older male division. He will face millionaire Battle of Midway who has rounded back into top form after coming out of retirement early last year. Dabster, who has finished behind Battle of Midway in their last two starts, will try to upset the top two for trainer Bob Baffert but will need to put in a career-best in order to do so. For a number of contenders, this race could serve as a springboard to the Dubai World Cup (G1).

While the colts run for Derby points at Aqueduct on Saturday, the Busanda Stakes headlines Sunday’s card. The race attracted eleven fillies with Demoiselle (G2) second and third place finishers Afleet Destiny and Filly Joel back for a rematch. Neither could get to runaway winner Positive Spirit, and Afleet Destiny edged Filly Joel by just a half length. The field does not look particularly strong, giving Always Shopping and Miss Marilyn, who exit the same maiden race, a decent shot. Post time is 4:25 p.m.

Sunday’s features are turf events in the Sunshine State

While all of Gulfstream Park’s Saturday stakes races are on the main track, the Dania Beach and the Grade 3 Sweetest Chant are both one-mile turf events. Bourbon (G3) winner Current drops in class to become the favorite in the Dania Beach. He will be returning to the turf after finishing last year with a seventh in the slop in the Kentucky Jockey Club (G2). Casa Creed looks to have found a new home on turf after winning last month’s Kitten’s Joy Stakes over Gulfstream’s turf. A Thread of Blue looks strong coming in off a front-running score in an optional claimer in December. Royal Urn also exits the Kitten’s Joy, which he the set the pace in before giving way to finish third.

Undefeated Stewart Manor Stakes winner Regal Glory tops a large field in the Sweetest Chant. The Animal Kingdom filly is trained by Chad Brown and will break from mid-pack. While Regal Glory ships in from New York, A Bit Special has home turf advantage, compiling a 4: 3-1-0 career record, all at Gulfstream, with two stakes wins. The Norm Casse trained Hard Legacy enters this race undefeated, as well, but will need to take another step forward here.