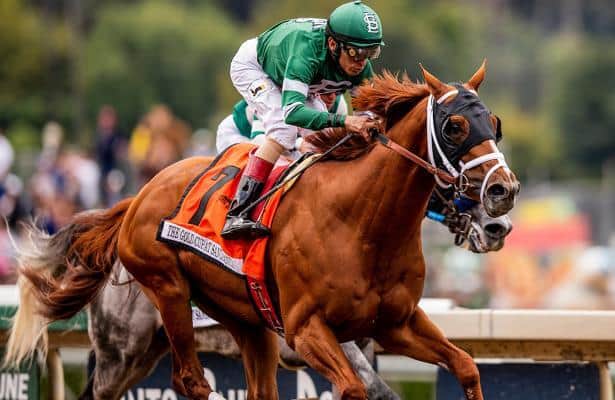 World of Trouble will test his mettle against some salty competition in the Grade 3 Troy Stakes.

A grade one winner on dirt and turf, the 4-year old stays on the latter surface off facile wins in the Turf Sprint (G2) and the Jaipur (G1).

Lining up to face him are veterans Disco Partner, who was most recently third in the Jaipur behind World of Trouble, and Pure Sensation, winner of the Parx Dash (G3) in his most recent start.

Pure Sensation will try to go with World of Trouble on the lead while Disco Partner will sit behind those two and wait for the stretch drive.

Canadian grade one winner Wet Your Whistle will get a class test now that he has started doing his best running.

It’s not a graded race, but the Lure Stakes still has the potential to be the Chad Brown show.

He will send out favored Sacred Life (FR), who will race with first time Lasix, as well as Projected and Ticonderoga.

All three are dropping into this spot off less than optimal runs in graded company in their respective last starts.

Second choice Lucullan enters off a confidence boosting allowance victory while Todd Pletcher will saddle the ever popular Gidu.

Mineshaft (G3) winner Silver Dust is the lukewarm choice on the morning line for the Grade 3 West Virginia Governor’s Stakes.

This is a very underwhelming field, but the good news, for bettors at least, is that there’s money to be made.

Only Hawaakom has a win over the track while most of the field has never raced at Mountaineer prior to this start.

This absolutely looks like a good spot for Kukulkan to get his first graded win in the U.S.

Graded stakes winner Sir Anthony will attempt to string together back-to-back victories after losing his best form for a handful of races.

There are no standouts here, so get your dart boards ready.

The Quality Road filly is making her first start since running a disappointing fifth in the Kentucky Oaks (G1) behind winner Serengeti Empress, who was most recently second to break-out star Guarana in the Acorn (G1).

The winner will eventually have to face and defeat Guarana, but for now, this spot will go a ways toward clearing up the top of the 3-year old filly division.

Mr. Money has proved unstoppable in Grade 3 company and is the 6-5 favorite to make it four wins in a row as he headlines the Grade 3 West Virginia Derby.

His biggest threat is likely Plus Que Parfait, though I believe he just really took to the Meydan track in Dubai.

Math Wizard will try Mr. Money again after running third behind him in the Indiana Derby (G3).

This does nothing to sort out the division, but it’s nice to see a well placed colt continue to be put in spots where he can win.

It’s “Win and You’re In” time for the Breeders’ Cup Classic as the winner of the Grade 1 Whitney Stakes will get a fees-paid berth in the starting gate of the World Championships feature.

It will feature a rematch between second and third place Met Mile (G1) finishers McKinzie and Thunder Snow.

Trained by Bob Baffert, McKinzie is searching for that elusive grade one win as an older runner while Thunder Snow will attempt to get his first career victory in the United States.

Vino Rosso most recently triumphed in the Gold Cup (G1) but has yet to prove that he can beat top tier runners.

New York specialist Preservationist mildly upset the Suburban (G2) in his last outing and will be looking to add to his win streak with what would be a very nice win for him.

Meanwhile Yoshida returns to the scene of his Woodward (G1) triumph from last year.

It could be that he really likes the main track at Saratoga, and I’m willing to take that risk with him sitting at 10-1 on the morning line.

Dazzling debut winner Amalfi Sunrise will get a stiff test when she faces undefeated Schuylerville (G3) winner Comical in the Grade 2 Sorrento Stakes.

Both ladies turned in a 93 Equibase speed figure in their debuts, but Comical regressed a bit in her second start, although that was on a sloppy surface at Saratoga.

Amalfi Sunrise’s stablemate Shedaresthedevil will join her in the starting gate and will need to take a big step forward to best either of the two aforementioned fillies.

The mare has not taken a wrong step lately, reeling off four consecutive victories in graded company.

Toinette is 2-for-2 at the Yellow Ribbon distance, with one of this wins coming over none other than Rushing Fall.

This will be her first start since October, so she may need to knock some rust off before we see her best again.

Valedictorian looks tough off a win in the Eatontown (G3) while Beau Recall will look to do a placing better after running second in the Just a Game (G1) last out.