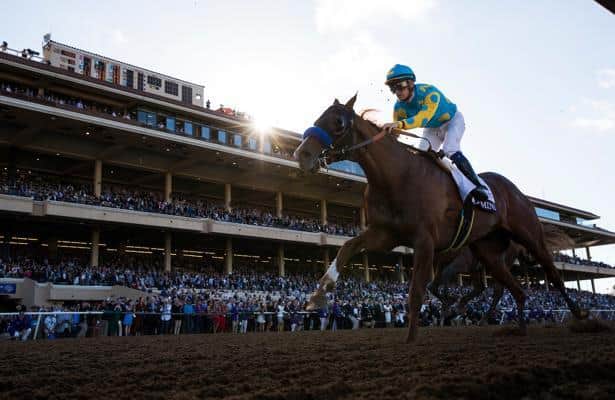 St. Patrick’s Day brings us a trio of 2018 Kentucky Derby and Oaks preps. Oaklawn Park's Rebel Stakes will offer up points on a 50-20-10-5 basis to the top four runners, while the two preps at Turfway Park are worth 20-8-4-2 points to the best four running on syntehtic. Gulfstream Park and Santa Anita will host the rest of the weekend’s graded stakes action, while a listed stakes at Laurel Park could have some Triple Crown bearing later on down the road.

Here’s a rundown of the action, with times listed in Eastern.

While there are a total of three Kentucky Derby and Kentucky Oaks preps total, the attention will be focused on Solomini and his 2018 bow in the Grade 2 Rebel Stakes. After last weekend’s disqualification of McKinzie in favor of Bolt d’Oro in the San Felipe (G2), the anticipation of this colt’s return has spiked dramatically due in large part to Solomini being on the losing end of a similar disqualification in his last start. While the Rebel is an easier spot for the Zayat Stables-owned colt, there will still be other talented runners to make Solomini work for a win here, namely top local runners Sporting Chance and Combatant.

Also Saturday, Turfway Park will host the Grade 3 Boubonette Oaks and the Grade 3 Jeff Ruby Steaks. Both will run on the all weather track, and while we may not see any serious contenders for the Derby and Oaks here, there are nonetheless points up for grabs. Go Noni Go, Bet She Wins, and Consolida (GB) are the top three choices on the morning line for the Oaks, while Hazit and Ride a Comet are the lukewarm 5-1 morning line co-favorites for the Jeff Ruby.

The Pasadena Stakes carries several intriguing storylines, but the most compelling, perhaps, is Pubilius Syrus. He has been competitive in every start despite taking four attempts to break his maiden, though one of those starts was a stakes race. Since that first victory, he has gone 3: 2-1-0 in listed stakes and looks to earn a little bit more respect here. European River Boyne is quite a threat. Undefeated Heck Yea tries open company for the first time, while Ax Man, fourth in the San Vicente (G2), will give it a go on the lawn. On the opposite side of the fence, Inscom returns to the turf after an unsuccessful foray on the main track in the Robert B. Lewis (G3).

Mopotism has had the misfortune to come along at the same time as champion Unique Bella. The Uncle Mo filly really appreciates the Santa Anita track and finally earned a graded win when facing the starter without her main rival in the La Canada (G2) to begin 2018. Despite her first two races of the year, she still garnered little respect on the morning line for the Grade 1 Santa Margarita Stakes. She will face a good field, but this is her big chance to win at the highest level.

Jordan’s Henny will get closer look in Inside Information

Back in January, Jordan’s Henny lit up the Gulfstream tote board with a 59-1 upset victory in the Hurricane Bertie (G3). It was the gray filly’s first ever stakes win, though she was multiple graded stakes placed, at Gulfstream Park nonetheless, as a 3-year old last year. With that performance, Jordan’s Henny will not go off at odds that high again and has been tabbed as the 6-1 fifth choice on the morning line for Saturday’s Grade 2 Inside Information Stakes. Rich Mommy, who was third that day, returns in this spot also, as does fourth place finisher Moonlit Promise. Ivy Bell and Just Be Kind are interesting new shooters to this group, though both tend to attract racing troubles like the plague. Post time for Gulfstream’s lone Saturday stakes race is 5:04 p.m.

Besides the Rebel, Oaklawn Park's Saturday card features the Essex Handicap and the Grade 2 Azeri Stakes. The Essex drew a field of 11, topped by Dazzling Gem who rebounded off a poor effort in his 2018 debut to capture an optional claimer in fine fashion last month. Leofric, who is just one race short of being perfect at Oaklawn, looms large after a second place finish in the Razorback (G3) last month. Untrapped is a logical play, and Blueridge Traveler provides a ton of value.

The Azeri drew a larger than normal field for the distaff division at Oaklawn with eight fillies and mares lined up to run for the lion’s share of the $350,000 purse. The shipper Actress has been tabbed as the lukewarm favorite in the salty, evenly matched field. Terra Promessa looks to improve on her runner-up score in the Bayakoa (G3), while Streamline will attempt to make it two in a row after winning that event. Royal Delta (G3) winner Martini Glass, Houston Ladies Classic (G3) winner Tiger Moth, Fall City Handicap (G2) winner Blue Prize (ARG), and multiple graded stakes winner Farrell are all also part of the field.

While the Private Terms at Laurel Park does not have any immediate bearing on the Kentucky Derby picture, the race does tend to come into play in the latter two-thirds of the Triple Crown. Diamond King is another runner out the Kentucky Jockey Club (G2), which has turned into quite the key race. The John Servis trainee clipped heels and lost his rider that day but came back to be a strong third in the Swale (G3) in his sophomore debut. A strong showing here will put the colt in the Triple Crown mix beginning with the Grade 1 Preakness, Servis said. However, he will have to get through heavy favorite Still Having Fun in order to get his picture taken. Post time is 5:40 p.m.

Emma’s Encore was a Grade 1-winning sprinter during her days on the track. She last raced in 2013 at age 4 and was sent to Medaglia d’Oro to begin her second career as a broodmare. The result of that mating was First Commander, who debuts for trainer Kiaran McLaughlin in Race 8 at Gulfstream Park. I do not expect a win here as McLaughlin is only shooting 8% with first timers, and it did take Emma’s Encore five tries to get her photo taken for the first time. Post time is 3:31 p.m.