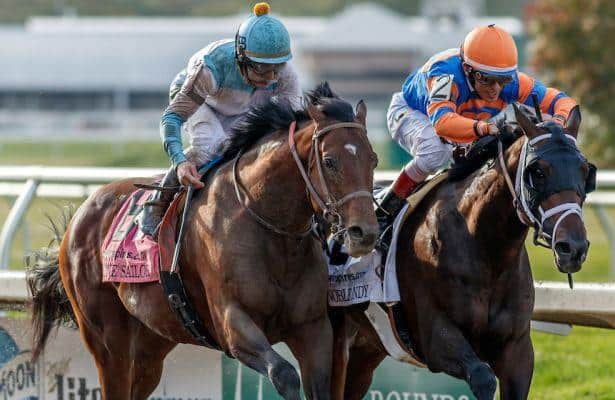 River Boyne one to beat in Del Mar Derby

A European import, River Boyne has won five of seven starts in the United States, including his last two, the Rainbow and the La Jolla (G3). The son of Dandy Man will go to post Sunday as the favorite in the Grade 2 Del Mar Derby, a nine furlong turf event for 3-year olds. The Jeff Mullins trainee is 2-for-2 at that distance and 2: 1-1-0 at Del Mar. The Mark Casse-trained Ride a Comet is the second choice on the morning line and was most recently third in Saratoga's Hall of Fame (G2). With a field of 12, and a competitive 12 at that, there is plenty of ways to make money in this race. Colts like Arawak and Pubilius Syrus could certainly make some noise at higher odds. Post time is 8:35 p.m.

Lone Sailor looking to break through in Super Derby

Trained by Tom Amoss, Lone Sailor has danced nearly every dance. The Majestic Warrior colt has not won since breaking his maiden at second asking though he has come close a couple times. He will be the one to beat in Sunday's Grade 3 Super Derby despite all that. Iowa Derby winner High North is the second choice on the morning line followed closely by Prairie Mile winner Lionite. Undefeated Autumn Warrior could be any kind, having won his first two races in state-bred company before winning his third start in open company. The rest of the field is double digit longshots. Post time is 6:05 p.m.

Dream Tree versus Mia Mischief in the Prioress

Undefeated Dream Tree will make her first start since February in the Grade 2 Prioress Stakes where she will meet grade one placed sprinter Mia Mischief. Those two will face dual grade one winner Moonshine Memories and undefeated in two starts Dream Pauline. Five other fillies complete the field. It could be a contentious pace, but Mia Mischief is a proven classy sprinter. Several of the others are proven, too, so it won’t necessarily be an easy task for the favorite(s). Post time is 5:38 p.m. Sunday.

No showdown in Del Mar Futurity

With Instagrand skipping Monday's Grade 1 Del Mar Futurity, Roadster became the undisputed favorite. The 2-year old son of Quality Road was a 4 ¼-length winner upon debut for trainer Bob Baffert. The two-time Triple Crown winning trainer will also send out third choice Game Winner, a 5 ¾-length debut winner. Rowayton deserves a look if for no other reason than jockey Drayden Van Dyke will be in the irons. Hot jockey aside, the Into Mischief colt also debuted and won nicely. Four others complete the field. Post time is 9 p.m.

War Story will be the one to beat in the 1 ½-mile Grade 3 Greenwood Cup at Parx. The 6-year old gelding is 2: 1-1-0 at that distance but is only 2: 0-1-0 over the surface. Big Dollar Bill will be cutting back in distance after winning the 1 ¾-mile Birdstone Stakes, while Todd Pletcher sends out You’re to Blame and Birdstone runner-up Hard Study.

Newly minted Grade 1 winner Voodoo Song, who's also unbeaten at the Spa, tops the Grade 2 Bernard Baruch Handicap. The English Channel colt was the gate-to-wire winner of the Fourstardave Handicap (G1) in his last outing. He will break from the rail as the lone speed in the field of six, so expect him to play “catch me if you can” again. Rivals include Synchrony, who has not been outside the trifecta this year, all in graded stakes, and Lure Stakes winner Inspector Lynley.

Recent maiden winner Mucho has been tabbed as the one to beat in the Grade 1 Hopeful Stakes. The son of Blame was second upon debut after getting bumped at the start but returned to romp to a 9 ¾-length victory in his second start. The 100 Equibase speed figure he earned was more than plenty to boost him above Sanford (G3) winner Sombeyay, whose best figure to date is the 90 he was given for his maiden-breaking debut. Nitrous has turned some heads in his two races and is 7-2 on the morning line. Mind Control and Dream Maker are also worth a look.