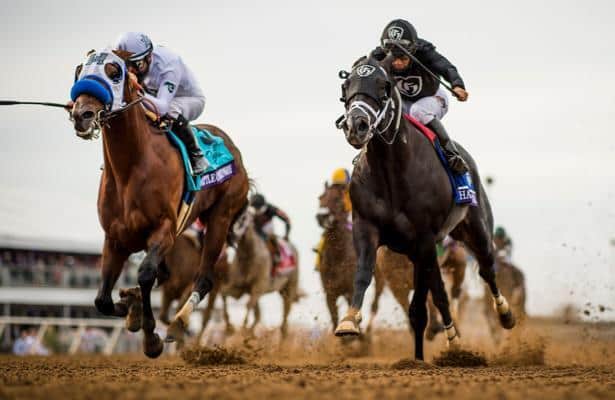 This weekend features a pair of route races for 2-year olds, set at a distance that many in their generation won’t even dream of until late spring. But in the headliner, a couple of Breeders’ Cup participants attempt to cap their year off on a winning note in the New York's final Grade 1 race of the year. There’s also the Claiming Crown at Gulfstream Park, and an exciting debut ahead. Without further ado, I present to you this Weekend’s Watch.

Sharp Azteca looks to break through at the top level

Aqueduct’s Cigar Mile is hardly Sharp Azteca’s first attempt to win at racing’s highest level, but it may finally be his time to shine. In all three of his previous attempts in Grade 1 events, the Freud colt has finished second.

The Cigar Mile drew an interesting field, but on paper, it looks like Sharp Azteca’s race to lose. Mind Your Biscuits stretches out for the second time in his career, and I don’t think he really wants to go a mile. Tom’s Ready is proficient at the distance but will have to run down the opening pace. Seymourdini is perfect at both Aqueduct and at a mile, but this is a steep rise in class for the Bernardini ridgling. And Practical Joke just has not been as good this year as he was last year.

Biblical, as the half-brother to Princess of Sylmar, was born with the burden of expectations. As a son of Tapit, in addition to what his half-sister accomplished, it has been assumed from the get go that Biblical would be a runner. It took him three tries to break his maiden, but the interesting fact behind that stat is that he improved as the distances increased, finally getting his first win when running nine furlongs. Prior to that he had finished sixth, beaten by more than 12 lengths going seven furlongs, and third, beaten by 9 ¼ lengths going 1 1/16-miles. Given that the Grade 2 Remsen is also run at 1 1/8 miles, I’d say that Biblical stands a very good chance of picking up some points toward the Kentucky Derby. If he stays anywhere near his 8-1 morning line odds, there is also value to be had.

As it stands, there does not look to be a sure-fire winner. Morning line favorite Avery Island stands at a lukewarm 3-1. Winner of the Grade 2 Nashua in his most recent start, Avery Island is another that has improved as the distances have increased. Right behind him, according to the oddsmakers, is Alkhaatam. The Shadwell-owned son of Tapit has just one career start, a fast-closing third, beaten by a mere ¾ lengths going a flat mile at Belmont. In that effort, Alkhaatam posted a monstrous 114 TimeformUS late pace. The extra furlong in the Remsen will give the colt more than enough room to run down Avery Island and Biblical in the stretch.

It’s pretty safe to say that Highway Star has had a fabulous 2017, the exception being her dismal showing in the Breeders’ Cup Filly & Mare Sprint. Prior to that 11th-place finish, the filly had compiled a 6: 3-1-1 record for the year, with wins coming in the Grade 3 Distaff Handicap, the Grade 2 Ruffian Stakes and the Grade 2 Gallant Bloom Handicap. She also ran third and second in the Ogden Phipps and Ballerina, respectively.

The winner of last year’s Grade 3 Go For Wand Handicap, Highway Star looks to potentially finish off her year on a high note. She’s a perfect 3-for-3 at Aqueduct and has won 4 of 5 starts at the Go For Wand's one-mile distance, but standing in her way is 9-5 morning line favorite Jamyson ‘n Ginger. A daughter of Champion Canadian Three-Year Old Filly Ginger Brew and Bernardini, Jamyson ‘n Ginger has really blossomed since being transferred to Chad Brown. Additionally, she’s 2: 1-1-0 at Aqueduct and is a perfect 3-for-3 going a flat mile.

So far, Daisy has done everything asked of her. She broke her maiden by eight lengths in a sprint on a sloppy track at Parx. She then followed up that effort with a 4 ¾-length romp in the Grade 3 Tempted here at Aqueduct on Breeders’ Cup weekend. That victory came at a flat mile, and Daisy is once again being asked to stretch her speed. As with the Remsen for the colts, the Grade 2 Demoiselle is run at 1 1/8-miles.

Daisy’s biggest challenge comes from Wonder Gadot. Before I proceed further, I just have to make it known how much I love this filly’s name, an ode to Wonder Woman actress Gal Gadot. Both horse and human are stars. Wonder Gadot broke her maiden on the lawn and earned her first graded victory on Woodbine’s all-weather surface. Though she finished sixth in the Breeders’ Cup Juvenile Fillies, she was only beaten for it all by 5 ¾ lengths. After that effort, the Grade 2 Demoiselle is definitely a class relief for the Canadian runner.

The first weekend in December is devoted to the hard knockers at Gulfstream Park. Known as the Claiming Crown, the day features listed stakes devoted to horses that have made their living in the claiming ranks. Distances vary, as do the conditions. While most horses that fill this series are relative unknowns to the casual player, this year there are a couple of names that are recognizable.

If you’re at all familiar with South Florida racing, then you probably know Donegal Hall. He has made 64 career starts since being unveiled in July of 2013. While he has not been wildly successful by a longshot, the fact that he’s made sixty-four career starts, all in Florida, tells us more than enough about what kind of runner he is. At 30-1 on the morning line, he will be looking to upset the six-furlong Claiming Crown Express Stakes.

Perhaps the most familiar name of the day at Gulfstream is Turco Bravo. The Chilean-bred gelding has made several appearances in graded stakes over the years, with his best effort coming in the Grade 2 Brooklyn Handicap at 1 1/2 miles. He is also Group 1 placed in his native country. The downside to Turco Bravo, however, is that he can be terribly inconsistent. For example, he has yet to record a win in 10 starts this year facing lesser company than he has faced in previous starts. However, at 8-1 in a field where the favorite is tabbed at 4-1, he is more than worth a look. He runs in the Claiming Crown Jewel, the last race on Saturday’s card.

Dream Pauline to be unveiled on Sunday.

Half-sister to grade 1 winner Dreaming of Julia, Dream Pauline will be unveiled on Sunday in Race 3 at Aqueduct. A daughter of leading sire Tapit, Dream Pauline has been training well at Belmont for trainer Kiaran McLaughlin. Dreaming of Julia won the Grade 1 Frizette at age 2 before ultimately running fourth to none other than Princess of Sylmar in the 2013 edition of the Grade 1 Kentucky Oaks. Should Dream Pauline run to her breeding, she will surely be one to be excited about leading into next year’s Oaks.