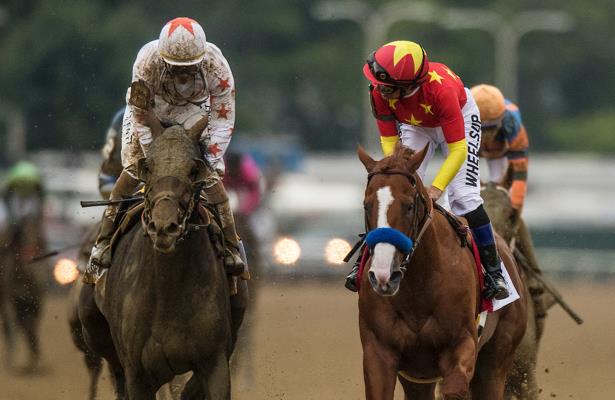 Gronkowski drops in class to headline the Grade 3 Discovery Stakes, restricted to 3-year olds and carded at 1 1/8 miles. Named for the Patriots tight end Rob Gronkowski, the colt will face a short field while also wheeling back in distance. He is the clear class of the field, but I would not count out Title Ready or Plainsman. A trio of these runners could also go in Friday's Gio Ponti, leaving the Discovery with a probable field of just four.

Disco Partner is the even money favorite to add another victory to his résumé in 2018 in the Aqueduct Turf Sprint Championship Stakes. Third last out in the Breeders’ Cup Turf Sprint, he will break from the far outside in the field of nine. This is an interesting field in that there is not any clear cut speed. If I had to predict who would end up as the pacesetter, however, I would go with the Todd Pletcher-trained Blind Ambition, who won the Elusive Quality Stakes earlier in the year in wire-to-wire fashion. Former claimer Hembree and White Flag are solid choices in this spot as well.

Trainer Chad Brown will saddle three in the Grade 3 Long Island Stakes for fillies and mares 3 years old and upward, including favored Pollara, who drew the rail going 1 3/8 miles. A Group 3 winner in France, Pollara was a troubled sixth in her North American debut after getting jostled at the start of Woodbine’s E.P. Taylor (G1). Directly to her outside is Glen Falls (G2) winner Lady Montdore, who is a perfect 2-for-2 at the Long Island distance. Brown’s other two entrants are also imports, as Lady Paname won her U.S. debut by a nose in October while group one placed Night of England will be making her first start outside of Germany.

Juveniles on display at Churchill Downs

Grade 1 winner Restless Rider could throw her hat into the Eclipse Award ring with a victory in the Grade 2 Golden Rod Stakes, an early points race for the 2019 Kentucky Oaks. Trained by Kenny McPeek, Restless Rider won the Alcibiades (G1) and ran second in both the Spinaway (G1) and the Breeders’ Cup Juvenile Fillies (G1). A victory here would not earn the filly any hardware, but she would have a compelling argument to at least be a finalist. She will face Brown’s debut winner Break Curfew. By Into Mischief, Break Curfew equaled Restless Rider’s Alcibiades speed figure in her first career start. These two should run 1-2, but I would only be mildly shocked if Gold Credit or Reflect were to win.

Breeders’ Futurity (G1) winner Knicks Go gets top billing in the Grade 2 Kentucky Jockey Club Stakes. Unfortunately for the Breeders’ Cup Juvenile runner-up, he will have to overcome post 13 in a field of 14 in order to win, while familiar foe Signalman will break from the rail. Knicks Go bested Signalman in their last two meetings, but the post positions here may just give Signalman an edge. Like the Golden Rod, this is a points race, albeit toward the 2019 Kentucky Derby. Both of this weekend’s juvenile stakes are carded for 1 1/16-mile over the same surface as both the Oaks and Derby.

While the juvenile fillies running back East will do so on dirt in the hopes of making the Kentucky Oaks field, at Del Mar, the 2-year-olds will be going a mile on the lawn in the Grade 3 Jimmy Durante Stakes. While there is no clear cut favorite, Pivottina is the morning line choice at 7-2. Last out she ran fourth in the Natalma (G1), her North American debut. Matron (G3) runner-up Monette and dual stakes winner Lakerball are also part of the field. These three fillies aside, it could be anyone’s race.

If you thought picking a winner in the Jimmy Durante was difficult, you should probably stay away from the Grade 2 Seabiscuit Handicap. I did not think it was possible, but this race is more muddled than the juvenile event earlier on the card. Synchrony is the tepid 9-2 morning line favorite in a field that contains no less than eight runners with single digit odds. My best advice is to start throwing darts.

The Grade 3 Native Diver Stakes, for 3-year olds and upward at 1 1/8 miles, attracted an interesting field. The 2017 Breeders’ Cup Dirt Mile winner Battle of Midway tops the field. Now 4, the colt was sent to stud but proved unsuccessful as a sire. After losing his first two return races, both graded events, trainer Jerry Hollendorfer dropped him into listed stakes company where Battle of Midway got a confidence-boosting win in the Comma to the Top Stakes. Graded stakes placed Gift Box returns to the races after being off since March. The 5-year old ridgling was tabbed one to watch as a juvenile but never quite lived up to his billing. He's now trained by John Sadler for Hronis Racing. Bob Baffert trained-Dabster is another that was well regarded early on but never ended up with the expected success. By Curlin, Dabster is graded stakes placed and a dual stakes winner. With only six runners in the field, however, this race is one to simply watch.

Flying Scotsman should go favored in the Grade 3 Cecil B. DeMille Stakes at a mile off an Equibase speed figure of 96 in breaking his maiden last out. Trained by Jerry Hollendorfer, Flying Scotsman was third upon debut when sprinting five furlongs. He significantly improved while stretching out in distance and is already successful at racing a mile. He drew the far outside post in the field of six. Others to seriously consider are Zuma Beach third and fourth place finishers Rijeka and Takeo Squared. With last out rival King of Speed not in this field, those two stand a much better chance of achieving a better placing here.