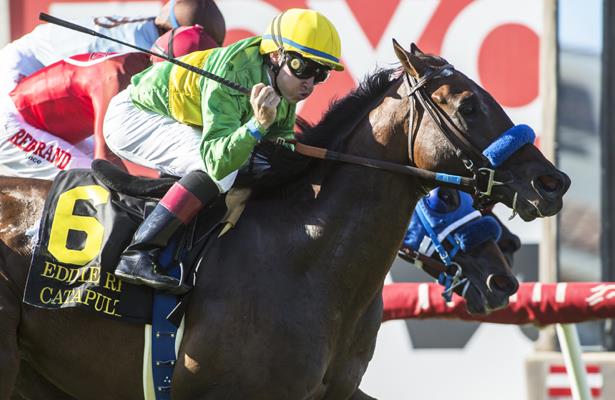 Each weekend, Horse Racing Nation previews the top races to tune into coast to coast and runs down the main contenders. All times are Eastern for this glance at Sunday's stakes of note.

Superstar in the making Guarana will try to go a perfect 3-for-3 to open career when she breaks from the rail in the Grade 1 Coaching Club American Oaks. Trained by Chad Brown, the Ghostzapper filly was a 14 ¾-length debut winner. As if that wasn’t enough, she trounced the Acorn (G1) field, which included Kentucky Oaks heroine Serengeti Empress. Tabbed as the heavy 2-5 favorite, Guarana will only face four others, including Black-Eyed Susan (G2) winner Point of Honor and Gulfstream Park Oaks (G2) winner Champagne Anyone in this race postponed from Saturday's canceled Saratoga card.

Chad Brown-trained Significant Form returned a winner just last month after receiving a rest following a disappointing 3-year old season. Some time away, along with a cutback in distance, proved key for the Creative Cause filly. She will continue to sprint as the favorite in the Caress Stakes, a 5 ½-furlong event for older fillies and mares. Veteran Morticia won’t make things easy for her, however, coming off a smart victory in allowance company. Mrs. Romana G. and Fire Key have shown recent good form and could fill out the exotics, if not spring a mild upset.

Catapult will defend his title in the Grade 2 Eddie Read Stakes. The 6-year old son of Kitten’s Joy is perfect at Del Mar and at the nine-furlong distance. His last win was at last year’s Del Mar meet, but he’s been competitive in the interim. Second choice Sharp Samurai enters off a close third in the American (G3), while Marckie’s Water won a Grade 2 event in his last outing and Bowie’s Hero ran third in the Shoemaker (G1) last out. Two others complete the field.

For trainer John Sadler and owner Hronis Racing -- always a potent combination -- Higher Power found some new life on turf last out in what was his second start for new connections. Also fifth in the Gold Cup at Santa Anita (G1), the 4-year-old by Medaglia d'Oro beat winners on the grass and will stay there as the favorite for the Wickerr Stakes. Last year's Wickerr runner-up, Bombard, also goes for trainer Richard Mandella. He has only run once since then, however, with Mark Glatt-trained Souter next on the morning line.

The Grade 3 Shuvee Stakes looks to be a match race between La Troienne (G1) winner She’s a Julie and Beldame Invitational (G1) winner Wow Cat, who will make her 2019 debut in this spot. The former already has three races in for the year, including victories in two graded stakes. Wow Cat, on the other hand, has not appeared since finishing a strong second to Monomoy Girl in the Breeders’ Cup Distaff. Wow Cat has also never been worse than third in her career, which has spanned two continents thus far. The Lookin At Lucky mare has been tabbed the 9-5 favorite in a field that will scratch from eight runners to six.